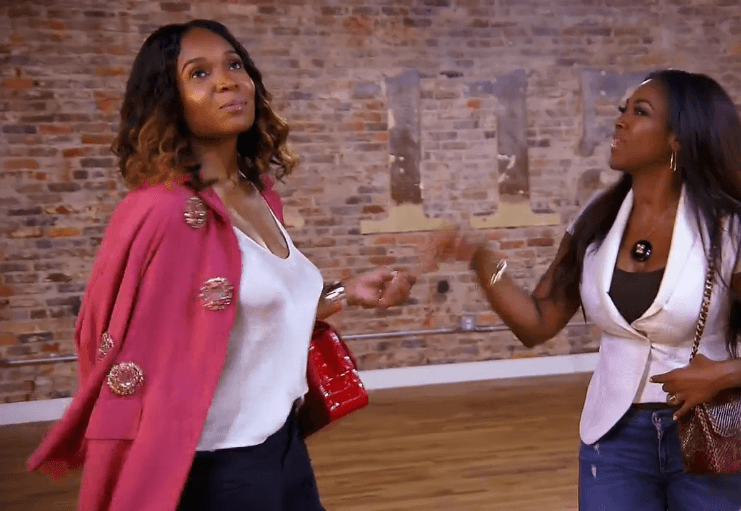 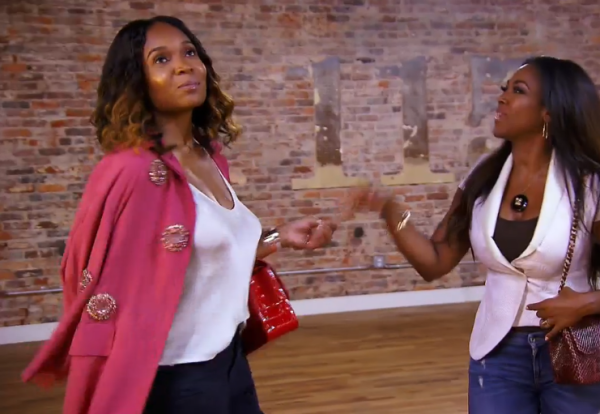 This week on the “Real Housewives of Atlanta,” the ‘build up’ is so real. It’s like they are holding out for the big drama and from the looks of the trailer for next week, that episode is when they give it to us.

Porsha and Phaedra meet for a little cleansing. And by cleansing I mean they get colonics. I don’t know who had the great idea to have them getting their poop sucked out of them while they discuss what happened at Porsha’s going away party for Duke Williams, but it was not a good one. In fact, it was disgusting. Porsha expressed how she felt about her business partners, and Kandi in particular, saying things about her man at the party. She confronts Kandi later in the episode after she does a celebrity run. Nothing to talk about there, they are still friends.

Speaking of Kandi, we see Todd and her in bed. She tells him about her conversation with Phaedra, and all he wants to know is if she is going to pay him the money she still owes. I feel you, Todd.

Now that those boring storylines are out of the way, the big stories of the night center around Kenya and the launch party for her new hair care line and Cynthia’s marriage. First up is Cynthia.

She and Leon, who is looking quite fine, meet at her house to interview a tutor for Noelle. Now that their daughter has decided to go “all in” with her singing and acting, they are homeschooling her, and the first order of business is to find someone who knows what the hell they are doing. The guy they meet with is very cute, as pointed out by Cynthia. He’s so cute that she feel he may be too good looking and serve as a distraction (for Noelle, not her of course). Leon calls her out, in front of the man and their daughter, that she is acting kind of thirsty. Got to love baby daddy’s right?

After the tutor leaves, they get real, and he asks Cynthia what’s going on. Leon mentions that people brought to his attention the video of Peter groping another woman. She tells him that things are tough right now, and she doesn’t know if she wants to stay in the marriage. Leon tells her that she is good at running away from situations and unlike other relationships, this one is different because she actually married the man. She doesn’t want to hear it but knows that it’s true. He tells her to fight for the marriage, and if it doesn’t work out, she knows that she gave it her all.

And that’s what she does. She and Peter, who is finally back in town, take some time, and they talk about their marriage, but the way Cynthia comes at Peter is harsh. He tells her how he feels and asks her at what point she stopped loving him. “I don’t know,” she tells him. You can really see the heartbreak in his eyes, and he sobs as he speaks to her. But Cynthia is emotionless and tells her husband that things have to change, or she wants a divorce. Peter, despite her ultimatums and lack of sympathy for their situation, says he is going to show her how much he loves her because he wants her and their marriage. All she can say to that is, “We’ll see.” I mean damn Cynthia. It is clear that you have checked out of the marriage already, why even try when you clearly don’t want to?

Now on to Kenya and her launch party. Her hair care line has been two years in the making, and it is finally to a place where she is ready to present it to the world. She uses the woman who helped with Cynthia’s sunglasses launch party for hers and tells her she wants it to be perfect and magical and a luxury experience.

She and Marlo, as they go through the venue telling her hired help what she wants, talks about what happened with Sheree at Cynthia’s event, and her friend tells her that she nor Sharee have any etiquette. Kenya “hears” her but also shows why she is the queen of shade. She says that she is willing to mend things with her soon-to-be-one-day neighbor as they got off on the wrong foot, all while suggesting that they should have a fundraiser for her so that she can move into her house. Wow, Kenya, just wow.

The day of her event is here and from the start, there are problems. There is no elevator, so people have to trek to the second or third floor to the venue and the major problem- It’s hot as hell. Kenya knew this could be an issue and specifically told the event planner and her friend Brandon to make sure the air is on, but their efforts are to no avail as even Kandi can’t take it and she leaves, blaming it on her pregnancy. Lucky.

Porsha and her friend, Shamea, throw nonstop shade at Kenya’s products saying that they smell like water, which is interesting because water doesn’t have a smell but whatever. Shamea is messy and comes for Kenya as soon as she walks into the room.

When Kenya arrives, she is so pissed about the heat that she doesn’t even greet anyone. She and her date walk right through the party out the door to the balcony. He urges her to go back in, but she doesn’t want to. Kenya, if you don’t get your ass back in your sweatbox party.

She finally goes in and addresses the heat issue over the mic as a way to ease the tension I guess. She joins the rest of the cast, including Kim Fields, who is there with her husband. As she makes her rounds with hugs and kisses Shamea’s ass is going to tell her, “I think they put out water instead of the product.” Bitch, who the fuck are you, like really? That was just too, unbelievably messy. Kenya shakes it off and then invites Sharee into the hall to have a talk. They address their behavior at Cynthia’s event, Kenya still throwing her shade, but they get past it and walk back into her party smiley, which makes everybody clap for joy.

The action was chill on this episode, but next week brings us some of the scandalous incidents we’ve heard about… ahem…kicks to the stomach. Very interested to see how that goes.