“Real Housewives of New Jersey” star Theresa Giudice’s family has just gone through their first day of being split up again as husband Joe entered the Fort Dix (same one as RHOA’s Apollo Nida) yesterday for a 41-month sentence.

Three months after she was released from prison her husband Giuseppe “Joe” Giudice, who also stars in the Bravo reality TV show, has entered a federal correctional facility to service time for similar charges.
Giudice surrendered to authorities at noon Wednesday to serve a 41-month sentence at Federal Correctional Institution, Fort Dix (FCI Fort Dix) in New Jersey for bankruptcy fraud charges, according to the family attorney James Leonard Jr.
“His brother, his sister and several other members of the Giudice family, as well as myself, were present when he turned himself in to the prison, including Teresa. It was obviously a very emotional day, but this is a very strong family with a tremendous support system, and they will get through this, just as they did when Teresa was away,” Leonard said in a statement. 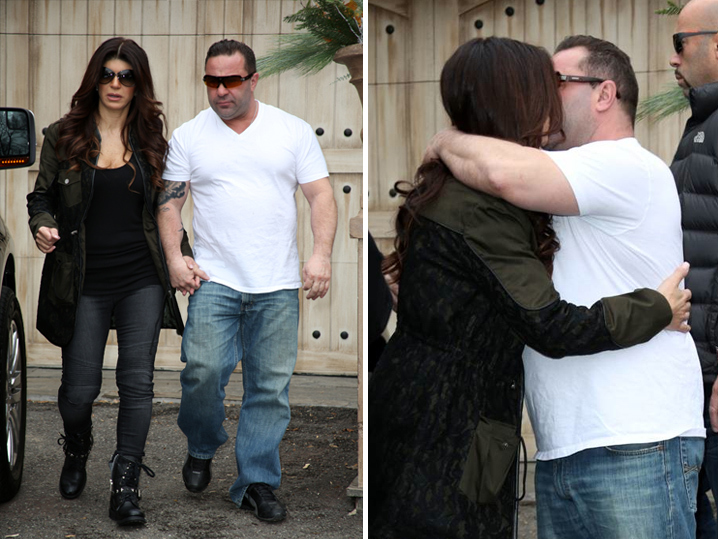 Teresa Giudice served 15 months at the low-security Federal Correction Institution in Danbury, Connecticut, before she was released December 23, 2015.
In 2014, the couple pleaded guilty to charges of mail, wire and bankruptcy fraud, totaling 41 counts.
Martha Stewart’s prison coach Doc Fuller said that Giudice will find prison to be pretty unpredictable (sometimes like his wife’s moods), but he should be able to find guidance inside if he seeks it out.
“It can be very dangerous,” said Fuller, 53, who served six years at Fort Dix (he was released in 2002). “He’s Italian. So the Italians there will embrace him. They’ll be very familiar with who he is … They’ll make sure he has his shower shoes; they’ll show him the ins, they’ll show him the outs. Not that he totally has to trust all of them, but the Italians at Fort Dix are pretty close-knit.”

But Fuller doesn’t believe the reality star’s fame will acclimate him any faster. He won’t be allowed any conjugal visits so if he’s to have sex in the next three years; it won’t be with his wife.

“I don’t think it will help in the sense that he’s going to get certain privileges from staff members per se,” he explained. “From the standpoint of inmates, if someone’s jealous of him, they might want to set an example. I don’t anticipate him getting into a serious confrontation unless he mistakes someone’s kindness for weakness.”

Joe, who drinks four bottles of wine a day, has previously said prison will offer a much-needed break from booze. Fuller hopes Joe started his detox phase well before surrendering.

“If he’s still on alcohol, if he’s still drinking and he has a serious drinking problem, it could put him in a bad situation,” Fuller advised.