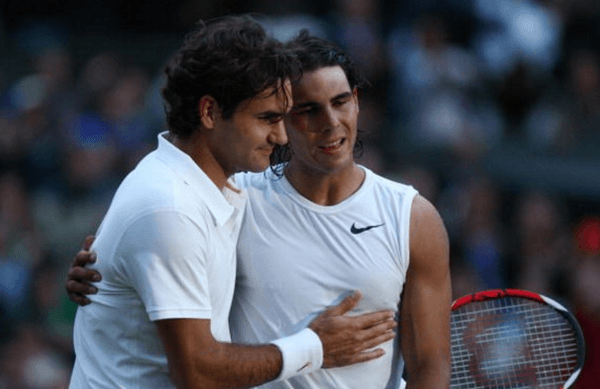 Roger Federer, the current World No. 3, is into the final of ATP Basel for the 12th time in his career. The Swiss player, playing in what is considered his home tournament, defeated America’s Jack Sock in a fairly routine semifinal victory on Saturday 6-3, 6-4. The win seemed fairly easy relative to the three-setters that Federer played in earlier rounds against both Philipp Kohlschreiber and David Goffin.
However the final, for Federer, promises to be anything but easy. The World No. Three will next face Rafael Nadal, a player who had a rough go in Basel this week but one that should have a lot of confidence against Fed in the final.
Nadal, in his semifinal, survived a couple of well-contested sets against Richard Gasquet. But the match was different than the other ones in Switzerland this week in one way. Previously Nadal had been extended to three sets in each of his matches. Of note, Rafa was down a set and a break to Lukas Rosol way back in the tournament’s first round. The Spaniard, in making the final after a tough week, has definitely displayed the perseverance that has earned him so many fans over the years.
Federer and Nadal have not been meeting with that much frequency on tour in recent seasons. In fact, it has been almost two full seasons since their last match, one that came at the 2014 Australian Open. Since that time, it has been Nadal whose game has declined however the fact remains that the Spaniard is 23-10 against Federer overall. Furthermore, a trend within that trend is Nadal’s current five-match winning streak against the Swiss Maestro.
The last time Federer beat Nadal was back in 2012 in the Indian Wells final. While the Swiss will surely ground some optimism in the fact that he is playing in Basel, one of Federer’s best events, the Basel final has not always been a cinch for him. Federer has losses to Juan Martin del Potro (x2) and Novak Djokovic in the championship match of the 500-series event since 2009. With Nadal regaining some confidence, there should be all to play for in the Basel final this season.
The championship match will start not before 2:30 pm local time with Federer considered the favorite despite the losing streak to Nadal (source: bet365).
RELATED NEWS
How to Enjoy Sports Betting In 2020