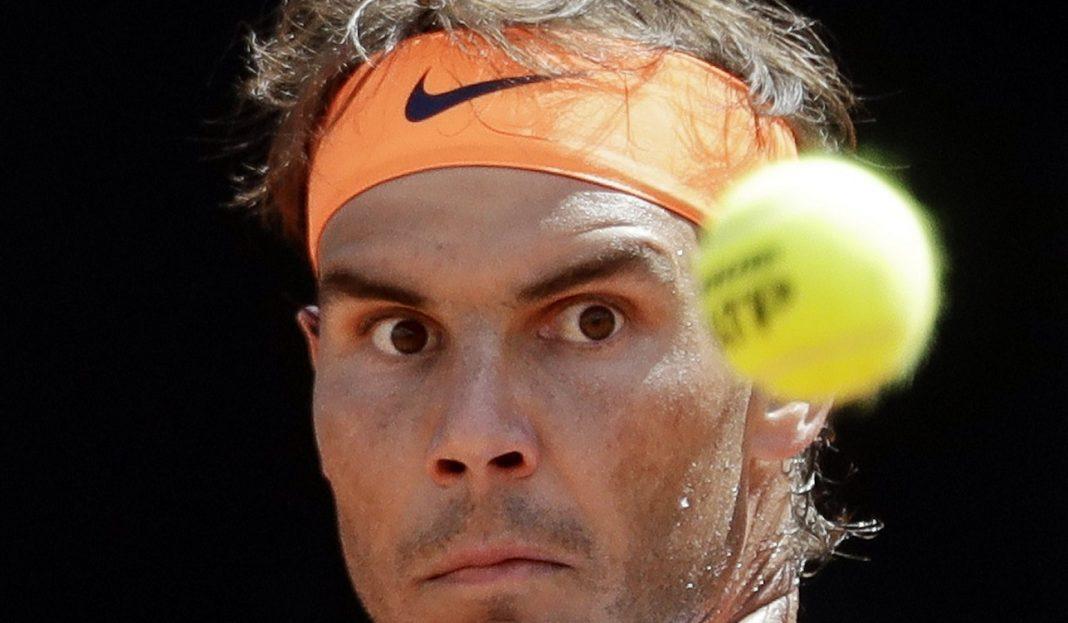 Rafael Nadal is back swinging hard to defend his King of the clay courts nickname moving ahead to the semi-finals of the 2019 Italian Open on Friday. He was able to defeat fellow Spaniard Fernando Verdasco as Novak Djokovic worked over Juan Martin del Potro moving him to the semi-finals also.

Nick Kyrgios still seems to have a chip on his shoulder as he commented about Roger Federer not requiring automatic respect on the court and John Isner pulled out of the French Open due to an injured left foot.

Rafa Swings Back Into Semi-Finals

The eight-time Rome champion came through 6-4, 6-0 in 1hr 38min to set up a clash with Greek eighth seed Stefanos Tsitsipas for a place in the final.

He’s conceded only six games in six sets at the Foro Italico, but he’s reached the semifinals.

Nadal has fallen in the semifinals of his last three tournaments — all on his favored clay. And next up is Stefanos Tsitsipas, whom Nadal lost to in Madrid last week.

“I know what happened last week, and I (am) going to try to do it better tomorrow,” Nadal said. “I have to hold the level or increase a little bit more. If that happens, I (am) going to have my chances. The good thing is during the last month my feeling is every week was better than the previous one.”

“Every year, we make (a) prediction with the team which player is going to be at the top 10 at the end of the season,” Nadal said. “I put Tsitsipas there. … He started even better than what I (expected). He deserves to be where he is now.”

Roger Federer’s withdrawal with a right leg injury earlier in the day had handed Tsitsipas a ticket to the last four.

The 32-year-old Nadal, seeded second, is bidding for his first clay-court title this season before chasing a 12th French Open crown at Roland Garros starting on May 26.

Top-ranked Novak Djokovic outlasted Juan Martin del Potro 4-6, 7-6 (6), 6-4 in an entertaining slugfest that lasted more than three hours and finished after 1 a.m. local time at the Foro Italico. Djokovic had to save two match points to deny Del Potro a place in the final four as he won.

The 31-year-old took control of the game half-way through the third set and will now face Argentine Diego Schwartzman in the semi-finals at tournament in Rome.

“I never lost faith I could come back into the match,” Djokovic said.

“One break of serve, mini break in the tie-break when he was 6/4, more or less open forehand that he was making the entire match, that’s all it took for me to come back.

Djokovic saved a match point in the second-set tiebreaker and was frustrated at times, receiving a warning for slamming his racket to the clay early in the third. But the Serb regained his composure and closed it out by serving an ace on his first match point.

The Serbian tennis star next faces Diego Schwartzman, who beat Kei Nishikori for the first time in four tries, 6-4, 6-2, to reach his first Masters Series semifinal.

Djokovic is now only one match away from reaching his second consecutive ATP Masters 1000 final.

Del Potro, who was competing in only his third tournament of the season, came into the contest knowing he had lost seven of his past eight meetings with the Serbian.

However, the Argentine battled Djokovic from the baseline in the early exchanges and took the opener off a backhand winner down the line.

“I lost probably the positioning of the court over him,” Djokovic said about Del Potro.

“Towards the end of the first, he just started hitting the ball really well from both corners, also backhand side, backhand down the line.

“He was playing really well, gave me a lot of trouble.”

As the match progressed Djokovic relied more and more on his drop shot to break up the baseline rallies.

When the match moved into Saturday as the clocked ticked past midnight, both players tried to rally the crowd to their side.

But it was Djokovic who grasped the advantage in the third set when Del Potro netted a sitting forehand in the fifth game.

The 30-year-old South American, who missed most of this season because of a knee injury, wouldn’t see another break opportunity for the remainder of the match.

Roger Federer should not automatically be given respect on the tennis court, according to Nick Kyrgios.

Federer has won 20 Grand Slam tournaments and is eight ATP titles away from Jimmy Connors’ all-time record of 108.

Kyrgios has been causing waves against the likes of Federer, Rafael Nadal and Novak Djokovic and boasts an impressive head-to-head record against the trio.

The controversial Australian is hoping to add some spice to tennis and has called on lower-ranked players to follow suit.

“When I would walk out on the court against Nadal, Djokovic, Federer, any of these guys, I don’t understand why I need to respect them automatically,” Kyrgios told the No Challenges Remaining podcast.

“All they do is hit a ball over the net.

“Off the court, Federer is doing unbelievable things.

“Off the court he is an absolute champ. He is creating lives for people.

“But on the court I don’t need to all of a sudden give him respect.”

Interestingly enough, Federer defended Kyrgios saying he shouldn’t be suspended because his chair throwing at the Italian Open.

John Isner has pulled out of the French Open because of an injured left foot, ending his streak of 24 consecutive appearances at Grand Slam tournaments.

The 34-year-old Isner announced his withdrawal Friday on Twitter.

He is ranked No. 11, the top American man, but has not competed since hurting his foot during the Miami Open final March 31.

Isner was a Wimbledon semifinalist last year, his best Grand Slam performance. He hasn’t missed a major since the 2013 Australian Open.

He’s reached the fourth round at Roland Garros three times, including in 2018, and is one of only two men to push 11-time champion Rafael Nadal to a fifth set there.

Isner is best known for winning the longest match in tennis history, 70-68 in the fifth set against Nicolas Mahut in Wimbledon’s first round in 2010. The match lasted more than 11 hours over three days.