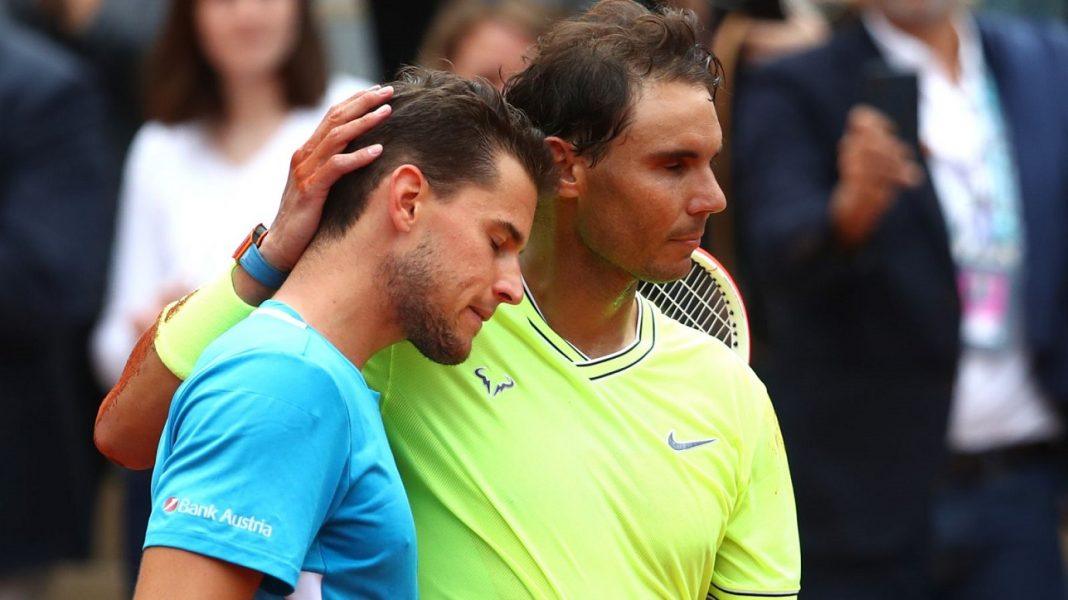 Rafael Nadal got what he came to the 2019 French Open for. A 12th title. For fans expecting to see him win that against Novak Djokovic, it was a bit of a disappointment, but his match against Dominic Thiem was well worth it.

It all took a toll on Thiem, both physically and mentally, and that left him in no condition to do what it would take to beat Rafael Nadal in the French Open final.

Just to earn the right to face Nadal for the title at Roland Garros for the second year in a row Sunday, Thiem needed to end No. 1 Novak Djokovic’s 26-match Grand Slam winning streak. That took five sets over 4 hours, 13 minutes spread over two rain-interrupted days.

Then, less than 24 hours after that one concluded, Thiem needed to step on court for the fourth consecutive day to try to deal with Nadal and everything that entails. For the final’s opening two sets, Thiem was able to hang with the man known as the King of Clay. And then?

“I had a little drop, which is, against most of the players, not that bad,” Thiem said, “but he took the chance and stepped right on me.”

Nadal reeled off 16 of the initial 17 points in the third set on the way to taking 12 of the last 14 games in a 6-3, 5-7, 6-1, 6-1 victory over Thiem. That gave Nadal his 12th French Open title and 18th Grand Slam trophy overall, while denying Thiem what would have been his first major championship.

There was no doubt for Thiem what played a role.

After all, he was trying to do something only three men have in the professional era, which began in 1968: beat the No. 1 and No. 2 seeds at Roland Garros.

“Beating Novak over two days, with all the interruption,” said Thiem, a 25-year-old Austrian who was seeded No. 4, “it leaves traces on the body and also on the mind.”

That, especially, is not an ideal way to face Nadal on the red clay of Paris, where the guy has won 93 of 95 career matches.

Still, Thiem gave it a go over the first 100 minutes, hanging with Nadal on exciting exchanges from the baseline that seemingly wouldn’t end, just because both men are so adept at covering the court so well. By match’s end, there were 46 points that lasted at least 10 strokes, and Nadal and Thiem both won 23.

Only one of them was able to sustain the high level of focus and stamina for the third and fourth sets, though.

“Maybe,” acknowledged Thiem’s physical trainer, Alex Stober, “he was running out of fuel a little at the end.”

During the trophy ceremony, Nadal repeatedly praised his opponent, saying that he expects — and hopes — that Thiem will one day hoist aloft that silver symbol of excellence.

So, too, of course, does Thiem himself.

He kept talking about next year.

“I’m on the right way. And I failed today, but my goal and my dream is still to win this tournament or to win a Grand Slam tournament. I will try my best next year again,” Thiem said. “I gave everything I had in these two weeks.”

Thiem wasted two match points with quick unforced errors when serving for the victory at 5-3 in the fifth, but he made his third chance count, smacking a forehand winner to break Djokovic in the last game.

“It’s never easy to go on, go off, put the system on 100 percent and go down to zero percent in the locker,” Thiem said. “But if you win, everything is good.”

The top-ranked Djokovic had trouble with Thiem, to be sure, but also with the weather, with the chair umpire and with his odd propensity for heading to the net much more often than usual, including some serve-and-volleying that often failed.

“Look, there is always something large at stake when you’re one of the top players of the world and play in the biggest tournaments,” Djokovic said. “These kind of matches, one or two points decide a winner.”

He was stopped two victories short of collecting his fourth consecutive major championship, a run that began on the grass at Wimbledon last July, then continued on the hard courts of the U.S. Open and Australian Open.

Instead, it is Thiem, an Austrian ranked No. 4, who now gets a chance to win his first Grand Slam trophy on the red clay of Roland Garros.

Thiem will face 11-time French Open champion Rafael Nadal on Sunday in a rematch of last year’s final. Nadal won that one, part of an 8-4 lead for the Spaniard in their head-to-head series.

“All the time, if someone reaches the finals here, it’s against Rafa,” Thiem said with a laugh.

It will be the fourth straight day that Thiem is in action because of postponements, whereas Nadal will be well-rested, having played his quarterfinal Tuesday and his semifinal Friday, when he beat Roger Federer 6-3, 6-4, 6-2.

The women’s final followed Thiem-Djokovic at Court Philippe Chatrier on Saturday, with No. 8 seed Ash Barty of Australia against unseeded 19-year-old Marketa Vondrousova of the Czech Republic. Neither had ever participated in a major singles final.

On Friday, Thiem had just broken Djokovic to go up a break at 3-1 in the third set when their match was suspended because of a shower. They resumed 18½ hours later, in dry, breezy conditions. The wind that was so fierce Friday — spreading loose, rust-colored clay dust from the court surface all over the place, making for something that seemed like a sandstorm — was much more manageable Saturday. It rippled players’ shirts but did not cause havoc with serve tosses and shots the way it had the evening prior.

They repeatedly engaged in long and entertaining baseline exchanges that lasted 10 shots, 20 shots or more. They used speed and anticipation to track down each other’s shots. They walloped the ball from all angles.

The very longest of these tended to go Djokovic’s way: He won 37 of 61 points (61 of nine or more strokes.

For whatever reason, Djokovic felt compelled to try to shorten points on occasion, hardly his usual strategy.

So that led to this key statistic: He won only 35 of 71 points when he went to the net. Thiem, meanwhile, took 18 of 20 on his more judicious forays forward.

The most glaring examples of this came at the end of the third set, when it appeared Djokovic might really be letting the whole match get away.

Serving at 15-all while down 6-5, Djokovic was agitated by a warning from chair umpire Jaume Campistol for letting the serve clock expire and wouldn’t let it go, complaining during the game and, more vociferously, at the changeover, so much so that he was called for unsportsmanlike conduct.

The lack of focus drifted into his choices during points, too, including a mediocre volley that let Thiem deposit a backhand passing winner for a fourth set point. Yet another serve-and-volley attempt came next, and Thiem produced a low forehand return right at Djokovic’s feet to end the set.

All match, Djokovic kept digging a hole, then climbing out. Could he do it again?

He was three points from defeat while serving at love-15, down 5-4 in the fourth set, but came through there to hold, broke in the next game when Thiem double-faulted, and forced a fifth.

Then Djokovic got broken to trail 3-1 in the deciding set when he missed a volley, and Thiem held for 4-1.

At deuce in the ensuing game, a shower came. Shortly before they came back to play, Djokovic tried to stay loose by playing soccer with a tennis ball while Thiem did sprints in a stadium hallway.

On the first point when they returned, Djokovic paused, thinking a shot by Thiem landed out. Campistol ruled it was in. Djokovic eventually took that game. But he was a point from losing when Thiem served at 5-3, 40-15. Except, Thiem just couldn’t close. Couldn’t do much of anything.

That could have been it for him. Hard to recover from that sort of collapse, especially against someone like Djokovic.

But Thiem regrouped in time. It was Djokovic who faltered, something not seen on a Grand Slam stage since the 2018 French Open quarterfinals.