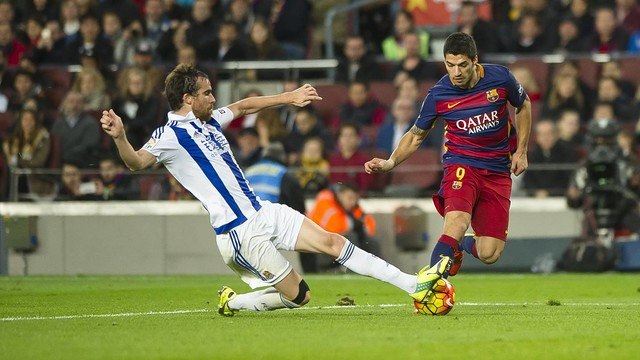 Barcelona continued their struggles at the Anoeta on Saturday night to lose to Real Sociedad 1-0 which reduced their lead at the top of the league table to a mere three points over Atletico Madrid.

Heading into week 29 of the league, Barcelona were up against Villarreal away at the Madrigal. And at the time, the Catalans had a formidable 11 points lead over Los Rojiblancos, meaning they had a firm stronghold on their second successive league title. But Luis Enrique’s men threw away a two-goal lead to draw 2-2 against Marcelino Garcia Toral’s men.

The following week, Barcelona lost 2-1 in the Clasico against Real Madrid to further cease their advantage in the title race and now with their defeat at the Anoeta, the title race appears to have been thrown wide open.

Barcelona have always struggled at the Anoeta. It is the ground where Pep Guardiola could never win in the league during his four years as the manager of the Camp Nou outfit. Tito Vilanova’s and Tata Martino’s solitary years as Barcelona’s first team bosses ended without a win at the formidable ground of the Basques.

And now Enrique has suffered 1-0 defeats at Real Sociedad’s home in both of his seasons as the first team boss of Barcelona.

So what does the Catalan team’s loss mean for the title race? For starters, Barcelona still hold a three-point lead over their nearest title rivals Atletico Madrid and are a further point ahead of Real Madrid.

Technically, the Catalans can be considered four points ahead of Los Rojiblancos and five ahead of Zinedine Zidane’s men, owing to the fact that they hold an advantageous head-to-head record – in the Spanish league head-to-head record is used to decide the winner in case two or more teams are tied on the same points tally at the end of the season.

Also, Barcelona seems to have the easier run-in of the three teams heading into the final six games of the season. They will be facing Valencia at home, Deportivo La Coruna away, Sporting Gijon at home, Real Betis away, Espanyol at home and then Granada away in the final game of the season.

On paper, Deportivo away looks to be the toughest game. And with all the other teams in the bottom half of the table, the league still remains Barcelona’s to lose.

However, Atletico Madrid and Real Madrid, having now been given an unexpected look-in in the title race, will be eager to take the battle to the final day.

Atletico’s last six matches read: Granada at home, Athletic Bilbao away, Malaga and Rayo Vallecano at home, Levante away and Celta Vigo at home. Whereas the corresponding fixture list for Real Madrid reads: Getafe away, Villarreal at home, Rayo Vallecano and Real Sociedad away, Valencia at home and Deportivo La Coruna away.

Barcelona still have the title well in their grasp, but they cannot afford any more slip ups. But for the neutrals, the title race has definitely been spiced up!