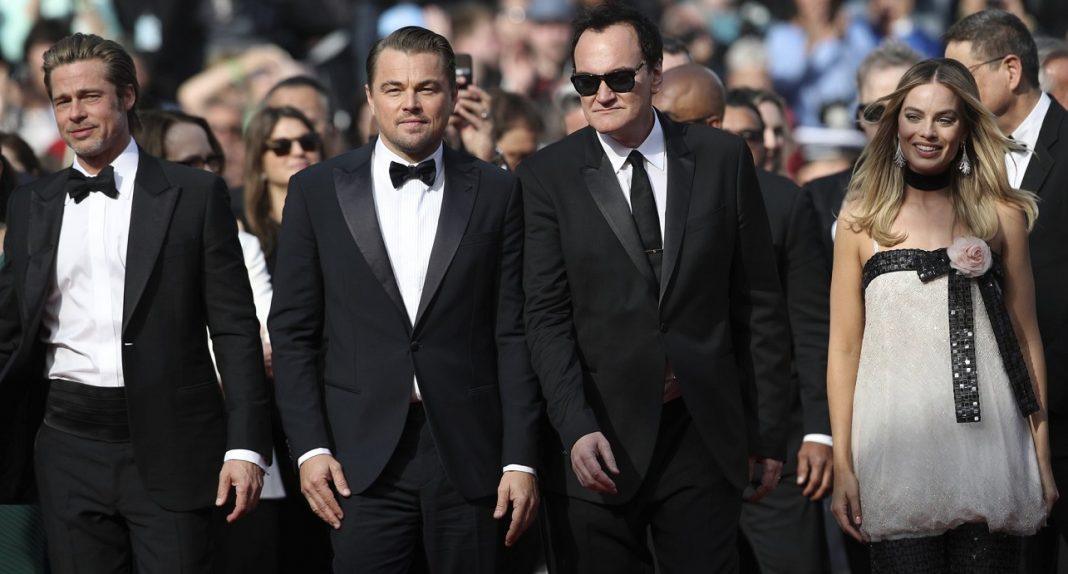 Quentin Tarantino fans expect a lot of blood, noise, guns, and explosions from his films, but as the director has gotten older, he’s taken a shot with a more mellow take in “Once Upon a Time In … Hollywood,” and it’s paid off. After the film ended, a standing ovation erupted lasting many many minutes.

Elle Fanning blames her dress for her collapse, and Terrence Malick’s “A Hidden Life” made an appearance although the filmmaker wasn’t so easy to find.

Twenty-five years after premiering “Pulp Fiction” in Cannes, Quentin Tarantino returned to the French film festival with neither great vengeance nor furious anger but a gentler fairy tale about 1960s Los Angeles.

“Once Upon a Time In … Hollywood” made its much-anticipated debut Tuesday in Cannes, giving the festival its most concentrated splash of celebrity and frenzy. The film’s two stars, Brad Pitt and Leonardo DiCaprio, brought a fittingly old-school Hollywood glamour to the Cannes red carpet, where throngs of onlookers swelled along the Croisette.

Much of the plot of “Once Upon a Time In … Hollywood” had been carefully kept under wraps leading up to the premiere. DiCaprio plays a Westerns actor anxious that his notoriety is slipping. Pitt plays his stunt double, friend and, because of a drunk driving offense, his driver. Though set against the backdrop of the Manson Family murders, much of Tarantino’s film is invested in recapturing the radiance of a bygone Hollywood.

For a filmmaker often associated with blistering dialogue and ecstatic explosions of violence, “One Upon a Time in … Hollywood” finds the 56-year-old Tarantino working at a more relaxed pace, spending generous amounts of time in odes to spaghetti Westerns and ’60s TV shows.

Ahead of the premiere, Tarantino, whose “Pulp Fiction” won the Palme d’Or in 1994, issued a statement to festival audiences imploring them not to spoil the film for future moviegoers — a request repeated before the film’s press screening. Journalists lined up hours in advance.

“Once Upon a Time in … Hollywood” is Tarantino’s first movie not being released by Harvey Weinstein. After Tarantino cut ties with the disgraced mogul, the project attracted the interest of most studios. Sony Pictures landed the film and gave it a $95 million budget — a very rare gamble on a high-priced original movie.

Instead of superheroes or intellectual property, “Once Upon a Time in … Hollywood” will instead bank on the draw of Tarantino and his two movie stars. Margot Robbie also co-stars as Sharon Tate.

Columbia Pictures released the new trailer for the film shortly before it premiered at Cannes.

The film tells the story of stars Brad Pitt and Leonardo DiCaprio‘s respective characters, Cliff Booth and Rick Dalton, as they try and navigate an evolving Los Angeles as the city and its starry inhabitants enter the early 1970s. Tarantino — who serves as the film’s director, producer, and writer — describes it as “a story that takes place in Los Angeles in 1969, at the height of hippy Hollywood.”

In addition to Dicaprio and Pitt, the film stars Margot Robbie as the late actress Sharon Tate who, in real life, was murdered in August 1969 by followers of Charles Manson. Along with Pitt, DiCaprio and Robbie, “Once Upon a Time in Hollywood” features an impressive cast including Al Pacino, Damian Lewis, Dakota Fanning, Emile Hirsch, Timothy Olyphant, Kurt Russell, Bruce Dern and the late Luke Perry, among others.

“I’ve been working on this script for five years, as well as living in Los Angeles County most of my life, including in 1969, when I was seven years old,” Tarantino has said of the film. “I’m very excited to tell this story of an L.A. and a Hollywood that don’t exist anymore. And I couldn’t be happier about the dynamic teaming of DiCaprio and Pitt as Rick and Cliff.”

“Once Upon a Time … in Hollywood” will be released in U.S. theaters July 26.

Elle Fanning says she fainted at a Cannes Film Festival dinner because her dress was too tight.

The 21-year-old actress collapsed at the Chopard Trophee dinner Monday evening at Cannes. Fanning later posted a message with a thumbs-up photo on Instagram saying she was “all good” despite what she called a fainting spell from her snug Prada gown.

Fanning is on the jury in Cannes. She’s the youngest person ever to be on the nine-person panel that will decide the Palme d’Or.

“Have you seen Terrence Malick?”

It’s a familiar question for the famously press-shy filmmaker that was, predictably, hollered again Monday at the Cannes Film Festival. Malick, whose “Tree of Life” won the Palme d’Or in 2011, returned to the French festival with a movie whose title could double for a description of the seldom-seen director himself: “A Hidden Life.”

The film, based on the true story of an Austrian conscientious objector to Adolf Hitler’s army in World War II, premiered Sunday night in Cannes where Malick was, in fact, in attendance. Though he eluded the festival’s red carpet photographers, a tuxedoed Malick was given a warm standing ovation following the film. The filmmaker — whom TMZ (not known for the most refined taste in film) has called “a Hollywood Bigfoot” — was even caught in a handful of photographs that quickly circulated on social media.

Perhaps that made some in the Cannes press corps hopeful that Malick would show up at the film’s press conference Monday, too. After all, the reclusive Jean-Luc Godard called in to talk to reporters on FaceTime last year. But the lone representatives for the film — stars August Diehl and Valerie Pachner — had no response to shouts about Malick’s whereabouts other than: “We don’t know!”

The more exciting reveal for critics, anyway, was “A Hidden Life.” The film is about Franz Jagerstatter (Diehl), who refused to fight for the Nazis. When he’s imprisoned, his wife (Pachner) raises their three daughters alone while tending to their alpine farm on a lush mountainside.

“A Hidden Life,” which runs about three hours, was hailed by some critics as the director’s best film in years, perhaps since “The Tree of Life.” In some critical quarters, Malick’s more recent output — including “To the Wonder,” ″Knight of Cups” and “Song to Song” — have grown too full of performative bliss, and lack the cohesion of earlier films like “The New World” and “The Thin Red Line.”

While “A Hidden Life” may not win back many who have strayed from Malick’s flock, its majesty is more grounded in a linear narrative, one deeply rooted in spirituality and faith. IndieWire called it a “lucid and profoundly defiant portrait of faith in crisis.” Variety called it “an epic return to form.”

Fox Searchlight acquired “A Hidden Life” shortly after its premiere.

As is often the case with Malick’s productions, the film was shot years before finally seeing the light of day. Diehl and Pachner said they, too, patiently awaited updates on its post-production progress.

“It seems to not be a linear process this editing. It’s more like circles,” said Pachner. “We talked to Terry and the editors throughout those two and a half years, and they’d always be like: ‘It’s so good you didn’t see it already because now it’s so different now and it’s so much better now.’”

The passage of time was enough to see several of its actors, Bruno Ganz and Michael Nyqvist, pass away in the interim. But Diehl said the arrival of “A Hidden Life” is timely.

“The person who says, ‘No’ — this is getting more and more rare in our whole world. We’re all jumping on one train and saying, ‘Yes, that’s the world now. We have to go with it,’” said Diehl. “If there would be more people like this, especially right now in Europe with all the political developments, it would maybe be a solution. Maybe that’s a bridge to our days.”

Diehl pointed to the rise of the far-right in Europe and elsewhere as a further connection to “A Hidden Life.” Later this week, elections to the European Parliament will be held in 28 countries.

“It is time to stand up against all this right-wing development in the whole of Europe. It’s going a very wrong way,” said Diehl. “We all have our private choices to make. Our voice counts, I think. Each voice.”