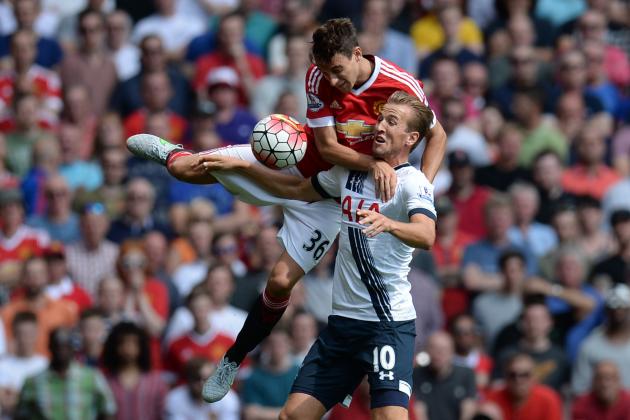 Tottenham stay in the Premier League title race after beating Manchester United 3 – 0 at White Hart Lane on Sunday. With five games remaining, they still have a hope of reducing Leicester’s seven points lead at the top of the table.

Leicester City grabbed their fifth successive league win against Sam Allardyce’s Sunderland on Saturday. Jamie Vardy delivered the goods for the Foxes after a goalless first half at the Stadium of Light. The England international has now bagged 21 goals and 6 assists this season, and he is just one goal behind the leading goal scorer, Harry Kane.

Tottenham picked up three crucial points at home against the 20-time English champions. The game remained scoreless in the first half, but the North Londoners scored three goals within six minutes in the second half to the delight of Spurs supporters. Manchester United were totally outplayed and Louis van Gaal took all the blame for his tactics and playing players out of position. Tottenham have now extended their lead over arch-rivals Arsenal, who drew 3 – 3 against West Ham.

The Gunners picked up a point as Andy Carroll scored a hat-trick at Upton Park. Arsenal can’t afford more slip-ups as fourth-placed Manchester City are just two points behind them.

Chelsea will need to bounce back from the 1 – 0 defeat at Swansea. The Blues succumbed to Sigurdsson’s 25th-minute strike, which was enough to grab the maximum points for the home team. The Londoners are currently tenth in the Premier League table, but they can still realistically reach the Europa League spot by the end of this campaign.

Liverpool won 4 – 1 against Stoke City on Sunday. A brace by Divock Origi and a goal each by Moreno and Sturridge earned the Reds three more points. The Merseyside giants are currently eighth in the league table, but they are still in contention for the Champions League spot as they have two games-in-hand.

Aston Villa continued their losing streak with a 2 – 1 loss at home against Bournemouth. The Villans have now lost 23 of their 33 games so far. Not even a miracle can save them from relegation, and it is very likely that their demotion will be official as soon as this weekend.

Puncheon netted the winner in Crystal Palace’s 1 – 0 victory over Norwich. Southampton beat Rafa Benitez’s Newcastle 3 – 1 and the Toons’ future doesn’t look very bright at present. They along with Sunderland and Norwich will have to fight till the very end to take hold of the 17th spot in the league table. This is certainly the most unpredictable season of the Premier League era and it deserves a special end with some exciting encounters.