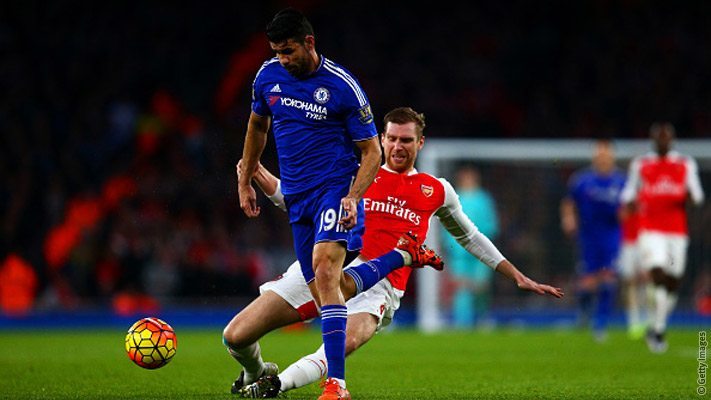 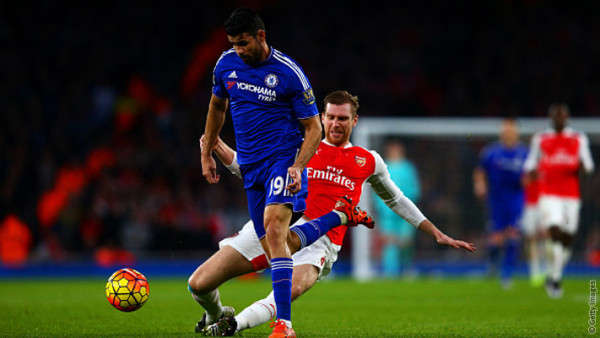 Chelsea defeated the table toppers Arsenal 1 – 0 at the Emirates on Sunday, allowing Leicester City to go top of the table.

Per Mertesacker got his marching orders in the 18th minute of the match after a reckless challenge on Diego Costa. Chelsea struck a 23rd-minute winner to continue their seven-match unbeaten run. Guus Hiddink’s men are now 13th in the league table, and it seems that they can reach their aim of Europa League football. The Gunners are now down to the third spot as Manchester City have leapfrogged them with their superior goal difference.

Claudio Ranieri’s Leicester grabbed a 3 – 0 win at home against Stoke at the weekend. Jamie Vardy got back on the scoresheet after a goal drought of more than ten hours. They now point clear at the summit. Pellegrini’s Man City drew 2 – 2 at West Ham but they are breathing down Leicester’s neck, and they seem ready to pounce at the next available opportunity.

Manchester United lost 1 – 0 to Southampton at home on Saturday. Charlie Austin’s debut goal for the Saints for just his second touch after coming on as a substitute. The Old Trafford faithful were immensely displeased with the defeat and the jeers surrounded the stadium after the referee’s final whistle. The fans are actively demanding the sacking of manager Louis van Gaal, which seems very likely at the moment.

When asked whether he feared for his job, Van Gaal replied: “I cannot answer that.

“I don’t know, but it was a poor performance, of course, because football is not only defending but creating chances and we didn’t create any chance.”

“It was a poor game for the fans,” admitted Van Gaal. “I cannot change feelings, only work hard with the players. That is what I am doing. I put a question: how can we change this? That is my job. It is not an easy job.”

“You cannot say [the fans] are not right. They are right and of course, they are disappointed, and they have the right to boo me, but we have to stick together in this period because we have a lot of injuries, and we have to wait and see.

Norwich played host to Jurgen Klopp’s Liverpool in the early kick-off on Saturday. There was a lot of excitement and drama in the fixture that ended 5 – 4 in favour of the visitors. Tottenham also came back from behind to win 1 – 3 at Crystal Palace. Dele Alli scored the best goal of the weekend in the Premier League, and it certainly will be amongst the contenders for the ‘Goal of the season’.

Aston Villa managed a goalless draw against West Brom, but they are six points behind their closest competitors Sunderland. The 20th placed Villans will need a spectacular run in the league to stand a chance of escaping relegation. Sunderland and Newcastle are also involved in the relegation zone, and they’d want to climb above either of Norwich, Bournemouth, Swansea as soon as possible.