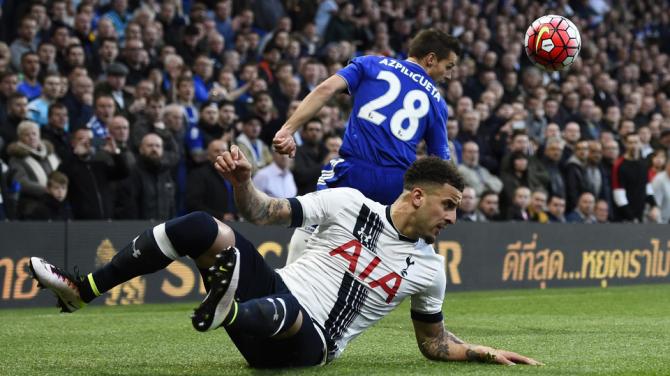 The Premier League easily kept fans on the edge of their seats not knowing what was going to happen next. Chelsea’s defense downfall was just as spectacular as Leicester City’s shocking championship win.

If Leicester’s rise to the top of English soccer is the most bewildering aspect of this chaotic season in the Premier League, then the implosion of Chelsea runs a close second.

A 3-2 loss to Sunderland on Saturday made it official: Chelsea will end the season with the worst title defense in the 24-year history of the Premier League.

The Blues can finish no higher than ninth place and could still drop as low as 11th.

That’s much worse than Manchester United’s seventh-place finish under David Moyes in his woeful 10 months in charge in 2013-14, which is some achievement in itself.

And there’s still one ignominy left in this sorry campaign for Chelsea: On Sunday, the team will give a guard of honor to Leicester manager Claudio Ranieri and his players when the new champions come to Stamford Bridge on the final day of the season.

Ranieri was the coach fired by Chelsea owner Roman Abramovich in 2004 as he chased the signature of Jose Mourinho.

Chelsea started as the runaway champions from the previous season, with a squad to envy and a manager widely regarded as one of the world’s best. It’s turned into an absolute mess.

There’s the Eva Carneiro saga from the opening day of the season that left the club in a bad light and will drag on into June in the courts; the firing of Mourinho in December; the fall from grace of top players like Eden Hazard, Nemanja Matic and sulky striker Diego Costa; relinquishing the league title with barely a whimper; and on Saturday, the sight of long-time captain John Terry trudging to the dressing room after being sent off late against Sunderland in what likely was his 703rd and final match for Chelsea.

The 35-year-old Terry, who has been at Chelsea since he was 14, hasn’t been offered a new deal.

“Captain. Leader. Legend” reads the banner about Terry draped across one of the stands at Stamford Bridge.

“We know what he has done for this club and what he has won,” Matic said of Terry. “All of us in the team wish him all the best for the future and of course, this is not a good way to finish in a club.”

Stamford Bridge is going to be a very different place next season. With Terry set to leave — it’s unclear whether for the United States, China or another English club — the last member of Chelsea’s old guard and spine (Petr Cech, Terry, Frank Lampard, Didier Drogba) disappears. Losing all that experience and winning mentality leaves a massive hole in the team.

There’ll be no Champions League soccer at Chelsea for the first time since the 2002-03 season.

And there’ll be another new manager in situ — current Italy coach Antonio Conte.

Where to start on Conte’s to-do list. Replace Terry; attempt to keep hold of Hazard; decide whether Diego Costa is worth the effort and strengthen the forward line; try to attract players to a club no longer in Europe’s elite; and assess how big a role youngsters like Ruben Loftus-Cheek, Kenedy and Bertrand Traore should have next season.

If Italy reaches the European Championship final on July 10, Conte will have barely a month before the new English season starts. Planning is surely underway already, but he’s still got precious little time to get his feet under the table at the club’s training base at Cobham.

A huge rebuilding job appears necessary at Chelsea but will Conte get the funds from Abramovich to do so? Mourinho didn’t last year, perhaps precipitating his decline. And for Chelsea to get top stars without the lure of the Champions League, it might have to spend extra for players.

With Manchester City, Liverpool and Manchester United also likely to be in the market for world-class players this offseason, Conte will have to be astute and could end up turning to Italian players in the transfer market. And there’s no knowing how that will turn out.

The soap opera that is Chelsea Football Club has always guaranteed drama and headlines in the Abramovich era, but also a regular supply of silverware and European soccer.