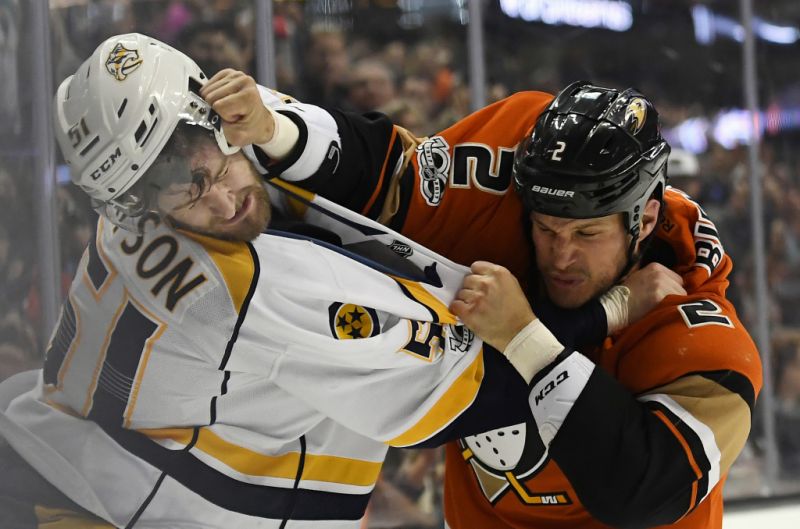 Game One of the Stanley Cup playoffs’ conference finals had both the Nashville Predators and Anaheim Ducks giving up plenty of goal shots and opportunities, but it was a winning strike from James Neal that secured the 3-2 victory in overtime.

A few moments after James Neal crumpled Anaheim’s Brandon Montour with a vicious check, the Nashville forward took a pass from P.K. Subban and ripped a shot past three Ducks for the winning overtime goal. 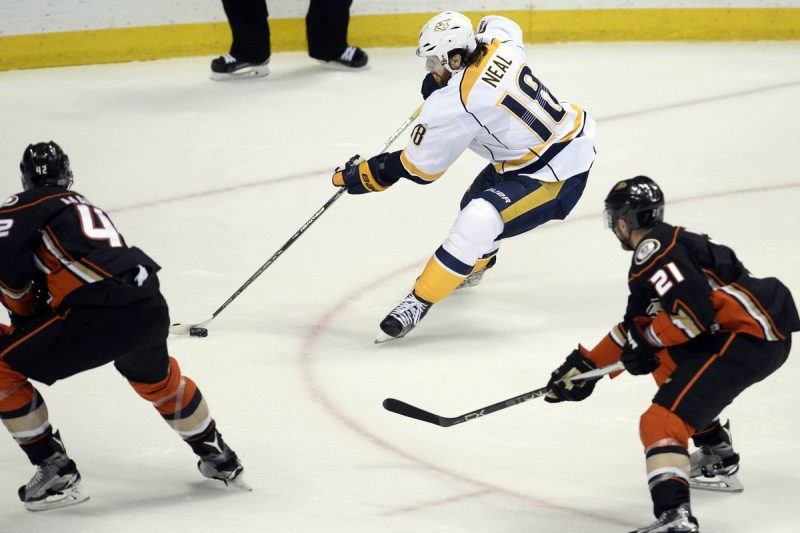 Even in uncharted territory for this franchise, the Predators are still rolling through the Stanley Cup playoffs with their distinct combination of smash and flash.

Neal scored 9:24 into OT, Pekka Rinne made 27 saves, and the Predators kicked off their first appearance in the Western Conference finals with a 3-2 victory over the Anaheim Ducks on Friday night.

Filip Forsberg and Austin Watson scored in regulation for the Predators, who improved to 9-2 in this NHL postseason. They also won their third straight series opener on the road, continuing their month-long run of relentless postseason play.

“It shows a lot of character,” Rinne said. “All night, we had a lot of chances, and we didn’t give them a lot. … I thought that we created a lot, and eventually, we were going to get one by him. I thought (Ducks goalie John) Gibson played a strong game tonight, but guys stuck with it. We’ve been doing that the whole playoffs. It’s a great sign for a team.”

After finishing off St. Louis in the second round last weekend and resting while the Ducks labored through seven games against Edmonton, Nashville capitalized on its fresh legs to win a predictably physical game between two hard-hitting powers.

Nashville got off to a strong start and followed it up with a gritty overtime effort after Hampus Lindholm’s first playoff goal in two years tied it for the Ducks in the third period.

Neal put a long shot past a sprawled Gibson after a prolonged threat by the Predators that left Anaheim’s defense in disarray. The goal was the veteran forward’s third in four games.

“I don’t know if it hit the goalie or the player that was laying in front still,” Neal said. “But it was a good feeling to see it go in.”

Jakob Silfverberg scored on the Ducks’ first shot, and Gibson stopped 43 shots in a stellar performance. Just two days after finishing off the Oilers in the second round, Anaheim struggled to keep up at times in its second conference finals appearance in three years.

“No guy will use that as an excuse,” said center Nate Thompson, who won the faceoff that led to Lindholm’s tying goal. “They came out and took it to us. We just need to get back to playing our game.”

Although this conference final matches two Sun Belt clubs 2,000 miles apart, they have a feisty history. Anaheim and Nashville are meeting in the postseason for the third time, including the past two seasons.

Nashville twice won Game 1 and went on to claim the previous two series with major help from Rinne, who usually has been at his inimitable best when facing the Ducks’ scorers. Rinne picked up right where he left off last season when Nashville eliminated Anaheim from the first round in seven games, but Gibson was similarly outstanding.

“We knew they were going to come hard,” Gibson said. “It was their first game in a while. We weren’t our best, but we lost in overtime. If you look at the first period, they really came on us with a lot of pressure. We haven’t played a team like that in a while. We got better as the game went on.”

The Ducks got just one shot on goal in the first 13 minutes of Game 1, but Silfverberg put it into Rinne’s far top corner for his eighth goal in 12 games this spring, matching his goal total in 48 games over his previous six trips to the postseason.

Nashville dominated the weary Ducks, and Forsberg forced a turnover on a forecheck before tipping Matt Irwin’s shot through Gibson for his fourth goal.

Watson then put the Predators ahead early in the second period with his first playoff goal, banking his shot in off Anaheim defenseman Sami Vatanen.

The Ducks played a strong third period and evened it when Lindholm scored his first playoff goal in 25 games since Game 1 of the 2015 Western Conference finals against Chicago.

NOTES: Anaheim remained without two key injured veterans. D Kevin Bieksa missed his seventh straight game, while F Patrick Eaves missed his fifth straight game with a leg injury. Bieksa is close to returning to health, while general manager Bob Murray said he is hopeful Eaves could play again in the postseason. … Watson became the 15th player to score a goal for Nashville in just 11 playoff games. … A 6 p.m. local start time combined with Southern California’s legendarily bad Friday traffic to leave thousands of empty seats in Honda Center at the opening faceoff. The sellout crowd filled in throughout the night. … The Ducks went scoreless on four power plays. They’re 0 for 21 with the man advantage since late in Game 2 against Edmonton on April 28.