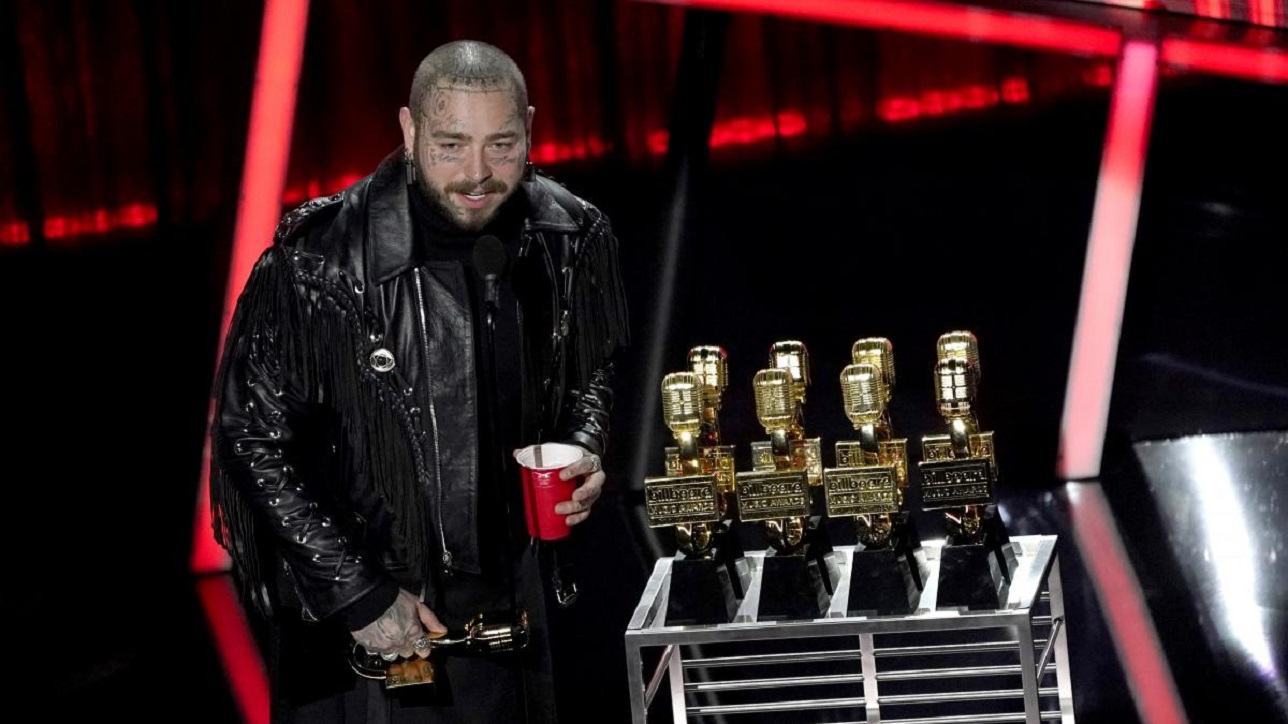 With eight of his winning trophies being delivered on a cart by host Kelly Clarkson, Post Malone knew he was the big winner from the beginning of the night. She did this pandemic style.

“Since I can’t touch you, I had to wheel it out,” she joked.

In what turned into a three-hour ceremony, the show was held at the Dolby Theater in Los Angeles with many artists performing in person without a live audience. Because the show was originally scheduled for April 2020, the delay made some of the winning songs feel rather dated, like Lil Nas X taking four awards home for his big hit single Old Town Road. (It might take a moment to bring that song back to your memory, I know.)

Walking into the show with 16 nominations, the artist won nine honors at the 2020 Billboard Music Awards, where John Legend gave a heartfelt performance that was dedicated to his wife.

With his voice aching as he sang passionately from the piano, Legend told viewers “this is for Chrissy” before singing “Never Break,” which includes the lyrics “we will never break.” The performance comes two weeks after Chrissy Teigen announced she had a miscarriage, explaining in a heart wrenching social media post that she and Legend drove “home from the hospital with no baby.”

“John, that was so beautiful,” host Kelly Clarkson said following his performance. “All my love to you and Chrissy.”

It was one of several performances that were pre-taped for Wednesday’s show. Other musicians attended and performed at the empty Dolby Theatre in Los Angeles during the three-hour event, which aired on NBC.

After announcing that Malone won the show’s biggest honor, top artist, Clarkson wheeled out eight more trophies for the hitmaker.

“I’m honestly blown away by the love everyone’s shown to me,” said Malone, who also won top rap artist, top male artist and top rap album. “It’s kind of big deal to me and everybody involved because we work our (butts) off.”

He beat out Eilish for the top prize, but she was still a winner, taking home top Billboard 200 album, top female artist and top new artist.

Others had similar messages. Khalid, who won five honors, told fans “your voice matters now more than ever.” And Lizzo wore a black dress with “vote” printed across it.

She also gave an encouraging speech, telling viewers to find their voices and don’t change to meet society standards.

“I just want to say I’ve been thinking a lot about suppression and the voices that refused to be suppressed. And I wonder, ‘Would I be standing here right now if it weren’t for the big Black women who refused to have their voices be suppressed?’ And I just want to say right now, if you’re at home watching this and you were thinking about changing yourself to feel worthy, this is your sign to remain true to who you are,” Lizzo said onstage after winning top songs sales artist.

Luke Combs followed with three wins, and after his performance he offered positive words to his fans and the crew working on the Billboard Awards.

“I know that everybody has been through so much this year. I wanna thank the crew that is working on this show tonight because they have gone through some insane stuff to make this happen for you guys. I hope everybody is staying safe there at home,” he said.

Garth Brooks accepted the Icon Award from Cher, who called the country star “a true music legend and my friend.” Brooks, who is the only artist to have nine of his albums sell more than 10 million units each and reach diamond status, performed a medley of his hits.

Clarkson kicked off the show singing Steve Winwood’s “Higher Love,” which became a dance hit last year after Whitney Houston’s cover of the song was remixed by Norwegian DJ-producer Kygo. Clarkson was joined by drummer Sheila E. and a cappella group Pentatonix for the performance of the song, which earned Houston a posthumous nomination for top dance/electronic song. Houston died in 2012.

Guitar rock legend Eddie Van Halen, who died last week, was honored as the show aired a clip of his Billboard Awards performance from 2015. And rapper-activist Killer Mike received the Change Maker Award.

This year’s Billboard Awards were originally supposed to take place in April but were postponed because of the pandemic. It’s the reason why some of the nominees in the 55 categories may feel dated.

For instance, all five nominees for the main song award were nominated for Grammys earlier this year in January. And nominees for top Billboard 200 album included Ariana Grande “Thank U, Next,” released in Oct. 2018, and Taylor Swift’s “Lover,” not her recent release “Folklore.” Some of the nominees were even big contenders at the 2019 MTV Video Music Awards — held more than year ago — including Lil Nas X’s “Old Town Road” and Lizzo’s “Truth Hurts.”

Maroon 5
Panic! At The Disco

Kane Brown “Experiment”
WINNER: Luke Combs “What You See Is What You Get”Maren Morris “Girl”
Thomas Rhett “Center Point Road”
Morgan Wallen “If I Know Me”

The Lumineers “III”
Slipknot “We Are Not Your Kind”
Tame Impala “The Slow Rush”
WINNER: Tool “Fear Inoculum”Vampire Weekend “Father of the Bride”