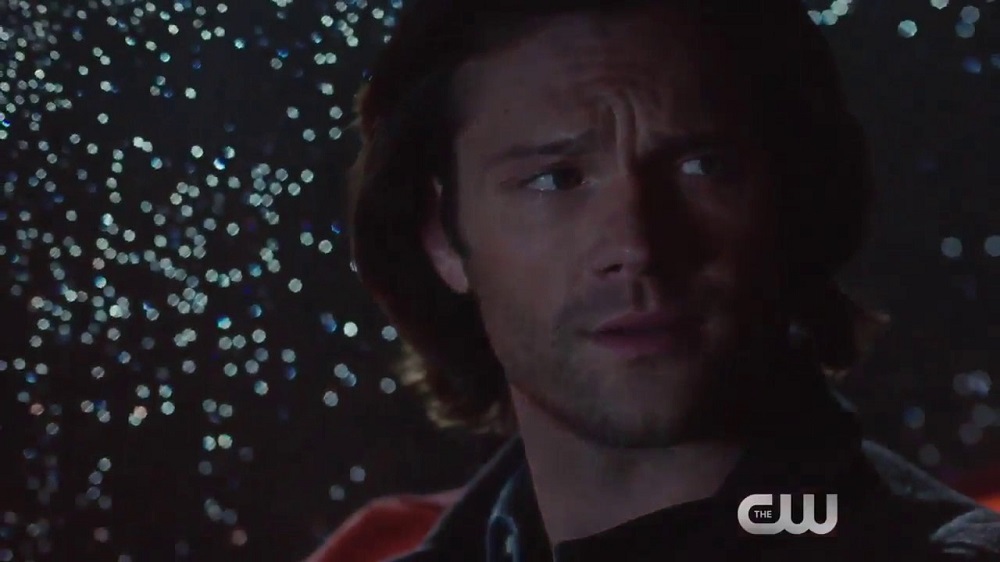 Last week’s Supernatural won’t go down in history as one of my favorites – it was at times downright unpleasant to watch, but that doesn’t mean it wasn’t impactful. Luckily, the difficult to watch scenes were interspersed with some lighter moments that I enjoyed and some excellent acting, which helped. And I just had the opportunity to re-watch after spending the weekend at a Supernatural convention in Nashville, which gave me some different perspectives on the episode.

The opening scene is classic Supernatural – dark, full of foreboding, and scary as hell. I don’t know if it’s just left over from childhood and none of us ever really outgrew it, but fear of the thing hiding in the closet or grabbing us from under the bed is always lurking underneath our adult composure. The opening scene played on all those fears, leaving my heart pounding by the time we transition into Sam and Dean at home in the bunker.

I will never get tired of seeing Sam and Dean in the bunker, so I was happy just to see them researching a case, hunched over Sam’s laptop together like it was Season 1 all over again. My happy place was jolted, however, when the boys called Mary, and she lied to them outright about where she was and what she was doing. I know she’s not the first Winchester to lie, and she undoubtedly won’t be the last, but it rankled anyway. It’s impossible for me to get myself out of her sons’ headspace – they are heartbreakingly vulnerable when it comes to their mother, and it’s very hard to watch her let them down. Her ‘I love you’ made me grimace, which can’t be a good sign. 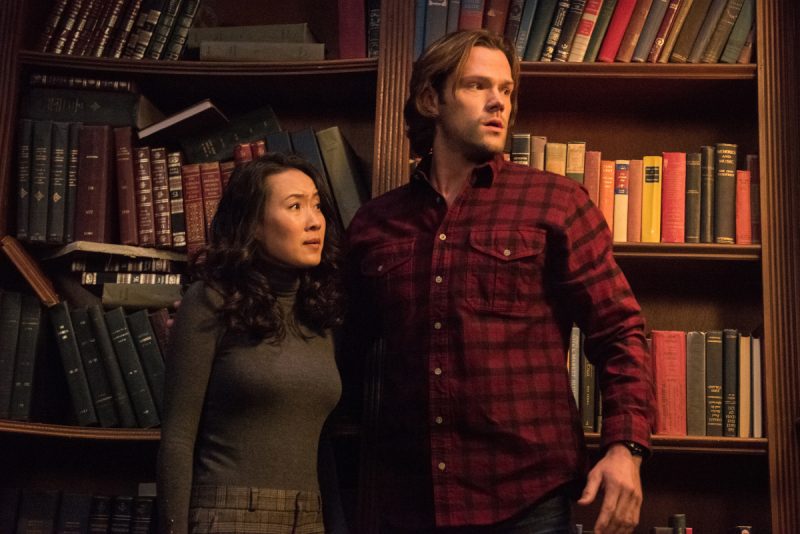 Where are you taking us, Show? And if you decide to send Mary on a redemption arc, as it seems clear you will, are we going to be too far down the road by that time to follow? I worry, I really do.

Dean is clearly not buying Mary’s ‘I just need some R & R,’ telling Sam that he feels like something’s going on with her. Sam, on the other hand, really wants to believe that his mom is okay.

Jared Padalecki is killing me this season with Sam’s subtle but obvious yearning for his mother, his desperate need to believe that she loves them and she’s okay.

The theme of this episode and this season is parenthood, the first incarnation of which is Mary Winchester. We learn more about the BMoL’s Mr. Ketch and his role in her evolution in this episode. He’s smarmy to the max, keeps trying to get Mary to have a drink with him, and uses what seem like classic abuser tactics, trying to get her to cut ties with her family and devote her life just to the BMoL (like him). We also start to gain some insight into Mary’s rationalization for working with them – that Lady Toni was a ‘rogue operative.’ If she has any maternal instinct at all, that would have to be what Mary believes, but it’s still a hard sell. Surely she’s smarter than that?

Mary: Nothing comes before my family.

Mr. K: You might play at being a good mommy… is that just what you want to believe?

Parenthood as a major theme has even made its way into the relationship between Crowley and the captive Lucifer. The two Marks, Sheppard and Pellegrino, are both delicious in their scenes with each other. You get the feeling that poor Crowley is in way over his head, much to Lucifer’s glee. Crowley’s zeal for revenge will perhaps be his blind spot.  Some of those scenes were so heavy on exposition that I complained out loud about it to my television, but I have to admit, I’m grateful to Crowley for putting Lucifer in Mark Pellegrino’s meatsuit for perpetuity!  Lucifer asking for advice as a father-to-be from Crowley on finding out he’s a dad was priceless. 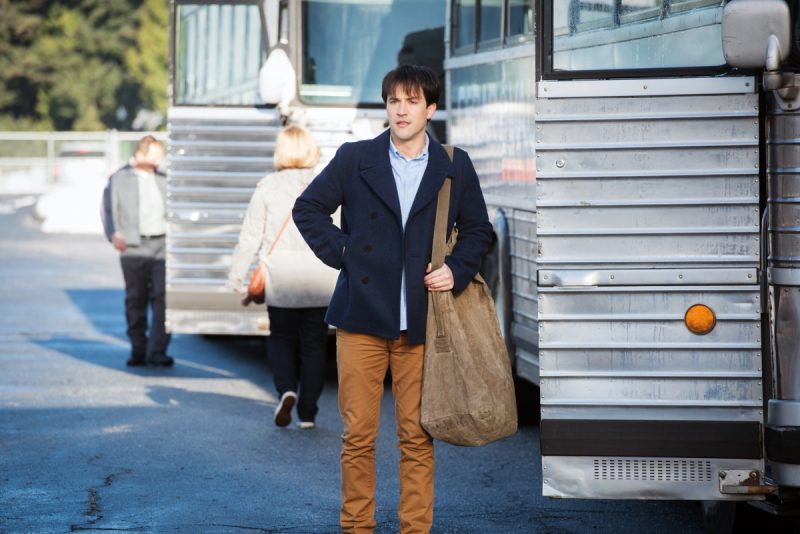 The third parenthood story in the episode is Rowena’s, mother of Crowley and grandmother of Gavin. It was a treat to have Theo Devaney back as Gavin. I liked him when he was introduced and was glad they spared him at the end of that episode. Anything that brings out the humanity in Crowley, I am all for. Devaney plays Gavin with a sweetness and innocence that makes you wonder who Fergus would have been had his life circumstances not been so tragic – or who Rowena would have been, for that matter.

Dean and Sam convince Rowena to help them in exchange for ‘something you’ll like’ – after Sam convinces her to “sit down” and listen to them in a voice that brooks no argument and made more than one fan have to go get a cold drink. 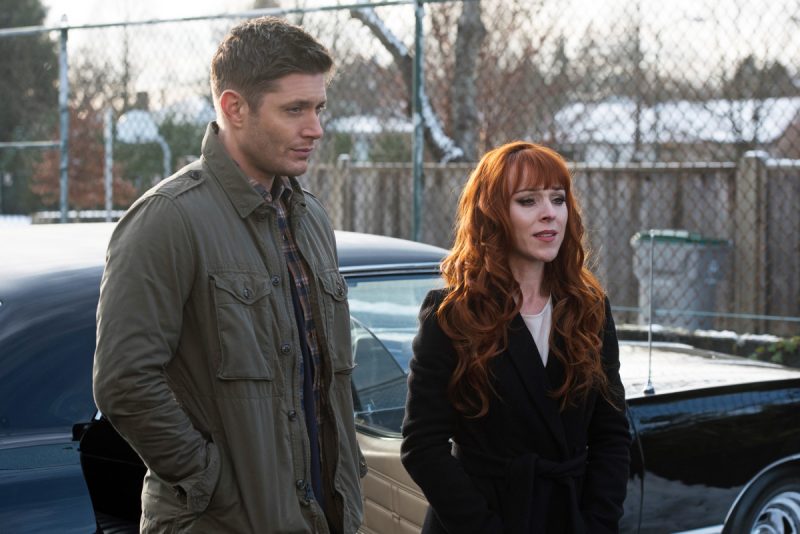 I get all tingly when you take control like that, Sammy.

Anyway. I enjoyed having Theo back, and I loved finding out that Gavin was indeed a good man who was willing to do the right thing. I think Rowena enjoyed him too and was fond of him in her own way. She may even have meant it when she insisted that Fergus let him go, that he wasn’t like them. But the look on Crowley’s face when she held him back and Gavin said I’m sorry and goodbye to his father just about broke my heart. Damn you, Mark Sheppard! Those were tears in his eyes! Even Sam and Dean seemed genuinely moved by Gavin’s willing sacrifice, and I might have reached for a tissue during that scene. 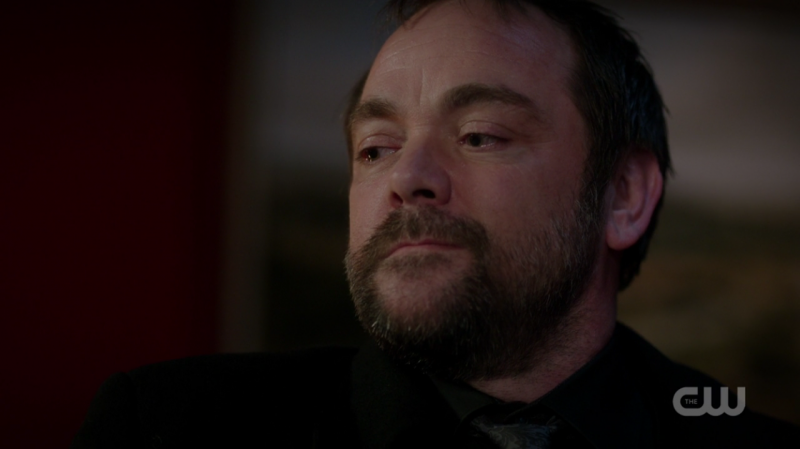 (Though I wanted to quibble with the blaming of teachers in this episode. Why didn’t Fiona go after sailors, since they were the ones who terrorized her? Did it really make any sense for her to just randomly go after all teachers??  I suppose this might be the professor in me taking it personally though).

The fourth parenthood thread in this episode is that of Kelly and her unborn Nephilim child. As Ramiel hinted at, his sister Dagon has indeed taken an interest – she saves Kelly from angels trying to kill her and convinces her that she’ll be safer with Dagon. Her speech is an interesting one, telling her that no one is born good or bad, and that it’s not all black and white – a repeated theme on Supernatural. Where Dagon (or Ramiel, for that matter) actually fall on that continuum remains to be seen. 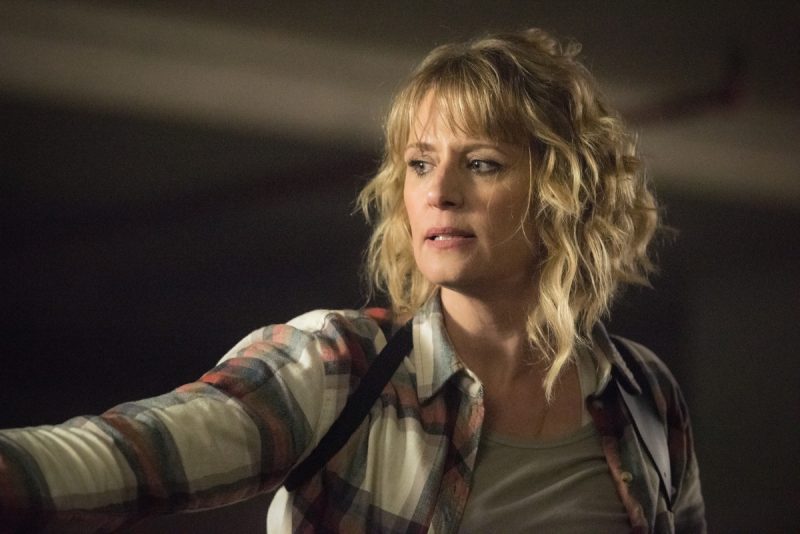 The last few scenes – also focused entirely on parenthood – were difficult to watch. Mary, perhaps pushed a bit too far by Mr. Ketch, returns to the bunker with a peace offering of burgers and beer.

Dean: It’s been a long, long…long long while.

Sam: He’s dramatic, we missed you.

Mary fesses up to working with the BMoL, and the gobsmacked looks on her sons’ faces tells us just what they think about that. Sam points out the obvious.

Sam: For lots of reasons….broken ribs and burnt feet…we don’t trust them.

Mary to Dean: Don’t give me that face.

Jensen Ackles can say entire pages of dialogue with a face, and he’s doing that in this scene. No way are either of the brothers buying what Mary is trying to sell them. We end with her reminding them that they’re family, which at this point feels like rubbing salt in the wound to me and asking them to hear her out. 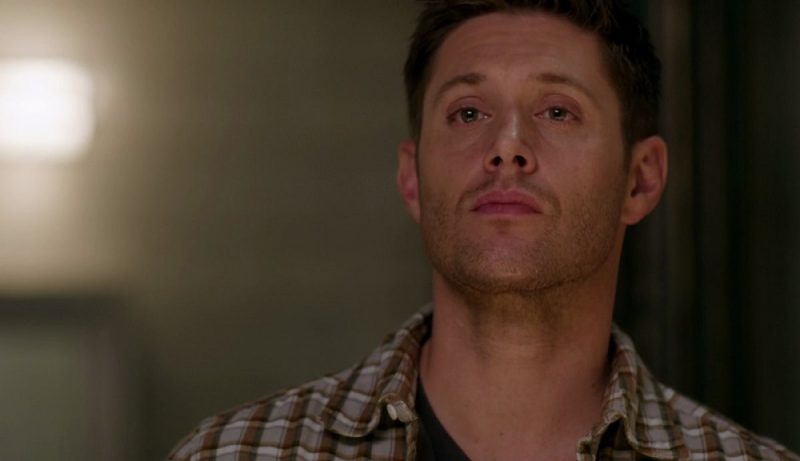 At this weekend’s convention, Samantha Smith tried to reassure a fandom which for the most part does not like Mary Winchester one bit that she would start proving herself to us and that we would eventually like her again. In Samantha’s view, Mary is aligning herself with the team most likely to rid the world of monsters once and for all – and she does consider Lady Toni to be a rogue operative.  I just hope Show knows how far it can push its audience in terms of not liking a character and still be able to pull everyone back from that end of the continuum. Emotional whiplash isn’t pleasant. I’m trying to keep an open mind, but right now I’m finding it hard to believe that we’re going to be easily convinced to go along for the ride with Mary’s redemption. 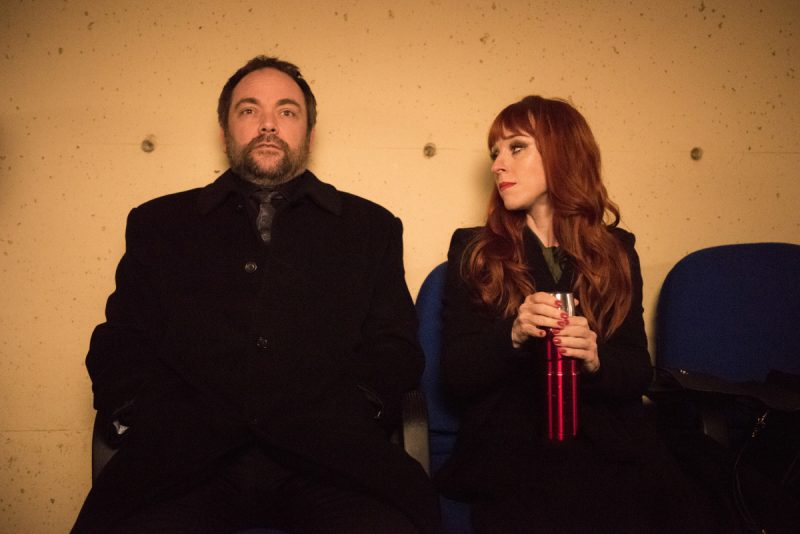 That scene was hard enough to watch, but the one that came after, for me was even harder. Crowley confronts Rowena on a bus station bench. The setting is bleak, dark, fitting.

Crowley: I know there’s an ugly reason you did what you did.

I don’t want that to be true, but Rowena confirms it. She knows that Fergus cared for his son, just as she cared for Oscar, the boy who she loved long after she couldn’t love her own son. The boy who Crowley, in his own grief and anger, made her kill. Now she gets to watch him suffer as his son dies.

Rowena: I’m your mother, dear. Who better to crush your shriveled heart? 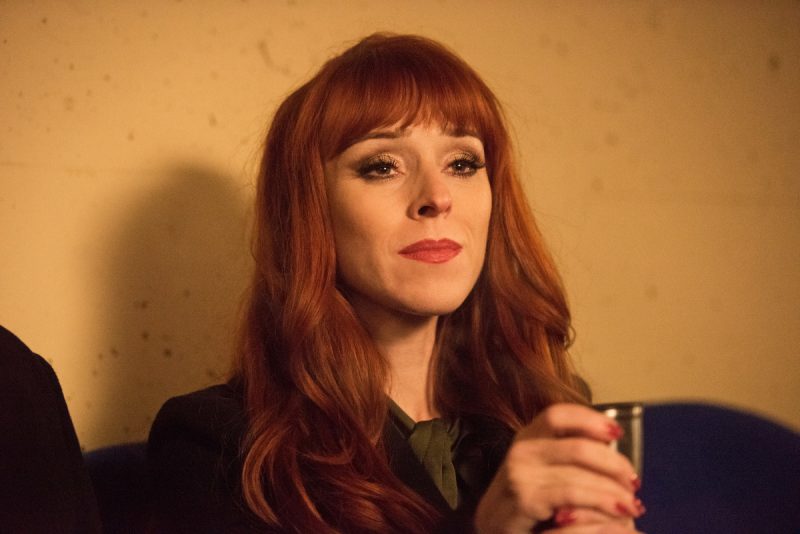 I have to admit; I hated that scene. And yet, I recognize it as unbelievably well done. Crowley – Fergus – and Rowena, two broken broken people, full of emotions they repress and refuse to acknowledge, projecting it again and again onto others and hurting everyone, themselves most of all. It’s truly tragic, and Ruth Connell and Mark Sheppard make us believe every minute of it. Ouch.

Rowena’s line almost seemed prophetic, after watching Mary tell her sons that she’s been lying to them. No one can hurt you like your parent.  Perhaps prophetic also is Gavin, out of place and time and feeling like he’ll never fit in there – the obvious similarity to Mary’s situation is clear. Is this a foreshadowing of what’s to come? 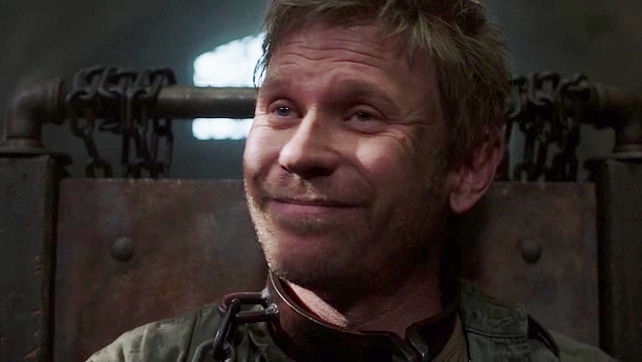 The Rolling Stones are a perfect soundtrack to the ending montage – “so don’t play with me, cause you’re playing with fire”. Dagon and Kelly, Mary and the BMoL, Crowley and Rowena, Crowley and Lucifer – it’s relevant to all.  Does this show know how to use music or what?

There were a few more tidbits that I enjoyed in this episode, so I’ll end with those to cheer myself up a bit. A) Boys in fed suits. B) Dean getting distracted by a dagger in the Shipwreck Museum and then fumbling it back onto its stand, then glancing over at Sam across the room to find him staring with bitchface number two. C) Vancouver in the snow! And finally, D). Smart!Dean figuring out that vessel was the one that Gavin was on. Love me some Smart!Dean.

Check out this week’s Supernatural 1214 The Raid trailer above.