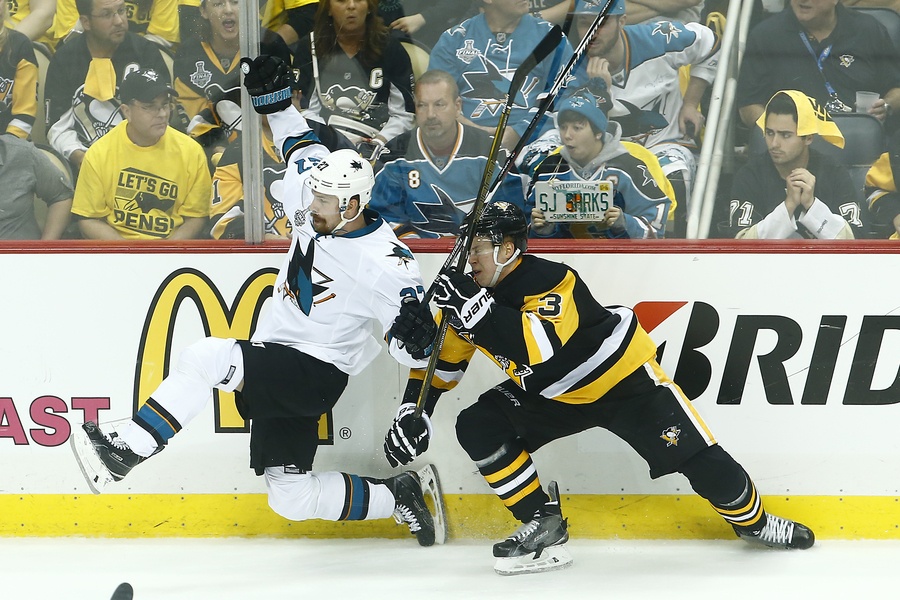 The Pittsburgh Penguins, following action on Monday night, are now just one game away from winning the 2016 Stanley Cup. Game 4 of the championship series was played in San Jose, and it saw the Pens post a 3-1 victory to take the lead in the finals by the same margin. Pittsburgh will now return home for a game on June 9th, one that could end the 2016 post-season.

Game 4 saw a reversal of a trend that had characterized the first three games of the series: the two teams were more-or-less balanced in terms of shots on net on Monday. In the previous three games, the Penguins had outshot San Jose drastically, including in Game 3 which the Sharks won. However, on Monday night, San Jose managed 24 shots while Pittsburgh only got 20 through to Martin Jones.

Curbing Pittsburgh’s blitz was definitely one key to Game 4. However, the Sharks weren’t able to post a solid winning enough save percentage despite the low shot count as Martin Jones was just .850 between the pipes (17/20). Meanwhile, Matt Murray, at the Pens’ side of the rink, posted a .958 save percentage for the Penguins and further added to his growing reputation as a playoff performer.

For skaters, Pittsburgh’s Evgeni Malkin had been called upon to turn in a big game following the Game-3 loss. He responded with what would be the eventual game-winner, scoring on the power play early in the second period on assists from Phil Kessel and Kris Letang. Coach Mike Sullivan commented on Malkin after the game.

On the other bench, a first-time trip to the Stanley Cup Finals is looking like it could be short and not-so-sweet. San Jose are facing the prospect of having to win on the road in Game 5 to give their home fans one more game in Game 6 this season. Even if they get to game six and win it, the Sharks would be looking at a road Game 7.

“There’s no quit in our group,” coach Peter DeBoer said. “We’ve been the best road team in the League. We’re going to show up and try to get this back here for Game 6. Until you win four, this isn’t over.”

Game 5 goes on Thursday night at 8 pm ET, giving two off days on Tuesday and Wednesday. It will be the Pens’ first chance to claim a Stanley Cup since 2009, one that would be their fourth overall in franchise history.