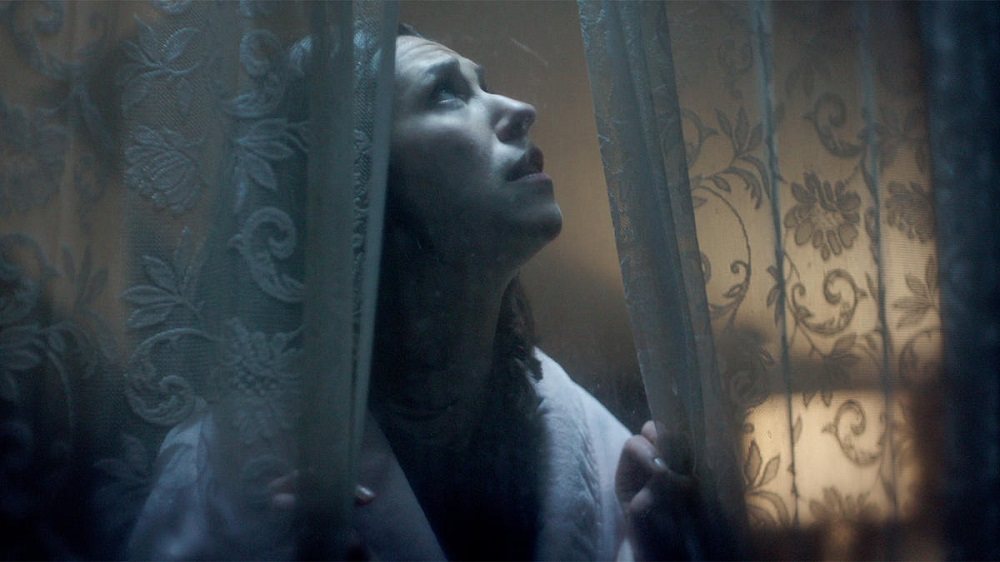 One of my favorite shows, “Paranormal Witness,” is back on SyFy, and it never fails to creep me out. The fifth season kicks off with Voodoo Preacher and teaches us the valuable lesson that if you move into a house with lots of blue paint symbols and a duct tape sealed attic door, keep things as they are.

Back in 2012, Jenny was working as a journalist in Auburn, Alabama when her husband Hunter’s new job prompted a move to the rural town or Rockford. Jenny was set to become a stay-at-home mom as she, Hunter, their young daughter Grayson and dog Betty-Lou made the trek to their new home with everyone excited for a fresh start.

From the outside, their idyllic (and rather isolated) country house looked like a dream come true, but once they entered it became clear why it was such a bargain. It looked like the previous tenants left in a hurry, as the place was in shambles … and most of the second floor was covered with what appeared to be a haphazard blue paint job. What an ugly mess! Who would do such a thing? 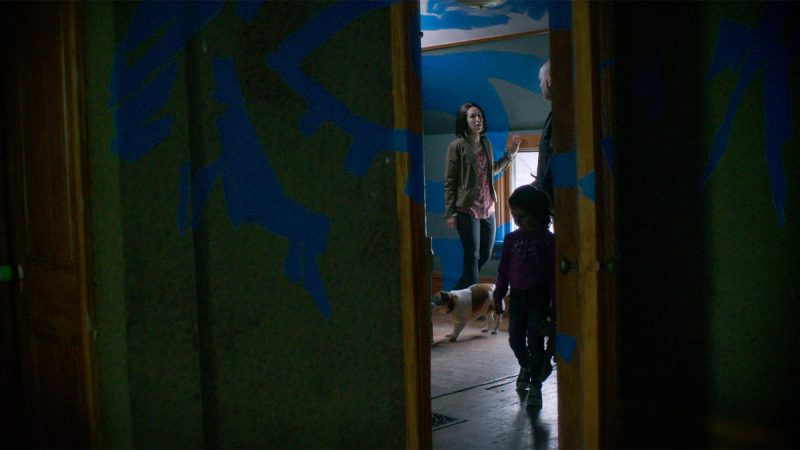 The mystery deepens — and gets more ominous — as they find that the mirror is missing from the bathroom … in fact, there are no mirrors anywhere in the house. And why has the entry to the attic been duct-taped shut? Jenny removes the tape and peeks into the attic, which is in an even worse state than the rest of the house.

Wait a minute … are those … eyes coming from the attic, looking after Jenny?

Soon after moving in, Hunter begins his new job, leaving Jenny and Grayson home alone in the house during the day. The house has an intercom system that plays music in almost every room, which comforts Jenny and makes her feel more secure. That night, though, as Hunter was working late and Grayson was asleep, Jenny felt something was watching her. As she didn’t want to go to bed alone, she tried to get Betty-Lou to go upstairs with her, but the dog refused, agitated and nervous.

In her bedroom, Jenny hears a scurrying sound outside her window. She investigates but finds nothing, and notices that, whatever it is, it didn’t activate the motion sensor lights that encircle the house. Jenny locked the window nonetheless, not wanting some strange animal jumping into the bedroom in the middle of the night.

As Jenny returns to bed, the scurrying sounds commence again … and … is that a demonic face in the window, looking in on Jenny?

The next morning, Jenny tells Hunter about the noises. He checks the motion sensors to make sure they’re working, though he’s convinced his wife is just having a little trouble adjusting to country living and imagining things.

Jenny starts devoting her time to fixing up the house, especially since they’re about to have company: Buddy, her nine-year-old son from a previous marriage, and Faith, Hunter’s nine-year-old daughter from his own previous marriage. When the kids arrive, the family sits down to a meal, with Hunter feeling like quite the proud papa: new house, good job, family all together … what more could a man ask for?

The sense of good cheer is short-lived, though, as both visiting kids experience quite a scare later that night. When preparing for his bath, Buddy becomes mesmerized by the new mirror in the bathroom and is soon shocked by a demonic image that appears, and Faith’s room becomes infested with a swarm of cockroaches!

After Buddy and Faith’s visit comes to an end, Jenny starts feeling deflated and upset by these strange and increasingly aggressive happenings. A few days later, she experiences another scare as the music over the intercom stops … and is replaced with death metal at a deafening volume. Unable to turn off the unbearable noise, Jenny calls Hunter at work, who tells her to tear the wires of the intercom out of the wall. Jenny does so and it works. Blissful silence! 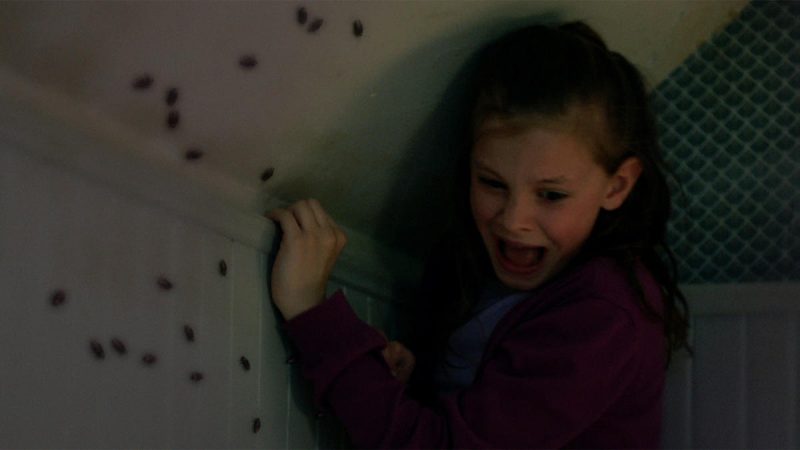 Not for long, though. Soon, Jenny hears a creaking noise coming from upstairs … footsteps that are too heavy to be Grayson’s. Jenny grabs a large knitting needle and ascends the stairs, tracing the noise to Faith’s guest bedroom. Jenny pulls back the curtain of the closet, stabbing wildly … but there’s nothing there. It is then that Jenny becomes convinced that her house is haunted with a presence that does not want her family there.

Hunter isn’t convinced, though, insisting that it’s an old house, and old houses make noises. Jenny is enraged, feeling like she’s dealing with this alone. “I gave up everything for you!” she screams at her husband, which is like a knife in the heart for Hunter.

Jenny needs to talk to someone who will believe her, so she seeks counsel with her old friend, Kim. When Kim comes to visit, she immediately feels uncomfortable, even out in the front yard … where she sees a shadowy figure move across the upstairs window of the house. Inside, Jenny shows Kim some photos of the house from before Jenny fixed it up. Kim recognizes the haphazard upstairs paint job as being Haint Blue, a color used in voodoo to ward off evil spirits. From there, Jenny tells her about the insects, the footsteps, the mirror … as Kim is a historical researcher, maybe the two of them can get to the bottom of this together.

Hunter would soon thereafter become a true believer himself after coming home from work late one night. The girls asleep, he turns on the television to unwind … only to suddenly hear his wife calling his name, as if she were right behind him. Confused, he goes upstairs to find Jenny asleep, and when he wakes her to ask if she called for him, she only expresses annoyance at being risen from her slumber. When Hunter returns to the living room, he catches an ominous shape moving out of the corner of his eye … and a figure reflected in the glass of the television! Hunter investigates but finds nothing, though now he’s starting to believe his wife about the house being haunted. 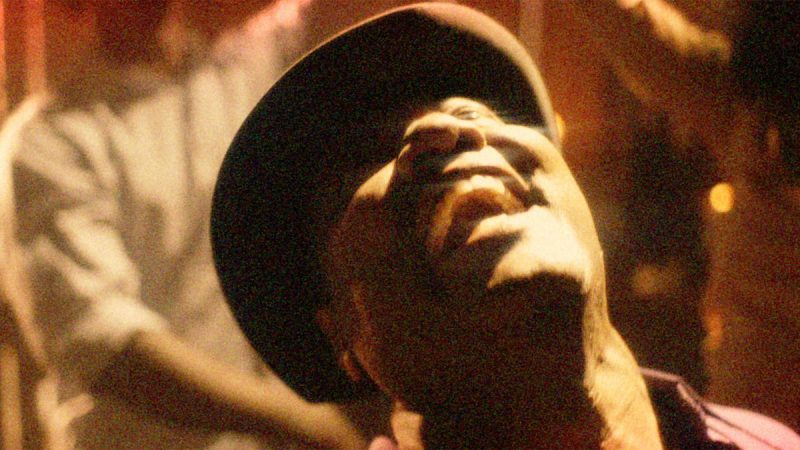 Jenny and Kim venture to the Noosa County Courthouse to do some research on the house, where they find that it was once owned by the Maxwell family. Some follow-up Internet research reveals the notorious figure of William ‘Willie’ Maxwell, a local preacher who was connected to some mysterious deaths in the 1970s. All five victims were members of Willie’s family … and he received sizable insurance payments for each one. At the fifth and final funeral, Willie was shot dead by the victim’s uncle.

It’s quite a story, one even author Harper Lee was investigating as the basis for a potential true crime novel. And it gets even juicier upon the revelation that locals often referred to Reverend William Maxwell as ‘the Voodoo Preacher.’

Later that day, the disturbances in the house took a violent turn as Jenny was pushed from the top of the stairs. Bruised but not broken, she managed to turn around to face her attacker — and saw an entity drop from the attic! When Hunter comes home that night, he finds Jenny crying on the couch. He assures her that as soon as the lease is up, they’re out of there.

Even though they’ll be gone in four weeks (which is, really, four weeks too many), Jenny wants some answers. She does some research on voodoo and discovers that mirrors are considered to be a doorway to the dead and that insect infestations are common voodoo curses. The real showstopper, though, is her finding out about the Boo Hag, an evil spirit that will sit on your chest as you lay in bed and steal your life energy before retreating to the attic. 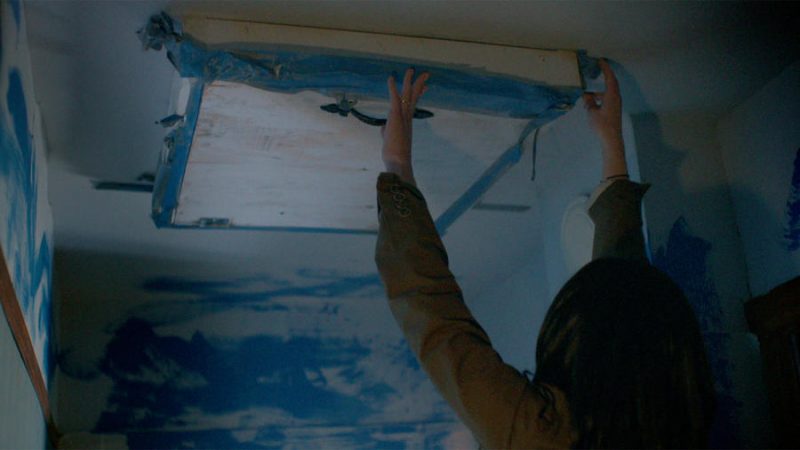 Wait a minute … did Jenny release the Boo Hag when she removed the duct tape from the entryway of her attic?

From there, Jenny’s research gets more gruesome as she comes across photos of bloody voodoo sacrifices … right around the time Hunter finds Betty-Lou out in the yard, savagely ripped open and her heart removed. Was their poor dog killed as a voodoo sacrifice by some unknown force?

That night, Hunter and Grayson were both asleep when Jenny settled into bed and once again heard the scurrying noises. In the darkness, she saw a gruesome shape manifesting: the Boo Hag! The creature pounced on her, draining her of her life force. Jenny was paralyzed and sure this was the moment of her death until she heard the demon’s voice in her head: “I’m going after your daughter.” 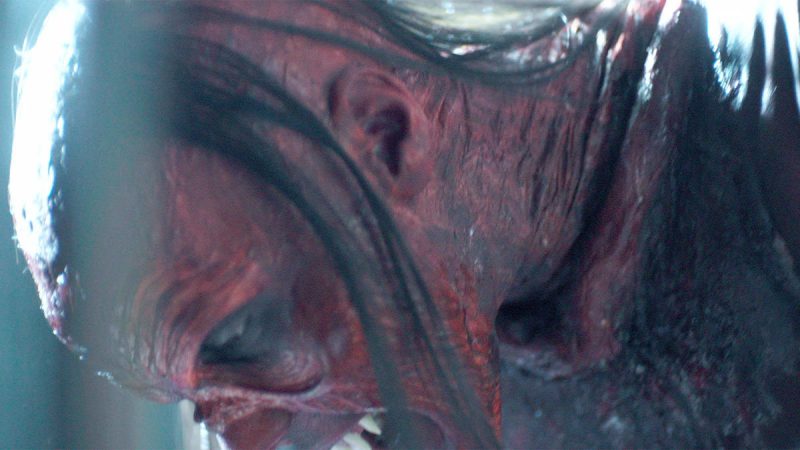 The Boo Hag ran off and Jenny followed in hot pursuit. She found Grayson screaming with claw marks on her neck … but the creature itself was gone, having possibly retreated back to the attic to prepare for its next bit of terrible mischief.

Jenny, Hunter and Grayson left the house the next morning, never to return.