On the second episode of Orange is the New Black “Power Suit,” the overcrowding is getting to the inmates. The bathrooms are packed, forcing Maria to brush “her teeth in the kitchen. Aleida still tries to console Daya after losing her baby to the system. She reassures her that her boyfriend Cesar will continue to take care of the child after he’s out of jail. The only thing is he’s not getting out anytime soon. He has conspiracy charges against him and he assaulted two police officers. That means Daya’s child is going to be in the system for a while.

The crowded bunks are also contributing to the tension. Piper still “bullies” Hapakuka and Red is irritated by Dwight’s, her new bunk buddy, snoring. Black Cindy shows more hostility to Abdullah after picking an argument with her over space. Things really blow up when she mentions she is Jewish, and Abdullah replies, “You ain’t no Jew.”

In the chapel, Caputo officially introduces Piscatella as the new captain of the guards. In an attempt to remedy the overcrowding issue, Caputo implements some changes. He announces the addition of porta-potties outside and earplugs to drown out noises. Needleless to say, the ladies are not feeling it.

One of the many topics OITNB touches on this season is colorism and race. It does so specifically with the Hispanic population at Litchfield. Blanca points out to Maria that the majority of new inmates are Dominican, making them the majority and that brings us to flashbacks about Maria’s childhood. We see her father holding a machete as he gives a speech to a group of Dominican me, encouraging them to start a drug war with the Mexican Cartel. He then brings out little Maria, letting her know that what he does is for her as they celebrate her birthday. He’s a proud Dominican to the extent of being prejudice. He believes Dominicans should take care of their own and stick together. Back to present day, Blanca and the Dominican girls then take over the TV room watching a soccer game and running two white inmates out. Maria confronts Blanca, and they argue about national pride. Maria doesn’t see any difference among the Latina inmates while Blanca feels differently.

The next flashback shows a teenaged Maria coming home from school with her friend. Her father is in the living room discussing the war with the Mexicans with two other Dominican men. They go into her bedroom, and Maria tells her friend how tired she is of her father’s “national pride.” In her view, he’s a hypocrite. While talking, they witness a young Mexican guy that she has a crush on running from the police outside her window. Maria sees him toss a bag of drugs in a bush. She goes outside, finds the drugs and tosses them into her bedroom window while the police search him. 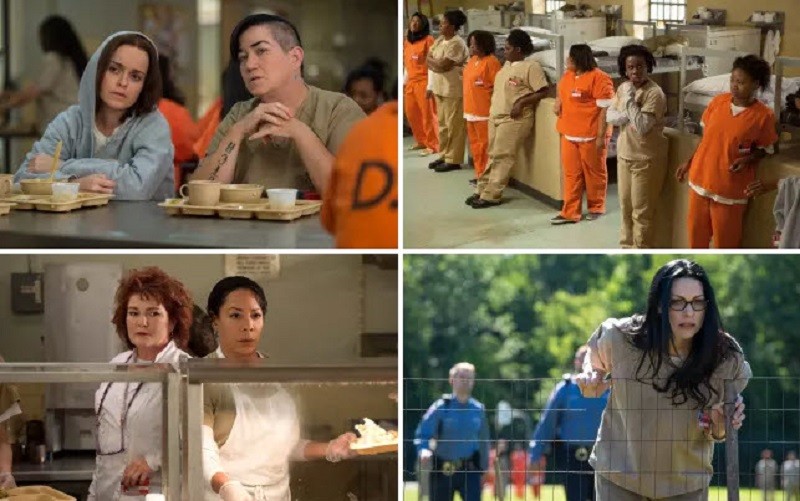 Later, she pays him a visit at a boxing gym and gives him the drugs. Of course, she likes him, so she flirts her way into actual alone time. When Maria’s father confronts her about her relationship with a Mexican man, she says she doesn’t want to be Dominican anymore. By the way, Mexican is Yadriel, the father of the baby she had in season one. Her dad kicks her out of the house, and we see why Maria is hesitant about the Dominicans uniting in Litchfield.

Caputo continues to give Judy preferential treatment. He moves her to a “private room.” He also finds the ideal roommate for her in Yoga Jones, who meets Judy’s requests for no “fatties, Nebraskans or anyone with too much hair.” Yoga is uncomfortable with living so much better than the other prisoners.

At the MCC board meeting, Caputo expresses the overcrowding issues and the fact that Litchfield is understaffed. The board does not want to let go of the prisoners and lose the money that the federal government is paying to house them. So they decide to hire vets; mostly because they get significant tax credits for doing so. Caputo makes the suggestion to offer free housing as a bonus by utilizing the abandoned cabins in the woods. Here, we are seeing the evolution of Caputo this season. He’s becoming a new man, a company man. This is confirmed when he buys a $1,100 business suit.

Officer Coates tries to strike up a conversation with Pennsatucky as if he never raped her. She keeps her answers short and gets away from him as soon as possible. Later in the cafeteria, while sitting with Boo, they observe Maritza, the new van driver, to determine if Coates is now raping her. When Pennsatucky tries to talk to Maritza later in code to confirm her suspicions, Maritza doesn’t know what she’s talking about. On the other side of the cafeteria, Lorna continues to annoy the other inmates by bragging about her new marriage. She goes on and on to Alex, who obviously has Ayden’s murder on her mind. In the kitchen, Daya complains about all of the Dominicans and all of the trays she has to clean. When Blanca confronts her, Maria tries to calm the situation but to no avail. As far as Daya and Aleida are concerned, Blanca and her crew are “dumb-in-a-can.” Later, when Blanca is pushed down the steps by the two white inmates she drove out of the TV room, this inspires Maria to unite the Dominicans. They get revenge on them, beating them up. Poussey and Soso see the two women bruised up later and flirt while discussing it. It looks like the two have a budding romance blooming.

One popular character who we have not seen yet is Sophia. She was put in the SHU for her own safety, according to Caputo, last season after falling victim to trans-phobia from other inmates. Sophia’s wife, Crystal, finds out what’s going on thanks to Gloria’s son, and comes to the prison to confront Caputo. He tells her Sophia became violent, which Crystal knows is bull shit. He brushes her off because he has bigger fish to fry at the moment, but that doesn’t mean she’s going to back down.

Black Cindy and Abdullah continue to bicker about space, especially since Cindy moved the girl’s stuff. As she puts it, she “went there, bought and house, moved in and is remodeling the kitchen.” That night, Dwight’s horrible snoring continues to keep Red awake and nothing the cook does helps. The next morning, Piper wakes up to Hapakuka doing leg presses with her bunk (Piper has the top bed). Obviously, the “badass” doesn’t intimidate her at all. Later, in the cafeteria, she approaches Hapakuka with a business proposition. She offers her the role of bodyguard.

Oh, Piper certainly will need protecting later in the season.