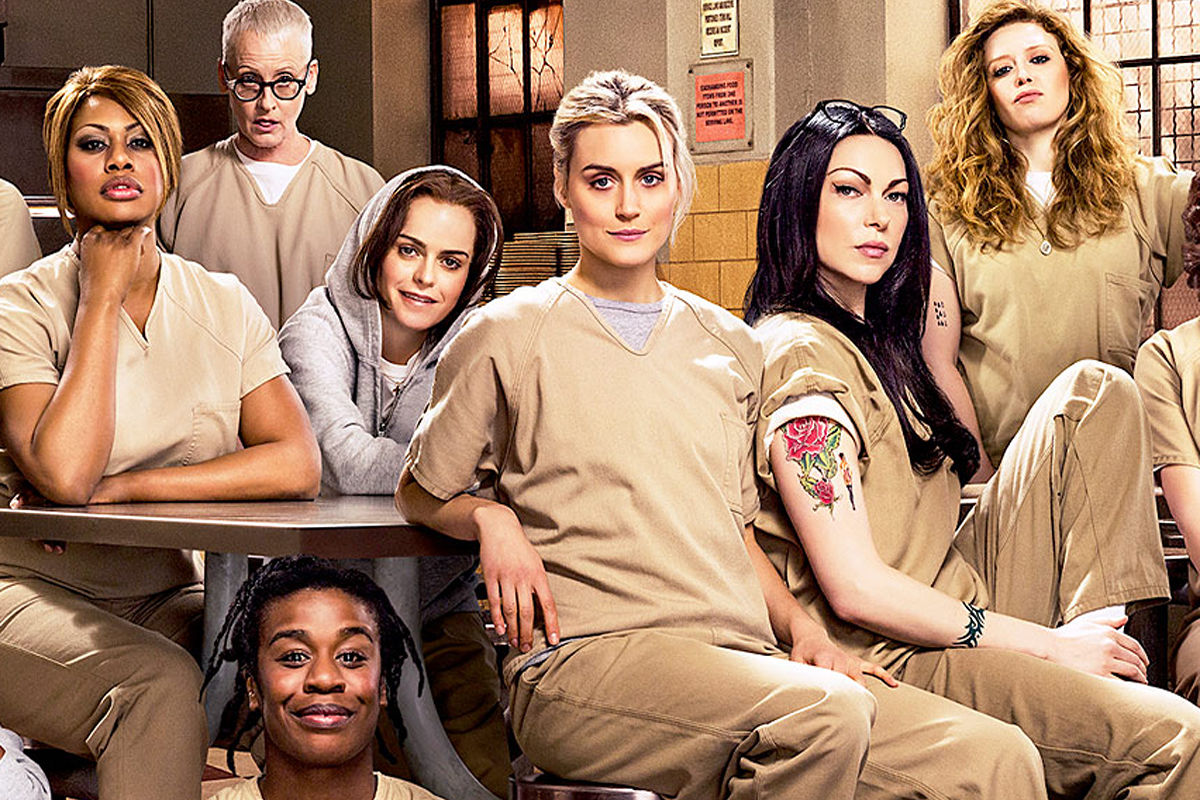 It’s finally here. Orange is the New Black season four first episode “Work that Body For Me.” Most of us have been waiting eagerly for its much-anticipated return and let’s just say it is as intense as ever.

The season picks right back up where it left off last season. The guards have walked off the job, and the inmates enjoy a brief moment of freedom in the lake. “Gerber” Bayley runs to Caputo’s office to tell him what’s going while he’s on the phone requesting help to handle the situation. Meanwhile, what’s left of the bumbling Litchfield guards looks more like a gang of stooges than correctional officers, as they suit up in riot gear to handle the security breach. As they march into combat, the maximum-security prison’s riot squad pulls up on the scene. They leap out of the back, locked and loaded, looking like true badasses.

In the greenhouse, Lolly walks in on Aydin (guard/hitman) strangling Alex and springs into action. And by springs into action, I mean she stomps his face into the ground. Alex then finds a cell phone in his boot with a message from Kubra asking if he killed her yet. Wanting to be done with Kubra, she texts back confirming that she’s dead (good move). But he is no fool. He requests a picture, so they give him a picture. Alex lays on the ground pretending to be dead, and Lolly snaps the evidence. Kubra, the disgusting bastard that he is, then requests a picture of her tits. Men. As they hear the call for inmates to return to their cells, the two inmates place Aydin in a corner, covering him with a tarp and a flower pot, with intentions of taking care of him later. 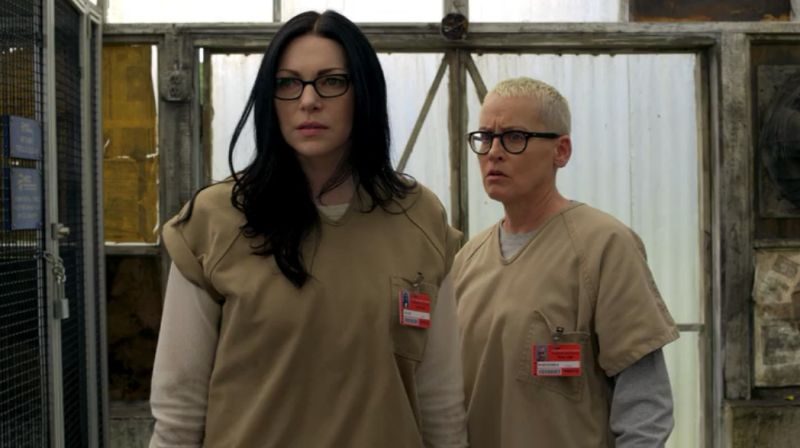 Meanwhile, Crazy Eyes and Maureen wander in the woods, away from the swimming inmates. Maureen suggests that they make a run for it and Crazy Eyes, though reluctant, goes along, but only for a moment. When they find a cabin in the woods, Maureen suggests that they live there in a kind of fantasy world, like a gingerbread house. It all ends up being a little TOO crazy for Suzanne. She leaves her high and dry in the woods, because who really wants to eat raccoon meat for the rest of their lives? On her way back to the prison, she runs into Caputo while he’s doing a perimeter sweep of the outer fence looking for straggling inmates. Suzanne begs him to let her back in and spills the beans on Maureen’s whereabouts. As he looks for Maureen, we find out that the cabin used to be guard quarters. After finding her, Caputo just sends her to the bunks. He’s just too tired to deal with her. 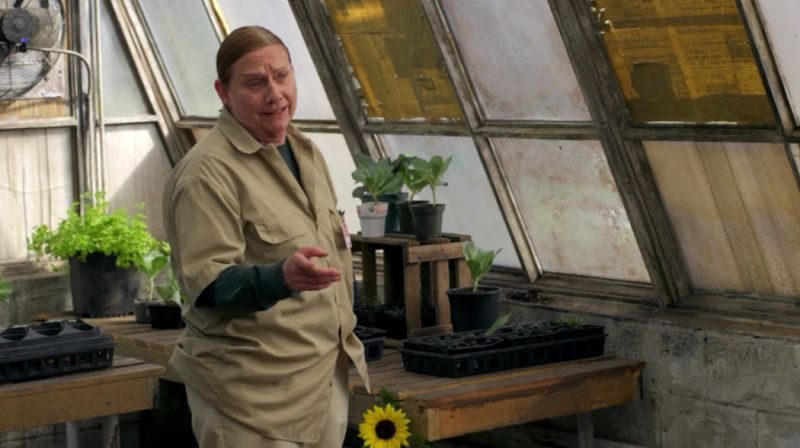 Back in the jail, it’s pure chaos in the cafeteria. The addition of new inmates has caused issues for the seasoned ones. Here’s a little of what’s going on. Red is blocked by Piscatella, a guard from a male maximum security facility who serves as the main protagonist this season. Daya mourns the taking of her baby from Cesar after his arrest. Aleida tries to comfort her and finds that she’s bleeding through her pants. Aleida and Gloria both confront Charlie Coates (the correctional officer who raped Doggett last season) for help. Coates takes Lorna’s toilet paper veil off her head (she’s still high off of her wedding) and uses it to absorb the blood temporarily. 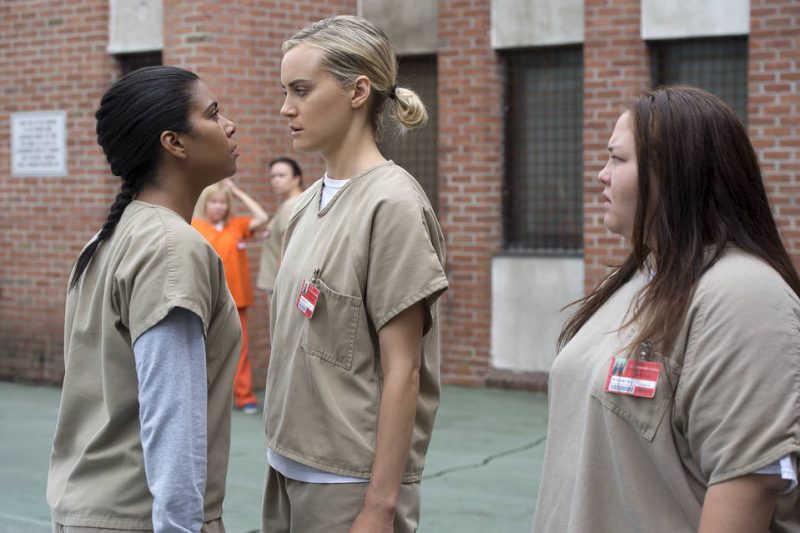 Before I go on, I have to say that Piper is definitely my least favorite character. Still basking in her newly established “gangster” persona, she is all bark and no bite. Sooner or later, people realize that, and it gets pretty bad for her. I mean, the girl just boasts about it to everyone, but people like Red keep her in her place.

In the midst of the chaos, Luschek is sent to change the printer cartridge and print out inmate lists for the head count. As he does so, he farts into a box of cookies and writes Caputo’s name on it. The whole time Judy King, a cooking celebrity turned inmate and her boyfriend watch him. The boyfriend is appalled at the chaos in the prison, but Judy is content to wait it out. She sends him home to tell her husband all is well and remains in the office with Luschek. Caputo receives a call telling him that she’s has been processed and is in the prison. Of course, being the Martha Steward/ Paula Dean character, Judy is also to receive special treatment because she has friends. He yells on the walkie-talkie looking for her and Luschek replies that she’s with him while the two have a frank conversation about sex. 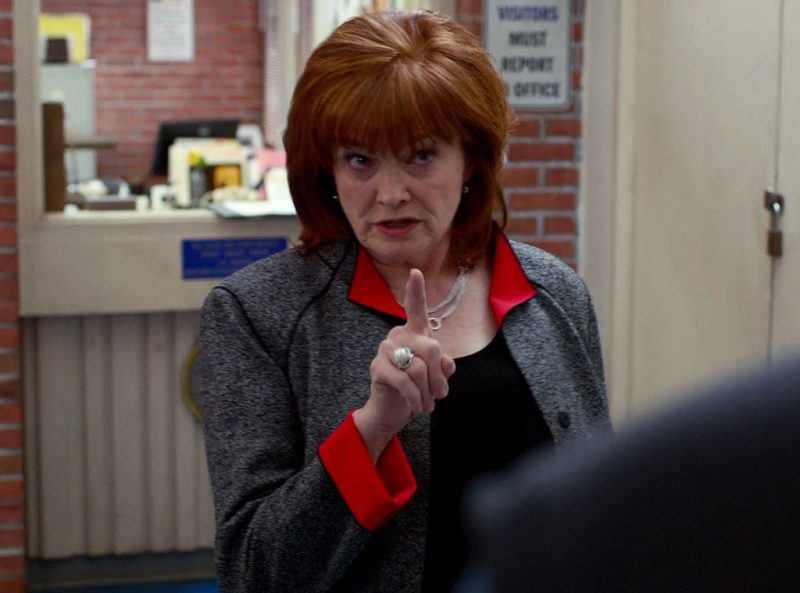 Finally, as the chaos dies down, the new inmates receive their bunk assignments. Red and Piper now share their bunk with Stephanie Hapakuka, a young, overweight Hawaiian inmate. Piper immediately attempts to bully Hapakuka, but Red intercedes. Alison Abdullah, a Muslim inmate, is assigned to bunk with Black Cindy, who greets her with a dirty look. Just as Judy is assigned to bunk with star struck Poussey, the celebrity chef is removed and given a private room.

In the end, Alex sneaks out to bury Aydin after trying to wake up Lolly to help her. She goes to the greenhouse alone and to her horror, Aydin still alive, barely breathing. He is paralyzed and unable to speak, so she does what anyone in her shoes would do- suffocates him. The next morning Lolly wakes her up to deal with some “non-gardening related matter” in the greenhouse. When they arrive, they find Frieda staring at the dead guard. Now part of the conspiracy, she helps them dismember the corpse and hide it in the garden.

Talk about a skill you can take right to the bank.