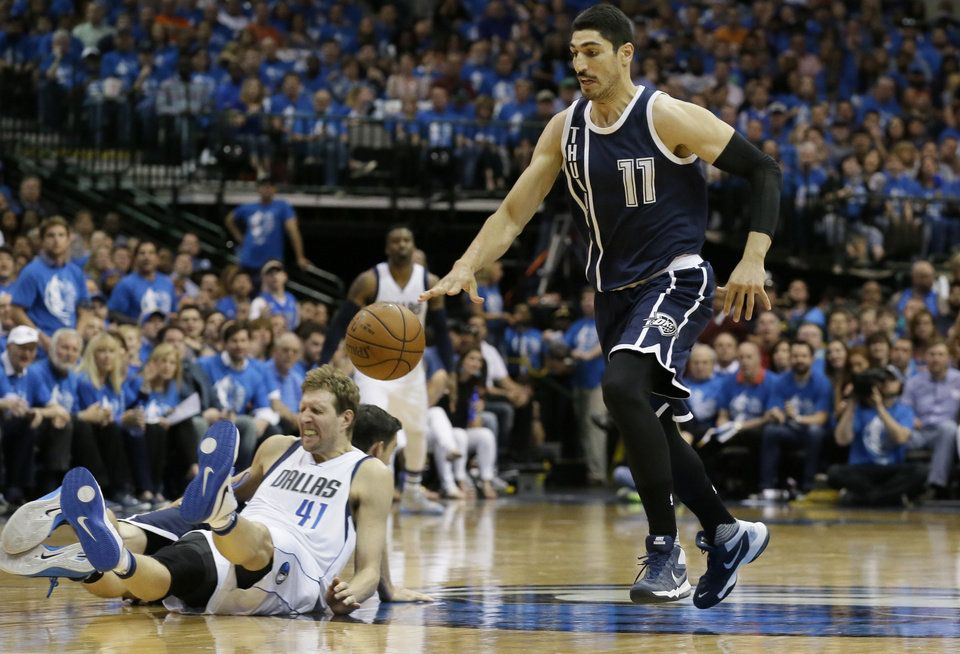 The #3 seeded Oklahoma City Thunder roared over the Dallas Mavericks 119-108, giving them a commanding 3-1 lead in a Series First Round that definitely proved frustrating for some. Russell Westbrook led his team with 25 points, and 15 assists and Enes Kanter chipped in with 28 points in 25 minutes.

Russell Westbrook had 25 points and 15 assists and the Oklahoma City Thunder beat the Dallas Mavericks 119-108 on Saturday night, taking a commanding 3-1 lead in a testy first-round series that got quite a bit testier.

Enes Kanter had his second straight playoff career high with 28 points on 12-of-13 shooting for the Thunder, who never trailed in two games in Dallas after the Mavericks evened the series with a one-point win in Oklahoma City following a 38-point loss in the opener.

Kevin Durant scored 19 points before he was ejected in the final minute for a flagrant foul on Dallas’ Justin Anderson. It was the last of several tense moments, and Dallas team security had to make sure Durant didn’t leave the court in front of the Mavericks bench.

Dirk Nowitzki had 27 points and eight rebounds for the Mavericks, who haven’t won a playoff series since winning the 2011 NBA title.

After Dallas coach Rick Carlisle called out Durant while complaining during the off day over what he essentially said were dirty plays by the Thunder in Game 3, the teams had a confrontation in front of the Oklahoma City bench early in the second quarter.

Data curated by PointAfter
That flare-up started when Anthony Morrow, who was sitting on the bench, refused to give the ball to Salah Mejri after the Thunder threw it out of bounds.

Dallas guard J.J. Barea confronted Morrow, a former Maverick who then shoved Barea. Westbrook and Mejri ended up nose-to-nose in a shouting match before all the players were separated by coaches and officials.

Westbrook and Mejri got double technicals, and the Thunder were called for delay of game.

In the second half, Westbrook appeared to shout an expletive toward the fans after getting tangled up with Mejri on a drive. Mejri, who left the game in the fourth quarter with a right hip injury, was called for a foul.

And then came the foul on Durant, whose swung his arm and hit Anderson in the head when the Dallas guard was driving along the baseline with 50 seconds remaining. Just 30 seconds later, Serge Ibaka got a technical for throwing an elbow at Charlie Villanueva.

The NBA apparently agreed with Carlisle’s assessment that Durant threw an elbow at Mejri in Game 3, giving the Oklahoma City star a technical after the fact. Carlisle said there were three other “non-basketball physical escalations that were initiated by them.”

Thunder coach Billy Donovan steadfastly refused to get drawn in to the debate.

Mavericks point guard Deron Williams tried to return in his continuing battle with a sports hernia that kept him out of Game 3. He lasted all of 89 seconds, limping to the locker room with 10:31 remaining.

Williams aggravated what is being called a left abdominal strain while chasing a loose ball and running into the scorer’s table just 40 seconds into the game.

Barea played despite a right groin strain that kept him out of Game 2 and will limit him as long as the series lasts. He had his worst game, going scoreless on 0-of-7 shooting.

The Mavericks stayed close in the second half but never got the deficit inside seven points. Westbrook had 12 points and five assists in the third quarter, nd Kanter dominated around the basket to the help keep a comfortable lead.