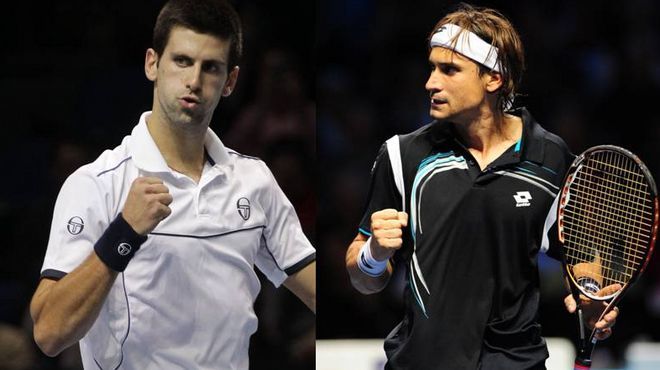 Novak Djokovic has torn through the 2015 Miami Open Masters pretty quickly and easily, but he did meet a very tough match with Alexandr Dolgopolov. That match showed he may be the number one worldwide ranked tennis player, but there’s still plenty of competition ready to take his place. On Thursday, he takes on David Ferrer, who’s been having a much better than average year, but he’s only won five of the eighteen games against Djokovic.  This will be one match to watch as it could be a long one.

Kei Nishikori will take on John Isner in the quarterfinals also. Isner knocked out Milos Raonic yesterday, and is also looking primed for a great match.

Below, you can check out today’s schedule of matches.

Djokovic won the PNB Paribas last month in Indian Wells and the World No 1 is now looking for his second consecutive ATP success, this time in Miami. He is just three wins away from winning the ongoing competition.

The Serbian has won the Miami Open on four occasions overall and three out of them have come in the last four years. He is the defending champion and is on the course to win it for the fifth time this year.

Djokovic defeated Alexandr Dolgopolov in the fourth round to seal a berth in the last eight. The 27-year-old was forced to come from behind to win the match 6-7, 7-5, 6-0. So far, he has already dropped two sets and will be looking for a straight set victory on Thursday.

Meanwhile, Ferrer defeated Gilles Simon in straight sets 7-6, 6-0 to make it to the quarter finals. So far, the Spaniard has not dropped a set and he will be keen to continue his impressive performance in the Miami Open when he takes on Djokovic.

Djokovic has faced Ferrer once in the Miami Open in the 2012 and the Serbian won the clash in straight sets.

•    THURSDAY PREVIEW: The top half of the draw features on Day 9 of the Miami Open presented by Itaú as three of the world’s Top 10 players –Novak Djokovic, Kei Nishikori, David Ferrer – and American No. 1 John Isnervie for a spot in Friday’s semi-finals. Djokovic and Ferrer, who first clashed 11 years ago in Romania, meet for the 19th time with the Serb leading their FedEx H2H series 13-5. Nishikori and Isner face off for the first time.

•    FERRER AT THE MASTERS: At the last 11 ATP Masters 1000 tournaments he has contested, Ferrer has reached the QF-or-better nine times. The Spaniard is enjoying a decorated year, opening the season with a 22-2 record and three titles in Doha (d. Berdych), Rio de Janeiro (d. Fognini) and Acapulco (d. Nishikori). His wins in Brazil and Mexico saw him become the first player since Ivan Lendl in 1985 to win back-to-back tournaments on two different surfaces. If he is to reach his fourth Miami SF today, he will need to end a seven-match losing streak vs. Djokovic.

•    CARRYING THE FLAG: Isner is bidding to become the first American to reach the Miami Open SF since Mardy Fish in 2011 (l. to Djokovic). The last home player to win the tournament was Andy Roddick in 2010. Isner’s win over Milos Raonic in the 4R was his first over a Top 10 opponent since Cincinnati 2013, when he reeled off three consecutive wins over No. 10 Raonic, No. 1 Djokovic and No. 7 Del Potro before falling to Nadal in the final. The World No. 24 has a perfect 5-0 record in ATP Masters 1000 QFs.

•    CRUISE CONTROL: Nishikori has dropped just 10 games en route to the QF, breaking serve in 15 of his 23 return games (65%). The World No. 5 is aiming to reach a fifth ATP Masters 1000 SF and a second in a row in Florida. His best performance at this tournament level was a runner-up showing in Madrid last year (ret. vs. Nadal).

•    Nishikori cruised past David Goffin 6-1, 6-2 to reach his sixth ATP Masters 1000 QF. He saw off Mikhail Youzhny 6-2, 6-1 and Viktor Troicki 6-2, 6-2 in his opening two matches.
•    Nishikori has dropped just 10 games this tournament, breaking serve 15 times in 23 return games.
•    Nishikori returns to Miami for the sixth time. He reached the SF last year for the first time with wins over world No. 4 David Ferrer and No. 5 Roger Federer, but was forced to withdraw ahead of his clash with Novak Djokovicdue to a groin injury.
•    Nishikori is bidding to reach his fifth ATP Masters 1000 SF (4-1 record in QFs at this level).
•    At Indian Wells, Nishikori fell in straight sets to Feliciano Lopez in the round of 16.
•    Nishikori advanced to the QF or better at his first four tournaments this year, winning an eighth career title in Memphis (d. Anderson) and reaching the final in Acapulco (l. to Ferrer), the SF in Brisbane (l. to Raonic 7-6 in the 3rd) and the QF at the Australian Open (l. to Wawrinka).
•    Ahead of Indian Wells, Nishikori defeated Vasek Pospisil and Milos Raonicin Davis Cup in Vancouver but couldn’t prevent Japan falling 3-2 to Canada in the World Group 1R.
•    Nishikori rose to a career-high No. 4 in the Emirates ATP Rankings on March 2. He is the highest-ranked Asian player in ATP history. He has since dropped back down to No. 5.
•    In 2014, Nishikori ended the season at a year-end best No. 5 after registering a career-high 54 wins. His year was highlighted by four titles and maiden final appearances at Grand Slam and ATP Masters 1000 level (US Open and Madrid).
•    Isner fired down 25 aces and saved three BPs in a 6-7(3), 7-6(6), 7-6(5) victory over No. 5 seed Milos Raonic. The pair spent two hours and 43 minutes on court, making it the fifth longest match of the tournament. The American overcame No. 9 seed Grigor Dimitrov 7-6(2), 6-2 in the 3R – the 250th win of his career – and junior world No. 1 Andrey Rublev 6-3, 6-4 in his opening match.
•    Isner is yet to have his serve broken this tournament, fending off five BPs in 38 service game. He is four for five on BP opportunities of his own.
•    Isner is the first American man to reach the QF here since Mardy Fish in 2012 (l. to Monaco). Fish is also the last American to advance to the SF in Miami, doing so in 2011 (l. to Djokovic). The last home player to win the tournament was Andy Roddick in 2010.
•    Isner is making his eighth appearance in Miami and this is his first visit to the QF. Prior to this year, he had reached the 4R twice, in 2011 (l. to Anderson) and 2014 (l. to Berdych).
•    Isner is contesting his sixth ATP Masters 1000 QF and first since reaching the SF at Indian Wells last year (l. to Djokovic). He is 5-0 in QFs at this tournament level.
•    Isner now has a 15-35 record against Top 10 opposition.
•    Isner arrived in Florida off the back of a 4R loss to Novak Djokovic at Indian Wells.
•    Isner went into Indian Wells on a four-match losing streak having fallen in the Memphis QF (l. to Querrey), the 1R at Delray Beach (l. to Matosevic) and in both his singles rubbers at Davis Cup (l. to Ward 15-13 in the 5th, Murray).
•    Isner ended 2014 as the top-ranked American for the third straight season, finishing in the Top 20 for the fifth year in a row. He won two titles in Auckland (d. Lu) and Atlanta (d. Sela).

•    Djokovic recovered from a set and 3-0 down to beat Alexandr Dolgopolov6-7(3), 7-5, 6-0 and reach his sixth Miami QF. The Serb defeated qualifierMartin Klizan 6-0, 5-7, 6-1 and Steve Darcis 6-0, 7-5 in his opening two matches.
•    Djokovic is back at the Miami Open for the 10th time. He is a four-time champion, winning the title in 2007 (d. Canas), 2011 (d. Nadal), 2012 (d. Murray) and 2014 (d. Nadal). He finished runner-up in 2009 (l. to Murray). The Serb’s last loss in Miami came against Tommy Haas in the 4R in 2013.
•    Djokovic is bidding to reach his 45th ATP Masters 1000 SF (44-12 in QFs) and his sixth SF in Miami (5-0 in QFs). On the five previous occasions he has reached the QF here, he has gone on to reach the final each time.
•    Djokovic is chasing a 22nd ATP Masters 1000 title this week. He is third in all-time titles won at this tournament level, behind Rafael Nadal (27) andRoger Federer (23).
•    Djokovic clinched a fourth Indian Wells title last Sunday, bringing his career haul to 21 ATP Masters 1000 crowns and 50 titles overall. He became the 11th player in the Open Era to win 50 titles, surpassing Rod Laver and coach Boris Becker, who both finished their careers on 49.
•    Earlier this month, Djokovic helped Serbia reach the Davis Cup World Group QF with victory over Croatia. He beat Mate Delic before teaming up with Nenad Zimonjic to clinch the doubles points.
•    In January, Djokovic became the first man in the Open Era to win fiveAustralian Open titles, defeating Murray in the final. It was his eighth Grand Slam crown, putting him level with Agassi, Connors, Lendl, Perry and Rosewall in eighth place on the all-time list for most major titles.
•    Djokovic also reached the Dubai final in February (l. to Federer in final).
•    This is Djokovic’s 140th week at world No. 1. He is now just one week from tying Nadal for the sixth-most weeks at the summit of the Emirates ATP Rankings (since Aug 23, 1973). Federer leads the way with 302 weeks spent at the top.
•    In 2014, Djokovic finished the season at No. 1 for the third time in four years, winning an ATP World Tour-high seven titles in eight finals. His season was highlighted by capturing a second Wimbledon crown, four ATP Masters 1000 titles and the Barclays ATP World Tour Finals in London.
•    Ferrer finished strong to see off Gilles Simon 7-6(5), 6-0 in the 4R. The Spaniard overcame Lukas Rosol 6-4, 7-5 after sweeping past Federico Delbonis 6-1, 6-1 in his opening match.
•    Ferrer is making his 13th appearance at the Miami Open. He has reached the SF-or-better three times here, with his best showing a runner-up finish in 2013 (l. to Murray).
•    Ferrer has now reached the QF-or-better on nine of his last 11 ATP Masters 1000 outings.
•    Ferrer is bidding to reach his 16th ATP World Tour Masters 1000 SF.
•    Ferrer has won three titles this year, bringing his career haul to 24. He captured the Doha title in the opening week of the season (d. Berdych), before posting back-to-back tournament wins at the ATP 500 events in Rio de Janeiro (d. Fognini) and Acapulco (d. Nishikori). He became the first player since Ivan Lendl in 1985 to win back-to-back tournaments on two different surfaces.
•    Ferrer suffered a 3R loss to Bernard Tomic at Indian Wells.
•    In 2014, Ferrer finished in the Top 10 for the fifth year in a row and sixth overall, reaching the QF or better 17 times, while clinching a lone title in Buenos Aires (d. Fognini).