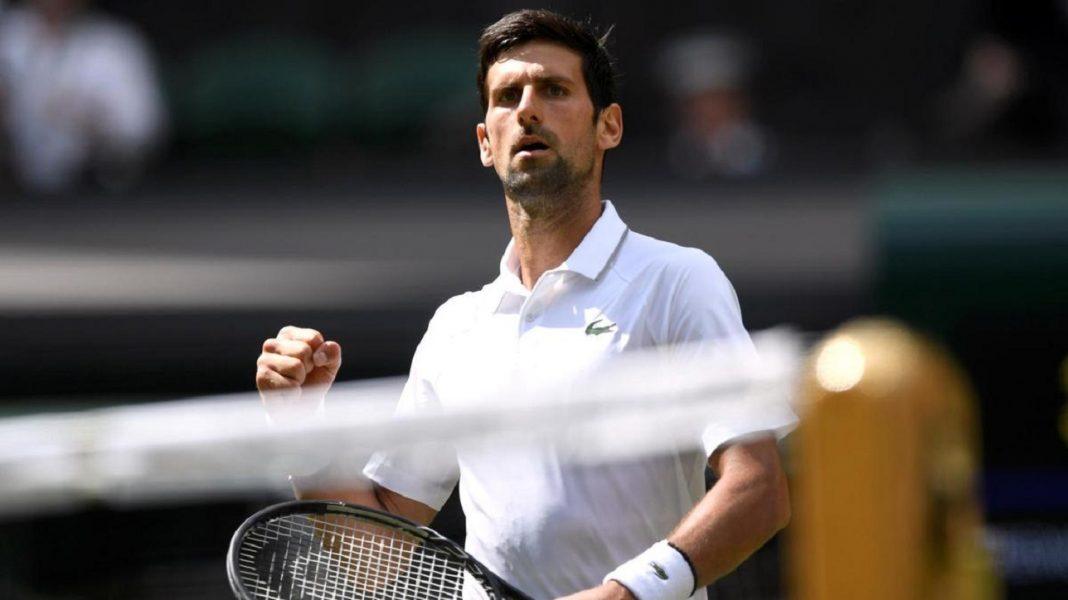 One year ago, tennis champion Novak Djokovic was in an entirely different physical and mental space, but 2019 Wimbledon is a much different story. He is riding high and has already won his way into the second round.

Djokovic is hunting his fifth Wimbledon title this year and he got his 2019 campaign off to a bright start with a 6-3, 7-5, 6-3 victory over Philipp Kohlschreiber this afternoon.

The Serbian is the defending champion at the All England Club and has been drawn in the opposite half to rivals Federer and Rafael Nadal.

Upon reflection of his success, Djokovic pointed to his 2014 final victory over Federer, which he won in a thrilling five-set clash.

It set the Serbian up to win a third Wimbledon title the year after.

And he is hoping to follow suit in defending his grass-court crown this campaign.

“I guess the first time is always very special,” Djokovic said reminiscing on his 2011 triumph.

“Every time I won here, I had that positive change in my career. It seemed like the win in 2014 was exactly what I needed.

“Last year’s win, as well, to kind of turn things around, get that confidence, prove that I can win slams again.

“Between 2011 and ’14, again, I was winning Australian Open, but the other events I wasn’t winning, the other Slams.

“That was a big win against Roger in five sets. Then next year again against him in the finals.

“I mean, it’s hard to describe it. There’s always extra importance approaching this event compared to any other for me.

“Probably for many other players, this is the tournament I think a lot of players dream of playing.”

Djokovic also discussed the benefits of defending a title at the All England Club.

“Well, obviously it is a great honour,” he added.

“Greatest honour probably in our sport, you know, to play as defending champion on untouched grass. I’ve been privileged enough to have that experience several times in my career here in Wimbledon.

“Every time I step on the court, I reflect on what has happened the previous year, especially if you come as the defending champion. I did kind of go through the feelings, rewind those memories, the last Championship point against Anderson last year in the finals.”

What A Difference A Year Makes

A year ago, Novak Djokovic arrived at Wimbledon in a rut.

Still working his way back from elbow surgery, still fine-tuning a new service motion, he was more than 24 months removed from his most recent Grand Slam title. His ranking had tumbled out of the top 20 for the first time in over a decade.

One fortnight later, Djokovic was all the way back to his best. When he enjoys the defending male singles champion’s honor of being the first to play at Centre Court on Monday, facing unseeded Philipp Kohlschreiber, Djokovic will be ranked No. 1 and beginning his bid for a fifth title at the All England Club.

He’ll also be seeking a 16th major championship overall, and fourth in the past five Slam tournaments.

“Quite a difference,” Djokovic said. “Coming off from the surgery, being unable to have a consistency with the results, this was a huge springboard for me, the win at Wimbledon last year. That’s what kind of gave me that push — and also a huge relief.”

“One Grand Slam,” he said, “can definitely change anyone’s career in a few weeks. Even after winning 15 Slams, I still value these tournaments very much and understand the importance they have, importance of winning them on my entire career, my confidence, my future.”

After defeating Kevin Anderson in the Wimbledon final last July, Djokovic beat Juan Martin del Potro in the U.S. Open final in September and Rafael Nadal in the Australian Open final in January.

He wound up running his Grand Slam winning streak to 26 matches before losing a five-set tussle against Dominic Thiem at the French Open in early June.

So now it’s time to start a new run. Djokovic does not hide the fact that he would love to catch the only two men with more major trophies: Roger Federer with 20, and Nadal with 18.

At 32, Djokovic is the youngest member of the Big Three that has ruled tennis for the past 15-plus years; Federer is 37, Nadal 33. They have won 53 of the last 64 Grand Slam titles, including 10 in a row.

They also have won Wimbledon in 14 of the past 16 years; Andy Murray was the champion the other two times in that span.

“Funny enough, you always think somebody takes away something from the other. Probably we have. At the same time, we also pushed each other to greater heights,” Federer said. “We definitely became better because of one another.”

He is seeded No. 2, and Nadal is No. 3, and they could meet in the semifinals. They’re on the opposite side of the draw from Djokovic, so they play their first-rounders Tuesday.

Others in Day 1 action include Venus Williams, at 39 the oldest woman in the draw, against Coco Gauff, at 15 the youngest; two-time major champion Naomi Osaka against Yulia Putintseva; Anderson against Pierre-Hugues Herbert; and 18-year-old Felix Auger-Aliassime, who is seeded 21st, against 2014 Wimbledon doubles champion Vasek Pospisil in an all-Canadian matchup.

While Federer has won a men’s-record eight Wimbledon titles and owns the best grass-court winning percentage in the Open era at .874, Djokovic is building an impressive resume at the place.

The Serb has been to at least the semifinals eight of the past 12 years, and five of the last eight finals.

So what’s the most important thing he does well on grass?

“I just believe that when Novak is at his best, on any surface,” Wawrinka said, “he’s really tough to beat.”

One key to Djokovic’s success at the All England Club — and, really, anywhere — is an ability to return even the most dangerous serves. Another is his relentless, body-contorting defense. His effortless groundstrokes help, too.

Like many players, Djokovic didn’t play on grass until his late teens.

“I did struggle a little bit at the beginning, in the first couple of years of my career, on the grass,” he said, “to really understand how I need to move on the court, how I need to adjust my swing and my game in general, tactically what I need to do.”

Now he does just fine on the turf and gets to keep enjoying his ritual of plucking a few blades to shove in his mouth after winning the Wimbledon final.

He’s been busy with more than just his game in the run-up to Monday’s tournament start, though, spending 7 hours in a meeting Friday night as president of the ATP Player Council.

Djokovic has been at the center of some messy internal politics that became public, including the decision not to renew the contract of ATP chairman Chris Kermode and the resignations of four members of the council this weekend.

“I think it’s a system and a structure that keeps on failing us,” Djokovic said. “I did consider also stepping down. I think my team wants me to step down, honestly.”