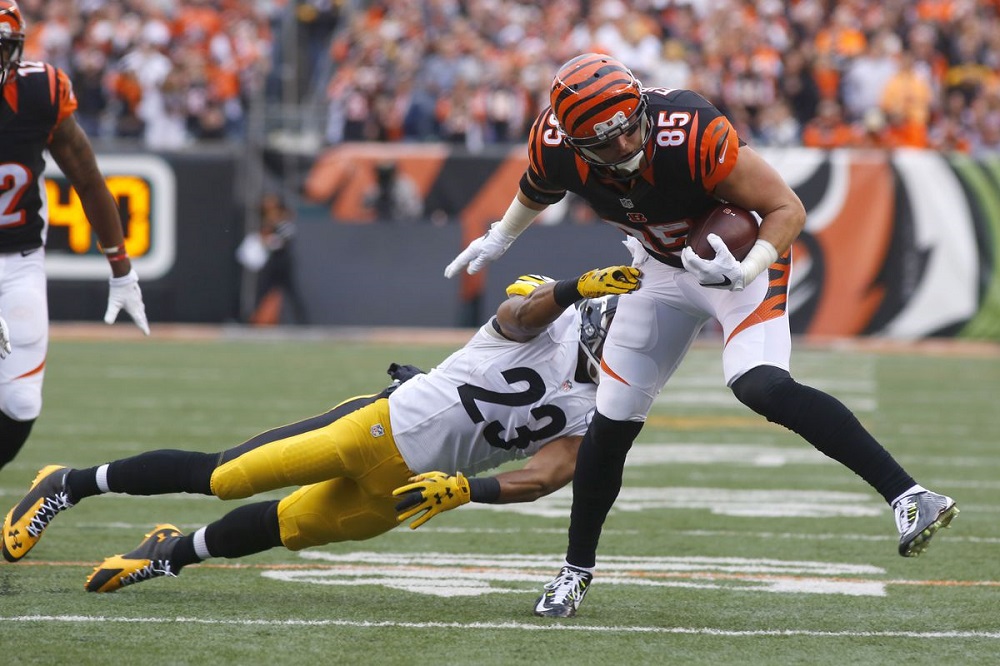 For the first time in years, the NFL has started backing off the whole “No Fun League” thing, allowing players to celebrate big plays on the field without fear of losing their team 15 yards. The NFL has not, however, backed off their “safety” rules (even though concussions and serious knee and leg injuries are up).

The main problem with the league’s new policies is that they unfairly target and restrict defensive players. They tell the tackler what his responsibilities are, but they don’t have any rules regarding proper movements and positions for the tacklee.

Defensive players around the NFL are starting to get upset—and rightfully so. Players on the other side of the ball can find themselves on the wrong end of a hefty fine from the league for a hit, which often might be the fault of the quarterback or the ball carrier. Pittsburgh Steelers safety Mike Mitchell found himself in a situation like this one against the Cincinnati Bengals.

“I’m gonna mess around and get hurt trying to protect an offensive player because he’s running an over route,” said Mitchell. “Damnit, your quarterback shouldn’t have threw that ball messed up. That happened two years ago. I’m not joking at all. Andy Dalton threw a ball to Tyler Eifert two years ago. Tyler Eifert had to dive for it. I was aiming for his gut, but if he don’t dive, he don’t get hit in the head. That’s 50 grand out of my pocket though because Andy throws a bad ball. Make that make sense.”

The fine wasn’t even the worst part for Mitchell. On top of losing the money out his pocket, he also had people on TV that he doesn’t know calling him dirty.

“And at first you’re taking our money, but now I got assholes like Matt Hasselbeck calling me a dirty player and trying my character, and we never met before,” finished Mitchell.

Miami Dolphins defensive end Cameron Wake has noticed the same thing. If the league is going to tell defensive players what to do, why don’t they tell running back and wide receivers to slow down and stop diving?

“Where’s the line?” asked Wake, rhetorically. “Are you going to tell all the running backs, listen you’ve all got to slow down a little bit? Receivers? We’re rarely defenseless as a defender. I mean my knees aren’t valuable to the NFL? They can cut me, they can do everything; but if I brush a quarterback, I get fined.”

Additionally, defensive players are usually the ones labeled dirty for big hits that result in injury. However, as Mitchell explains, there’s a big difference between a hit on a player during a play and what New England Patriots tight end Rob Gronkowski did against the Buffalo Bills.

“SteelerNation @George_iloka is a good friend,” tweeted Mitchell. “We’ve spent many summers training together. HES NOT A DIRTY PLAYER. He’s a Standup guy just a hard-nosed no bs player. In no way was he tryna hurt AB just like I know @TeamJuJu wasn’t trying to hurt #55. Football is violent! #Facts. 19/43 were making a football plays in football games during the PLAY more specifically before the whistle. 87s play was a downed man post-whistle. I get the league having player safety that’s fine but don’t tell me those are the same offense.”

Gronkowski was suspended one game for his actions, however, offensive players rarely face penalties for their actions on the field as compared to defensive players. It’s like the refs expect defensive players to screw up and they’re always waiting for any opportunity to say they did.

Finally, Mitchell reminds us all that football is a rough sport. No one is trying to sugar coat it (except for the NFL, but we all know they’re full of it). But, while football is a contact sport, everyone that plays knows what they’re getting into—and it changes their lives forever.

“You have to know what the risks are when you sign up,” continued Mitchell. “No one wants to be paralyzed, and no one wants to have head injuries. These are all things that are negative. But let’s not try to [label] football a dangerous or barbaric game. This is how I’ve changed my family legacy. Before I got drafted I had $368 in my bank account. That’s far from the case today. I changed my family legacy by this beautiful game of football forever. Let’s not try to turn it into some evil, dirty game. It’s football. It’s no different from UFC fighting.”

So, next time you’re watching an NFL game, watch the offensive player too. Could the helmet-to-helmet collision have been prevented if the running back doesn’t put his head down? Or is Andy Dalton doesn’t throw a bad pass?