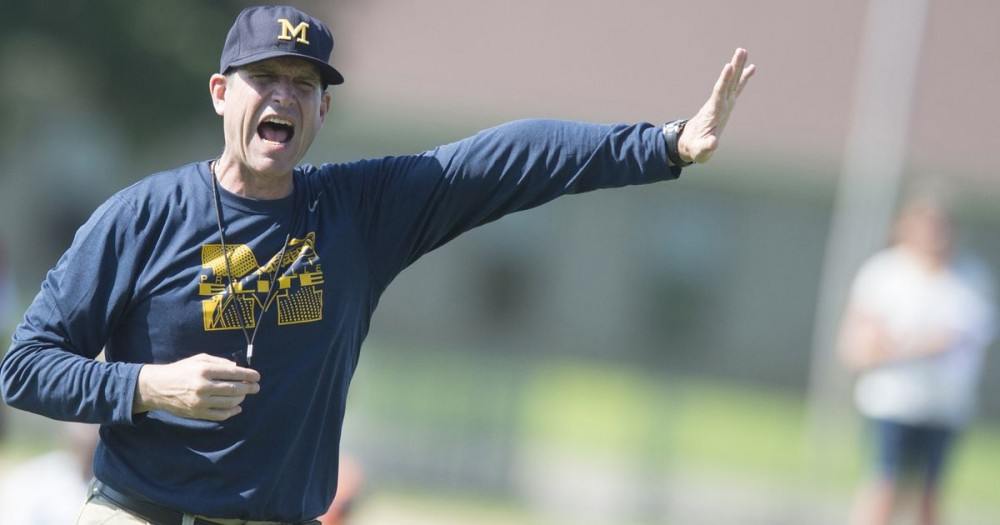 Not surprising, but Jim Harbaugh has fired back at the NCAA over their latest actions regarding him.

The Michigan coach says, “the incompetence of the NCAA has reared its ugly head yet again,” in a story published Tuesday by Sports Illustrated.

Harbaugh was reacting to Friday’s decision that bars football coaches from having camps or clinics away from campus or facilities that schools regularly use for practice or games.

The envelope-pushing coach, whose sweeping tour of the South last year created a stir, already had stops lined up in Florida and Alabama this year.

Harbaugh says, “this is going to affect thousands and thousands of people,” and adds, “I suggest we drop the term ‘student-athlete’ for consistency.”

Maybe the NCAA thinks they have a better handle on Michigan head coach Jim Harbaugh after shutting down his satellite camps with a new rule prohibiting such moves. Harbaugh had been holding camps in various locations in order to get attention outside his own state’s borders.

Not a bad idea to be a traveling circus of sorts in the off-season. And judging by the reaction from fellow coaches in the regions visited by Harbaugh and crew, it was a genius idea.

“The Council approved a proposal applicable to the Football Bowl Subdivision that would require those schools to conduct camps and clinics at their school’s facilities or at facilities regularly used for practice or competition. Additionally, FBS coaches and non-coaching staff members with responsibilities specific to football may be employed only at their school’s camps or clinics. This rule change is effective immediately.”

Nice try, but this in no way will stop Jim Harbaugh from getting the attention he seeks. This new rule change only served to put Harbaugh and his Wolverines back in the spotlight with headlines everywhere about the “Harbaugh Rule.”

Trust me; Jim Harbaugh will have a nice bronze tan from the glowing spotlight he’ll create until the new college football season kicks off in September 2016.

What the NCAA is dealing with is a man possessed. That’s not just a word to describe Harbaugh’s drive. I believe inside the man resides a demon that was super close to defeating Lucifer for the right to run Hell, and can’t stand the thought of losing. And since San Francisco’s ownership decided to fire the second best coach in the NFL, now the NCAA and all the other coaches get to deal with this demon.

Right now somewhere in the basement of Michigan’s “Allan and Alene Smith Law Library” is a law student combing over the gigantic NCAA rulebook. His one mission is to find any and all loopholes for Jim Harbaugh to exploit in order to have an edge over the other 128 other D1 football schools.

People outside Ann Arbor, Michigan may not like the way the man is going about running his program, but they better get used to it. Lots of people don’t like the thought of Donald Trump getting the Republican Presidential nomination either because of his attention-grabbing antics. Yet, it’s those very antics that have made Trump rise about his boring competition.

That’s all Harbaugh is doing. Simply standing out in the crowd of old school college coaches afraid to rock the damn boat. Harbaugh will set the boat on fire and sink it if it means getting a top recruit over Nick Saban vs. Urban Meyer.

By the time they change one rule, Harbaugh will already be on to another marketing plan. Instead of trying to play catch-up with Harbaugh, the NCAA would be wise to hire someone to track every move by the wily former quarterback. That may be the only way to keep a handle on a coach willing to do anything to win, including breaking rules that haven’t been written yet.