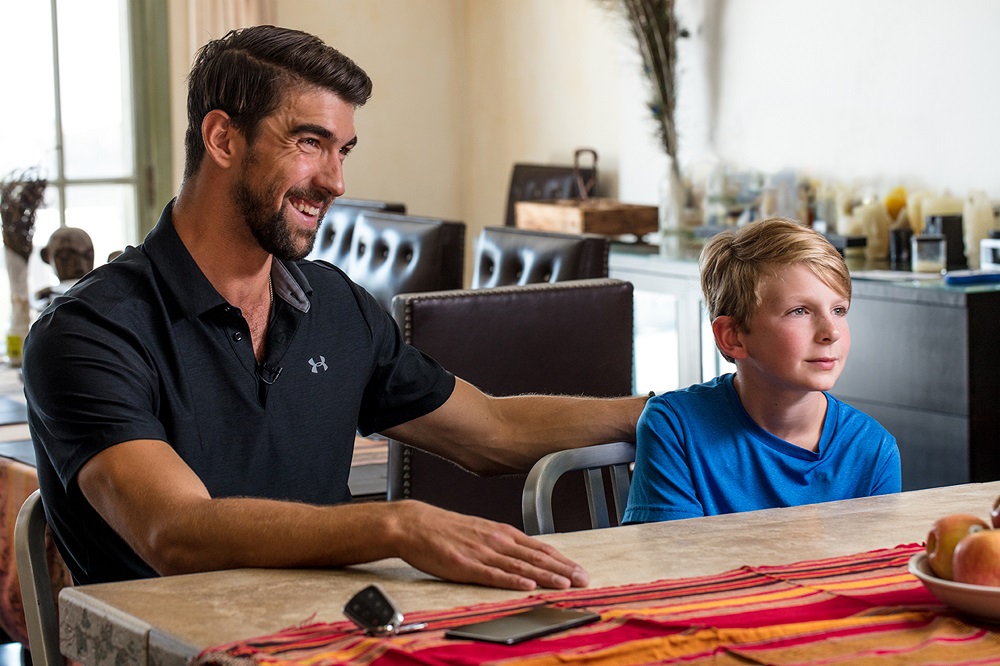 We all talk about feeling anxious at different times, but quite a large segment of the population are actually crippled by both it and depression. You’d be surprised to know that over 40 million Americans over the age of eighteen suffer from anxiety (this does not include depression and social fear as that would jack the numbers up way more), but less than 40 percent receive treatment for it.

This is according to the Anxiety and Depression Association of America which states that the illness can arise from a number of factors — such as genetics, brain chemistry, personality and life events —and though disorders associated with anxiety are highly treatable.

Most people just deal with it thinking it’s just a part of life or feel ashamed that they are unable to control it. Swimming legend Michael Phelps shares his intense struggles with a young fan experiencing anxiety.

The champion Olympic swimmer, 32, has become a prominent advocate for mental health over the years thanks to his candidness about his anxiety and depression, which caused him to have suicidal thoughts regardless of his record-breaking success.

A new documentary about anxiety argues that everyone to some extent suffers from stress, nerves, and social fear. And, to make their point, the filmmakers have enlisted as Exhibit A the most decorated Olympian in history.

Michael Phelps appears in “Angst” to share his story of being bullied and depressed, leading to severe anxiety. The swimmer, winner of 28 Olympic medals, would look in the mirror and not like what he saw.

Phelps, who was arrested for drunk driving in 2004 and 2014, has openly discussed his mental health in the past. While addressing an audience at George Washington University in May 2017, Phelps admitted he felt depressed at three different stages after competing in the Olympics.

“I remember sitting in my room for four or five days not wanting to be alive, not talking to anybody,” he said. “That was a struggle for me … I reached that point where I finally realized I couldn’t do it alone.”

“Once I opened up about that and things that I had kept inside of me for so many years, I then found that life was a lot easier. I got to the point where I understood that it’s OK to not be OK,” he says in the film.

“I just didn’t like who I was. If something was bothering me that would start to come up — and I would start feeling angry or depressed or upset — I would almost ignore it,” Phelps tells a boy with anxiety in the new IndieFlix original documentary, Angst. “I would shove it even further down, so I wouldn’t have to deal with it, so I would never have to talk about it. It got to my tipping point, where I just blew up. I couldn’t take it any longer.”

While mental illnesses such as anxiety and depression can affect anyone, research by the Northern Ireland Association of Mental Health shows that athletes may be more susceptible to mental illnesses than the general population, due to factors such as injuries, competitive failure and overtraining leading to psychological distress.

Talking about his feelings, instead of keeping them bottled down, is what helped Phelps gain control of his illness, he says.

“I started talking about the things that I went through, and once I opened up about that and things I had kept inside of me for so many years, I then found that life was a lot easier,” he tells his young fan. “I got to the point where I understood that it’s okay to not be okay.”

“Angst,” an IndieFlix film designed to be screened at schools and community centers, features candid interviews with children and young adults discussing their anxiety, along with advice from mental health experts and resources and tools. Phelps is like a muscular explanation mark for what the filmmakers wanted to show — that even world champions can feel low.

“I’m grateful because my mission with this film is to help make the world a better place and I believe he is so additive on that level,” said Scilla Andreen, CEO and co-founder of IndieFlix.

“If we can introduce prevention, self-care, and well-being to our children — even in the pre-K and kindergarten years — they can have a completely different life.”

Andreen hopes the film will reach more than 3 million people around the world from 25,000 community and school screenings. “Angst” was filmed in the U.S. and United Kingdom and is appropriate for children starting at age 10.

“Anxiety is totally treatable,” she said. “It can be a precursor to so many things that can then lead to addiction, homelessness, dropping out of school and a host of other mental health challenges.”

Anxiety disorders are the most common mental health challenge in the U.S., impacting 54 percent of females and 46 percent of males, with age 7 being the median age of onset, according to the World Health Organization. The American College Health Association has found that undergraduates reporting “overwhelming anxiety” jumped to 62 percent in 2016 from 50 percent in 2011.

“Talking about it is the most effective thing you can do and, of course, the last thing you want to do,” said Andreen. In addition to talking, writing about your feelings or connecting to music can help. “Anything that helps you to take a break from the anxiety and move the energy to the front of the brain.”

Andreen, whose distribution streaming service embraces projects that push for social change, was bullied as a child and learned something about herself while working on the film.

“Everyone has anxiety. And I learned in making the movie that I have social anxiety. I never even knew that. I just thought I was born less than everyone else and that was my lot in life. I would always have to work harder, try harder, never fit in,” she said. “I don’t feel so alone.”

In addition to the documentary, IndieFlix is creating a web-based series on anxiety to dig deeper into the issue and has produced a virtual reality component that allows users to experience a panic attack firsthand.

Andreen believes anxiety levels are so high in part because of the pace of modern life and the amount of time people spend with their electronic devices, which takes away from connecting in person and developing empathy.

“We need more face time with each other,” said Andreen, a former Emmy-nominated costume designer. “We just stopped doing it. We’re out of practice, that’s all.”