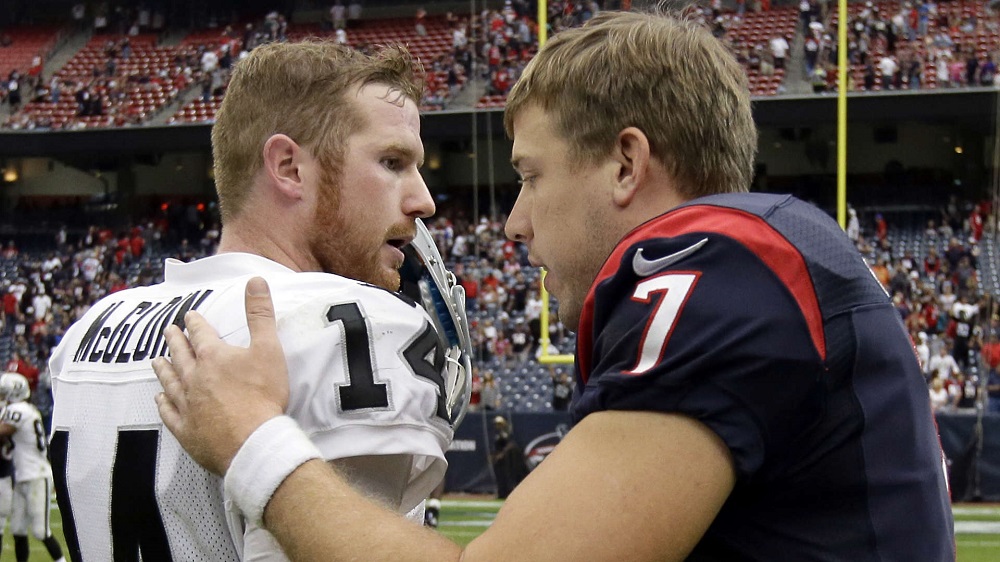 Should the Raiders Have Played Matt McGloin in Embarrassing Wild Card Loss to Texans?

When you’re a third string quarterback in the NFL, you don’t get a few reps at practice; you get nothing. For the Oakland Raiders, Derek Carr got the majority of the work, followed by backup Matt McGloin. When Carr broke his leg Week 16, third-string rookie quarterback Connor Cook started getting a chance to warm up with the team. When McGloin went down with a concussion the next week, Cook was thrown into the starting role.

So, with about two weeks of real NFL practice experience under his belt, the rookie out of the Michigan State made his first start Saturday in the team’s AFC Wild Card matchup against the Houston Texans. He didn’t do well.

At halftime, the Raiders were down 20-7 as Cook completed only 28.6 percent of his passes on a 9.8 passer rating. It wasn’t looking good. So the question at halftime was should head coach Jack Del Rio pull Cook for the injured Matt McGloin?

“I asked at halftime and the coaches really felt there were other things that were kind of contributing and there wasn’t going to be a big change based on the change at quarterback,” said Del Rio after the game. “So we stayed the course with it.”

Of course, it didn’t turn out well for the Raiders. They lost 27-14. Cook finished 18-of-45 passing for 161 yards, one touchdown, and three interceptions in one of the worst playoff performances by a QB in recent memory. Even if the change wouldn’t have accomplished anything, it was worth a shot.

“It’s not my decision,” said McGloin, who was suited up and cleared to play. “It doesn’t really matter what I do, what I think. I had tremendous help from the training staff, and the strength coaches throughout the course of the week to be as healthy as I could be to be available if they needed me to go in.”

Maybe McGloin was hurt worse than the Raiders were putting on. Or maybe Del Rio gave up at halftime and was content to watch the rest of the playoffs from his beach house. I guess it doesn’t matter now.