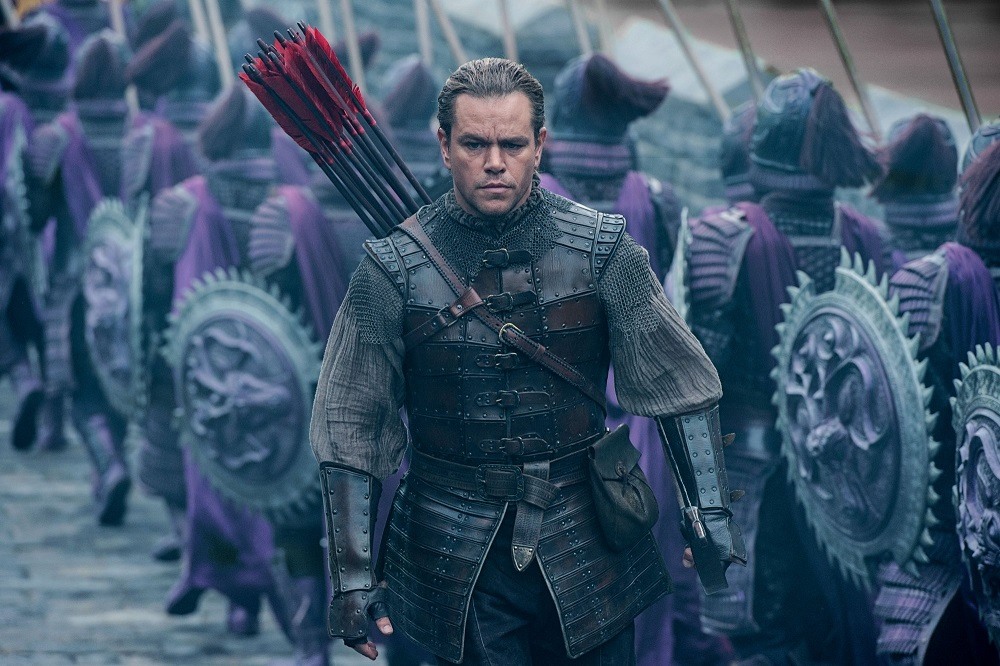 As sad as it may be, whitewashing in Hollywood will probably not end anytime soon and Matt Damon’s The Great Wall is dealing with this issue now. That may be a pretty cold opinion, but it’s still the truth. There recently has been a number of whitewashing cases that caused intense outrage from moviegoers.

After the first image was released of Scarlett Johansson as an originally Asian character in the upcoming Ghost in the Shell, fans of the source material (among others) criticized how blatantly Hollywood would change things to their liking. There’s no logical reason to criticize the talented Johansson for that choice, but rather the studio’s unseemly decision making. And surely coming as no surprise, there’s yet another whitewashing issue that is currently infesting The Great Wall, a Chinese blockbuster starring the great Matt Damon.

The Great Wall is the first English-language film by acclaimed Chinese director Zhang Yimou. It tells a fantastical story about the building of (you guessed it) China’s Great Wall, except in this case there are giant monsters attacking the soldiers who defend it. Damon stars in the lead role as a strong-willed Caucasian leader that helps to keep his fellow Chinese soldiers fighting. Since the film’s first trailer debuted that showed Damon leading the charge, the casting was seen as if he was the “white savior” of the film.

It doesn’t look too good, that’s for sure, but Damon is a sensitive enough person to treat the situation with respect. While promoting The Great Wall at the New York Comic-Con, Damon addressed the film’s heated whitewashing controversy. He first decided to lighten the mood by saying, “Yeah, it was a f**king bummer.” But, then he went on to discuss the situation in a more serious way.

“I had a few reactions. I think I was surprised, I guess because it was based on a teaser. It wasn’t even a full trailer, let alone the movie. So, to get those charges levied against you…what bums me out actually is that I read The Atlantic religiously. And there was an article in The Atlantic, [so] I was like really guys? To me whitewashing, I think of Chuck Connors when he played Geronimo…there are far more nuanced versions of it, and I do try to be sensitive to that.”

That’s definitely a mature way of looking at, despite how some may still feel about it. Damon went on to say that his co-star Pedro Pascal gave a little levity to the situation in a phone call by adding, “Yeah, we are guilty of whitewashing. We all know only the Chinese defended The Wall against the monster, [but]…it was nice to react a little sarcastically ‘cause we were wounded by it. You know, we do take that seriously. That’s a serious thing.” Pascal lastly joked, “Don’t quote me!”

What’s important to note is that the The Great Wall isn’t a film that’s trying to make some big statement to the world, it just wants be a fun blockbuster with monsters. Is whitewashing wrong? Yes, obviously. But that doesn’t mean all of the righteous anger of moviegoers should be directed towards a film like The Great Wall that is clearly very aware of its own absurdity. By adding the film to the list that includes Ghost in the Shell, the no-need-to-discuss Gods of Egypt, Cameron Crowe’s Aloha, Exodus: Gods and Kings, and so many more, what’s going to be the outcome? It’s hard to say at this juncture, but you probably already know that it won’t be a satisfying one. However, Damon went on to give a final comment out of respect for The Great Wall.

“From a marketing perspective, like what’s the worst wipeout for a marketing team than to have that happen as a backlash against the teaser that you put out. They’re trying to establish a number of things within 30 seconds or to a minute. It’s not a full-length trailer. It’s a teaser, and they’re trying to tease the monster…Look it’s a visual filmmaker. You probably don’t know who this director is in middle America. [He’s the] Steven Spielberg of China right? Don’t worry; they speak English in this movie. They’re trying to establish all these things, and by the way, there’s monsters right. They’re trying to lay a lot of pipe in that 30 seconds. And I guess in retrospect like I watch that teaser a number of times to try to understand the criticism, but ultimately where I [sic] came down to was, if people see this movie and feel like there’s somehow whitewashing involved in a Creature Feature – I will listen to that with my whole heart. And I will think about that, and I will try to learn from that. But I will be surprised if people see this movie and have that reaction, I will genuinely [be] shocked. And it’s a prospective, that as a progressive person, I really do agree with and try to listen and try to be sensitive to, but ultimately I feel like you are undermining your own credibility when you attack something without seeing it. I think you have to educate yourself about what it is and then make your attack or your argument and then it is easier to listen to from my side.”

Take what you will from his words. But what’s great about this situation is that there’s clearly a lot of people who are taking the time to speak out against these issues. That, in and of itself, is a very proactive move for a society that usually spends its time rattling on about superfluous matters. Good for us. And hey, if you have an opinion on the whitewashing matter that you just can’t help but say, let us know in the comments below.