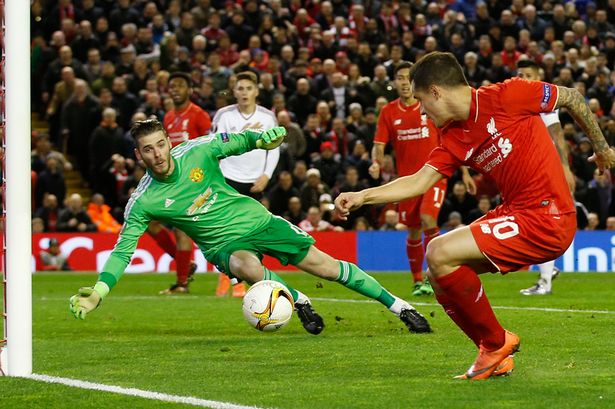 Manchester United suffered a major blow in the first leg of their round of 16 tie at Anfield. Liverpool won 2 – 0 at home and are now in complete control of the tie. Jurgen Klopp’s men took the lead in the 20th minute of the match after Memphis Depay’s foul on Clyne resulted in a penalty. Daniel Sturridge made no mistake and slotted the ball past David de Gea to the delight of Liverpool supporters. Roberto Firmino added the second of the night in the 73rd minute to give his side a comfortable cushion.

The Merseyside giants dominated the game with eight shots on target. De Gea once again came to the rescue of his team with some very crucial saves and because of his brilliant performance, United still have a decent chance of making a comeback next Thursday. Manchester United had only one shot on target, and they never looked in-charge of the proceedings.

However, overcoming a two-goal deficit is not an unattainable mission for the 20-time English champions. Man United have been very unpredictable this season, and they have put in some good shifts throughout the season. They lost to Danish minnows FC Midtjylland in the first leg of their round of 32 tie. They won 5 – 1 in the match at Old Trafford to gain entry to the next round. Although, it will be unfair to expect a similar result against Liverpool but United can certainly make a comeback in the fixture at home.

The defeat put another dent on Van Gaal’s future at the club. His departure from Old Trafford in the summer seems inevitable now, but early elimination from the Europa League and the FA Cup will also put a dent on his overall managerial career.

In the pre-match conference, Louis van Gaal said that the club owes a big result to the fans.

“It’s a big challenge, but we have to believe in it. I have spoken only to the players about victory,” Van Gaal told his pre-match press conference.

“We owe always to the fans a big result because the fans are paying to see that and we have to deliver.”

Jurgen Klopp claims the Reds know how to play against the 20-time English champions. According to the German boss, Liverpool needs a strong start to the game and is not taking the win from first leg for granted.

“We know that we know how to play them,” said Klopp.

“A good start in the game is important. It’s not the most important thing, but we will try to play similarly or more intensive than we did at Anfield.

“It was a good night for us last week, but at the same time, it’s only halfway.”

If Liverpool manage to score an away goal at Old Trafford, Manchester United will have to score four goals to reach the quarter-finals. It will be a daunting task for the Reds, who have underperformed on several occasions this season. But the three-time European champions shall not be ruled out before the referee’s final whistle at Old Trafford.