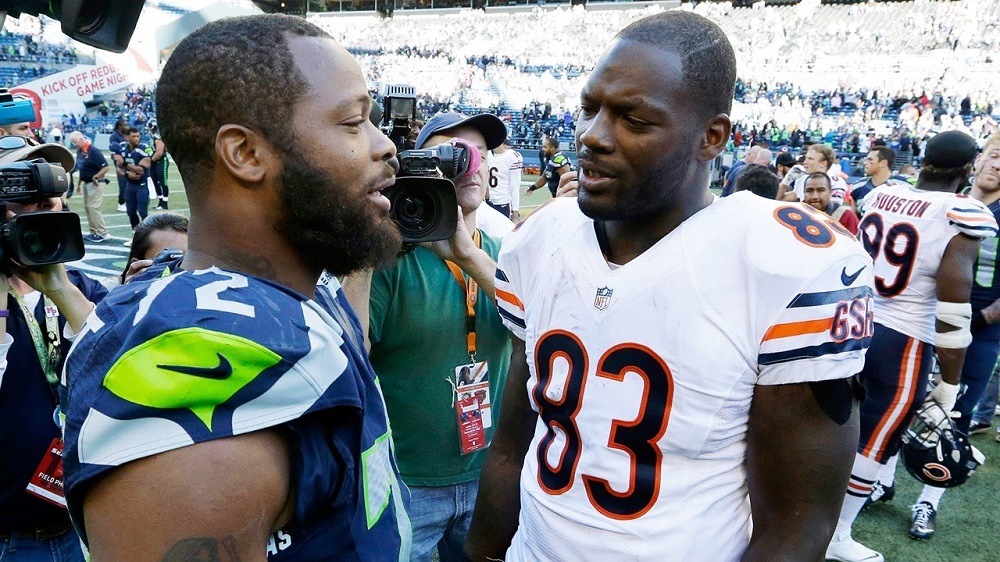 As the New England Patriots and Seattle Seahawks prepare for a Super Bowl XLIX rematch Sunday Night at Gillette Stadium, all eyes are on brothers Martellus Bennett and Michael Bennett.

Both are outspoken stars, Martellus the tight end for the Patriots and Michael the defensive end for the Seahawks. Unfortunately, Michael won’t be suiting up for this matchup. While Martellus claims he isn’t upset, you know he wants his brother out there. Michael may be great, but the sibling rivalry is always there.

“Mike’s a hell of a player,” said Martellus of his brother. “He’s always been. He does a lot of great things for the Seahawks, and it’s always fun—well, it’s not fun, actually. I hate playing against my brother…You always want your brother to be healthy; you don’t want him to be hurt, and you always root for him to do well, but not this week. You want him to be—‘Hey, I don’t want you to be great, either.’ It’s like, find some way to be a C-average student like you were growing up.”

Martellus Bennett has always been close to his brother and his team. Of course, getting to know the Seahawks over the years hasn’t been easy for the little brother who has never played in a playoff game. Martellus has had to sit back and watch while Michael played in eight including two Super Bowls in a row, winning one of them.

“Unfortunately, the last couple of years, I was forced to go watch Michael in the playoffs,” continued the younger Bennett. “I would sit in the suite with all the families, and I know all their kids and everything. It sucks to watch other people play at that time of year.”

However, this season, the Patriots are 7-1, and the Seahawks are 5-2-1. Martellus is all but guaranteed a shot in the playoffs, and if these two teams keep it up, the brothers may even have a chance at playing against each other in the Super Bowl.

It wouldn’t be as exciting as the Harbaugh Bowl, but hey, it’s something.