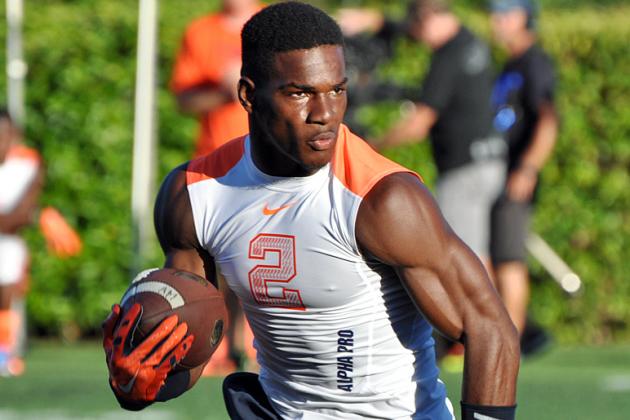 Another week, another player suspended indefinitely for bad behavior off the field as Miami Hurricanes have dealt with running back Mark Walton’s DUI arrest and charge this weekend. He was also driving with a suspended license, making charges even worse, and causing the Hurricanes to suspend him indefinitely from the team.

County records show that Walton was booked into jail late Saturday afternoon, then released a few hours later. It was unclear if he retained an attorney, and police said the investigation was continuing.

“We are aware of the situation regarding Mark Walton, and we have taken immediate action by suspending him from the team,” Miami athletic director Blake James said in a statement released by the university.

Meanwhile, a person familiar with the situation told media outlets that part of the investigation centered around whether Walton impersonated a police officer in a separate incident earlier Saturday. The person spoke on condition of anonymity because that probe is ongoing.

Walton, 19, had bloodshot and watery eyes and was slurring his speech when police stopped him early Saturday, according to the arrest affidavit. In the document, police said Walton nearly fell when asked to walk to the back of the vehicle.

Breath tests showed Walton with blood-alcohol levels of 0.059 and 0.06, police said. Those are under the state thresholds for DUI for those 21 and older, but well over the Florida threshold of 0.02 for those under 21.

Court records showed Walton has an unpaid speeding ticket from June 15, 2015, which was believed to be the cause for the suspended license. He owes $434 for that ticket, records showed.

Walton emerged from the spring practice season atop the team depth chart at running back, according to a team spokesman, which would have put him on pace to be the starter in the Hurricanes’ backfield next fall. Instead, his future with the Hurricanes is now most uncertain — Miami booted a kicker from the team last month when he was cited for DUI.

Walton led Miami with nine rushing touchdowns and 10 total touchdowns as a true freshman last season, plus topped the Hurricanes with 300 kickoff return yards. He had a key role in Miami’s most memorable play of 2015, the eight-lateral kickoff return as time expired for the game-winning touchdown at Duke.

His arrest comes one week after Miami’s spring game. Only minutes after that game ended, Hurricanes coach Mark Richt urged his players to help each other stay out of trouble and avoid negative headlines over the coming weeks and months between the spring season and training camp.

Walton is a Miami native who starred at Booker T. Washington High. He finished his high school career with 45 touchdowns and chose the Hurricanes over offers from Auburn, Florida State, Tennessee and South Carolina, among others.