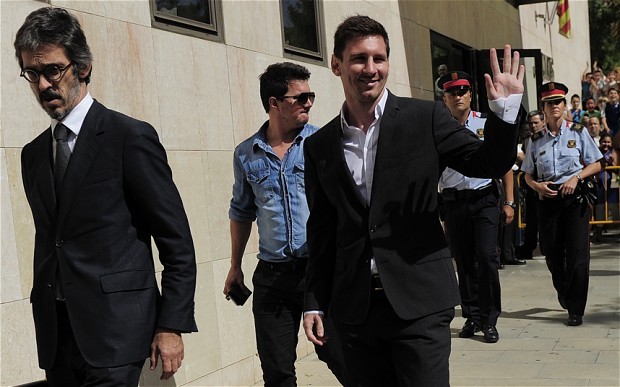 It’s a different world from the soccer field, but Lionel Messi was all smiles and waves to fans as the Argentina star and his father headed to court to counter charges against them. Their tax fraud trial opened on Tuesday in a Barcelona court.

Messi has had to leave Argentina’s preparations for the Copa America in the United States to defend himself from accusations that he failed to properly pay taxes for part of his earnings received from the Spanish club.

Messi and his father, Jorge Horacio Messi, have been charged with three counts of tax fraud and could be sentenced to nearly two years in prison if found guilty of defrauding Spain’s tax office of 4.1 million euros ($4.5 million) from 2007-09.

They have denied any wrongdoing, and even if found guilty, are unlikely to face any jail time.

Absent on Tuesday, the Argentina playmaker is not obliged to show up until Thursday, when he will testify before a judge. A verdict and any sentencing are not expected until next week.

“Everything is good. All good,” said Lionel Messi‘s lawyer, Enrique Bacigalupo, after arriving at the Barcelona court on Tuesday.

Asked whether the player was calm, Bacigalupo said: “Everybody is calm.”

As for the defense team’s tactics for dealing with the prosecution case, he added: “We will see that as the trial goes by. Because we have to wait and see how the accusation (lawyers) will plan theirs. We like to counterattack. Like in football.”

The trial is centered on alleged unlawful activities of Messi’s father, but authorities said the player knew enough to also be named in the case. Officials said that although Messi was mostly unfamiliar with tax issues, there was sufficient evidence to believe he could have known and consented to the creation of a fictitious corporate structure to avoid paying taxes on income from his image rights.

In addition to each facing a prison sentence of 22 months and 15 days, Messi and his father could also be fined in the amount defrauded and ordered to pay all legal proceedings and the loss of any possible tax benefits for a year and a half. 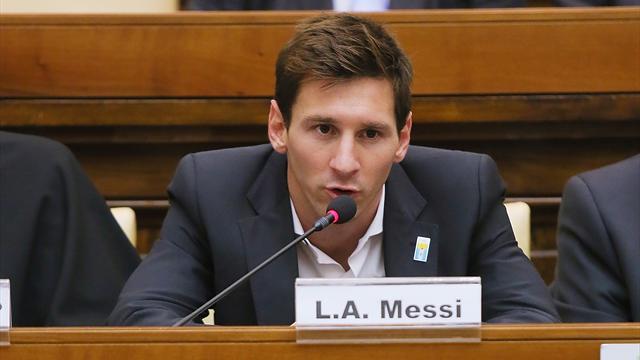 With the Copa America beginning Saturday, Messi flew back to Spain after Argentina’s warm-up match against Honduras at the weekend, while the rest of the squad went straight to the U.S. to prepare for the tournament.

Messi will only join his teammates after the trial ends in Barcelona, just four days before Argentina debuts against defending champion Chile.

Messi is just the latest high-profile player to have to deal with Spain’s tough tax system. Neymar, Javier Mascherano, Adriano and Xabi Alonso also were targeted by authorities recently.

Mascherano, Messi’s teammate with Argentina and Barcelona, earlier this year was handed a suspended one-year prison sentence for not paying nearly 1.5 million euros ($1.6 million) in taxes for 2011 and 2012. Brazil striker Neymar recently had to testify before a judge because of alleged irregularities involving his transfer to Barcelona. He and the club were accused of withholding the real amount of the transfer fee, in part to avoid paying the full amount of taxes.

Messi was also being investigated by Spanish tax authorities after his name was among those released in the probe of international offshore accounts, known as the Panama Papers, although he was not charged for those allegations.