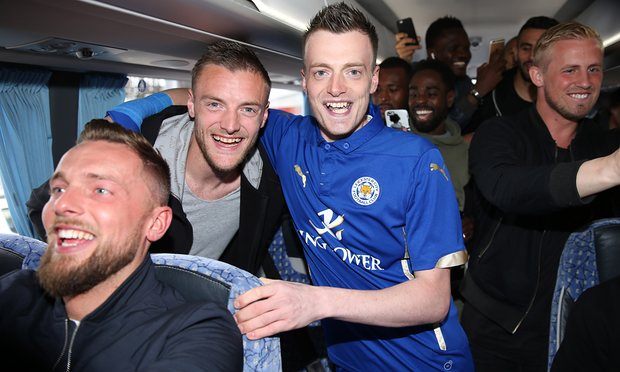 It took over a century for Leicester City to get a victory like the Premier League championship, but now players like Jamie Vardy are feeling what it’s like to be placed in the harsh limelight.

There are certain pitfalls to being a club’s first title-winning side. Leicester City’s once-unheralded players discovered Tuesday that going for a pizza is no longer so easy once you’re a Premier League champion.

Once word spread the squad was celebrating at an Italian restaurant, hundreds of fans crowded into the central shopping district to provide a hero’s welcome for English soccer‘s most improbable champions.

Leaving the San Carlo restaurant was even harder as the entrance was besieged by supporters desperate to catch a glimpse of the team that defied soccer logic by accomplishing one of the greatest turnarounds in sports history.

The Foxes had just survived the serious threat of relegation last year when they were made 5,000-1 outsiders for the title in August. Nine months later, British bookmakers are making multi-million-pound payouts to those Leicester fans who bet on their team out of loyalty rather than the expectation of glory.

“It is safe to say I never thought I would be in this position now,” captain Wes Morgan said. “The journey we’ve been on is fantastic. It’s an achievement that might not be achieved again.”

No wonder the 32-year-old Morgan and his teammates are savoring every minute of it. Few players would be happy trudging into training after delivering a title for a manager who expected to be in a relegation battle, but the groggy-eyed squad reported for duty as expected on Tuesday morning.

The players had been apart for only a few hours after watching together at top-scorer Jamie Vardy’s house as the title was clinched by second-place Tottenham’s challenge ending with a draw at Chelsea.

The training session ended only after the club’s Thai owners landed by helicopter at the facility, which is surrounded by tightly packed rows of houses, to greet the players. They will all surely never get tired of having to pose with “Champions” banners and sing “Champione.”

En route to lunch, there was a brief stop by their King Power Stadium, where one supporter — a dead-ringer for Vardy — was briefly allowed onto the team coach to greet the striker.

Vardy himself could probably have done with assistance cleaning up his house after hosting a party to celebrate the best night in the club’s 132-year history.

“The boys were standing on furniture – I hope Vards’ house is all right,” Morgan said.

“After the initial euphoria, a lot of people couldn’t believe what had happened. There were a few tears.”

Twitter reported an 86 percent spike in usual activity in Britain as Leicester won the title, with the most-shared posts coming from inside the party at Vardy’s house.

Relegation was forecast for this team, not embarrassing the gilded elite.

Even more astonishingly, the title was won with two games to spare, leaving the mighty Arsenal, Chelsea, Manchester United and Manchester City trailing in their wake.

Vichai Raksriaksorn, who also owns Thai duty-free giant King Power, never expected to be posing with his own title winners when he bought Leicester in 2010 in a deal that valued the club at 39 million pounds (now about $57 million).

The Foxes had only just climbed out of the third tier back then and took until 2014 to end their 10-year exile from the Premier League, where they now tower over every other team in England.

Before Leicester, the last first-time champion of England was another modest East Midlands team, Nottingham Forest, back in 1978. Forest followed that pre-Premier League era triumph by winning the European Cup not once, but twice.

The magnitude of Leicester’s feat will be measured by what happens next.

“We made a lot of dreams come true,” Leicester midfielder Danny Drinkwater said. “We’re not going to drop off. We’re going to push on.”

However, Leicester will have to keep stars like Vardy and winger Riyad Mahrez from the grasps of wealthier clubs.

“We are not a team who produces players to be developed later by other teams,” said the owner’s son, Aiyawatt Srivaddhanaprabha. “All players want to stay and keep on fighting together to see how far they can go. So selling players is not on our agenda.”

Manager Claudio Ranieri has cautioned against expecting Leicester to retain its title.

“I think no,” Ranieri said when asked about defending the trophy. “But we want to continue to build.”

Ranieri’s task when he was hired as manager last year was just keeping Leicester in the top flight. Now the 64-year-old Italian has his first-ever major title.

“The emotion was at the maximum level,” Ranieri, who was fired from his last job with Greece in 2014, said before training. “It means the job is good. I am very, very happy now because maybe if I won this title at the beginning of my career, maybe I would forget. Now I am an old man I can feel it much better.”

So too can lifelong fans like 51-year-old Sharanjit Singh, who has endured decades of heartache following a team that flitted between leagues, constantly battling relegation or seeking promotion.

“It doesn’t matter if we do nothing like this again,” Singh said at Leicester Market, which was festooned with Leicester banners.

The celebration will continue for weeks. Before the victory parade, Leicester has to receive the trophy on Saturday after the penultimate match of its season against Everton.

“I am going to try and hold back the tears, it is going to be very emotional,” Morgan said. “I can’t wait to lift the trophy.”