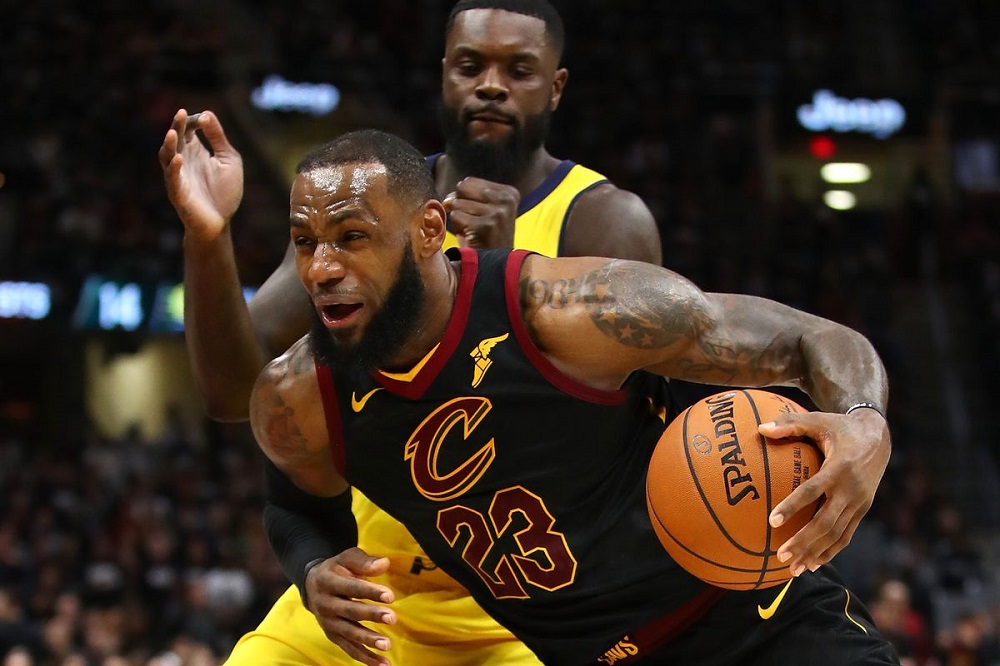 As the NBA playoffs get underway, we saw two big upsets in Game 1. The New Orleans Pelicans stole homecourt advantage from the Portland Trail Blazers and the Indiana Pacers took down LeBron James and the Cleveland Cavaliers.

LeBron isn’t used to a loss like that, especially in the first round. He is, however, used to being down in the playoffs, so when asked if he’s sweating it, he reassured everyone that he is not.

For the Cavs, inexperience seemed to play a large factor in the 98-80 blowout loss to Indiana. Jordan Clarkson, Larry Nance Jr., and Rodney Hood all put forth less-than-perfect performances that don’t stack up with what we’ve come to expect from them. Maybe it was the nerves, maybe they got in their own heads, maybe they expected LeBron to just do everything for them.

Whatever the issue, they need to get it together. LeBron wasn’t shaken after the Game One loss, giving them the benefit of the doubt for being young, but he certainly won’t be so kind in the locker room, especially if the Cavs drop Game 2 before heading to Indiana.

“I think the intensity,” said LeBron. “How much different a regular-season game is compared to a postseason game. It happens that fast. You always hear people say in the regular season, sometimes it’s a ‘playoff-type atmosphere.’ Eh, you can’t simulate that. You can’t simulate that speed. You can’t simulate what’s going on out there. So today was definitely a good test for some of our younger guys, and like I said, I think they’ll be a lot better, especially in Game 2. And not just them. Even the older guys as well. Some of the guys even with experience, including myself, I can be a lot better as well. So we take it as everybody has to dig deep and not lose two of them on our home floor.”

James has gone dark for the playoffs this season as he has for the past multiple, flipping the switch into playoff mood. Of course, as Kobe Bryant reminds us, however, “flipping the switch” doesn’t mean that LeBron magically becomes even less human than he already is, it means that he just has more time to focus in on one specific team. It’s the opportunity for LeBron and the rest of the Cavs to watch a lot of film, study their opponents’ superstars, and make another crazy run at the NBA Finals.

“‘Flipping the switch’ is just another word for you have one team that you’re focusing on, so you can really zero in on that team,” said Kobe. “That’s all that is. You’re still playing just as hard, you’re doing all the things, but playoffs means if you have one team to focus on, that means you can study all your regular-season matchups against them, you can learn all the information you need to learn to prepare yourself for this playoff series. That’s flipping the switch.”

Can the Cavs make it four consecutive trips to the NBA Finals without Kyrie Irving and the rest of the pieces that were there? Who knows. The Game One loss doesn’t look great, but I still wouldn’t bet against LeBron in any facet.

Hell, you have to go all the way back to the 2010 NBA Finals to find one that LeBron wasn’t in. The man has a way of making it there.

James proved correct and may have something by losing a game in the first round more often as the Cavaliers took a 100-97 win over the Indiana Pacers Wednesday night to tie their series 1-1. He scored the first 13 points of Wednesday’s game along with the first 16 points for the Cavs. The game marked the 1,362nd one of James’ career (combining both regular season and playoffs) along with the most points he has ever scored in the first five minutes.