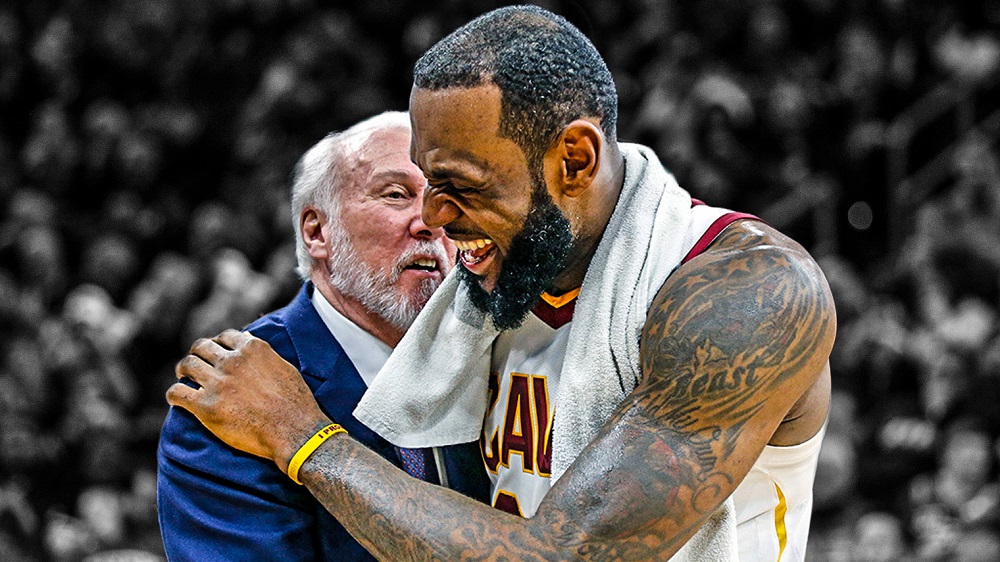 Despite his brash, candor attitude with the press, San Antonio Spurs head coach Gregg Popovich loves to speak his mind when the cameras are rolling, and he isn’t afraid to give his opinion on things outside of basketball.

Sunday, before the Spurs matchup with the new-look Cleveland Cavaliers (which the Spurs won in dominating fashion), Pop weighed in on the recent controversy regarding LeBron James and his political activism outside of basketball.

Recently, Fox News anchor Laura Ingraham said that high-profile NBA players like LeBron should “shut up and dribble” after the superstar’s recent criticism of President Donald Trump. Her remarks, of course, sparked a backlash from the NBA community at large.

Popovich is the latest to defend LeBron, noting his more than a decade in the public eye as a fantastic role model.

“To me, when I heard about that, it was just an unbelievable show of arrogance for a talking head to try and tell someone else if they can speak, what they can speak about, and when and where to do it,” said Popovich. “It’s just ludicrous, but to not have a feel for who this guy is. I mean, think about when he came into public view, how young was he? And to this day, he hasn’t missed a step, he hasn’t fallen off the ledge, and he’s been a brilliant example for millions of kids, especially kids with lesser opportunity [that] haven’t had the same advantages as others. They see in this guy somebody who has consistently exhibited excellence in the workplace and gives them a voice and lets them know that you can speak about anything.”

LeBron has been a well-respected voice for years now regarding things going on around the world; however, he has drawn a significant amount of criticism from those who disagree with him, typically citing his decision to bypass college and go straight to the NBA and his athletic profession as reasons to ignore his opinions.

Whether or not you agree with LeBron, he has a right, just like everyone else in the NBA, and the United States in general, to speak his mind about what’s going on in the world. While sometimes he may get overly political and polarizing, LeBron has used his high-profile status and platform to do a lot of good around the world, especially in the Cleveland and Akron, Ohio, area where he grew up.

And while Pop’s only direct relationship with LeBron is as an assistant coach of the 2004 U.S. Men’s Olympic Basketball Team, the Spurs coach has always been a big supporter. No one really thinks about a LeBron-Popovich rivalry, but the two have faced each other in the NBA Finals three times: once in LeBron’s first stint with the Cavs (and his first trip to the NBA Finals, in which the Spurs swept the Cavaliers 4-0) and twice in a row with the Miami Heat (LeBron took the first one before Popovich, and the Spurs enacted their revenge the following season).

Still, when you think of the great competitors LeBron has faced in his days, Popovich usually isn’t the first that comes to mind, and that is perfectly okay with the San Antonio coach.

“His career is way bigger than he and Pop,” laughed Popovich. “There’s a great respect that goes both ways, for sure. I love the guy. But I guess we’ve both been around for a while and competed a few times, and we’ve each won and lost. But it’s never been an individual sort of thing. He’s always been a team guy, and hopefully, I’m the same way.”

Finally, in the spirit of friendly competition and giving back to the community, Popovich finished by describing LeBron as a fantastic role model for young kids everywhere, especially those growing up in disadvantaged households. Being the pop culture expert and hip young guy that he is, Popovich compared LeBron to the superhero from the new blockbuster film Black Panther.

“It’s kind of like the ‘Black Panther’ movie,” continued Pop. “How cool is that for kids to see that, to have that superhero? Well, LeBron’s been that for a long time. For somebody to be totally numb to that and attack him in such a childish way really speaks more volumes about that individual than it does LeBron. He’s very, very special. We should all be very proud that we have someone like that who’s willing to speak about a variety of topics and you listen to them all.”

To a lot of kids growing up around the world, LeBron James is the closest thing to a real live superhero, so it’s not outlandish for Popovich to make the connection there. That being said, I still have a feeling that Black Panther could probably beat up LeBron.