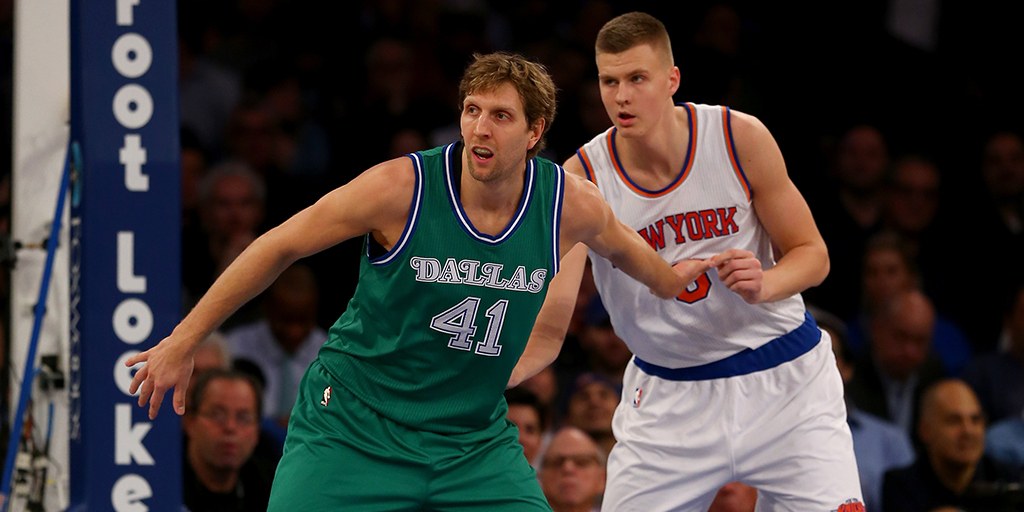 If you asked 100 NBA fans who the best basketball player ever to come out of Europe is, you should get at least 101 saying Dirk Nowitzki. The Dallas Mavericks superstar has long been the most dominant European in the league. Now, if you ask those same people which current European player has the most potential, you should get another 102 saying Kristaps Porzingis.

While the New York Knicks might be the dumpster fire of the NBA right now, Porzingis is their golden child. He’s the only man even attempting to extinguish the flames.

Porzingis is also an outspoken fan of Dirk. Makes sense. That’s the man Porzingis wants to be. He’s matched up with the Dallas Mavericks a few times in his career, of course, but he still hasn’t had the chance to work out with his idol.

KP reiterated his desire to meet up with the playing legend shortly after the All-Star Break this past season.

“I’m sure it will help me out and improve my game, hopefully, unless Mark Cuban says no,” said Porzingis in March. “Dirk is a guy who can really help my game. Hopefully, I’ll have a chance to work with him, a few days to get on the court with him and pick his brain.”

Well, as the NBA continues their Basketball Without Borders tour of Africa, which both 7-foot sharpshooters are participating in, KP and Dirk had the chance to work out together in Johannesburg, South Africa. The experience was everything Porzingis had hoped for and more.

“He said, ‘Whatever question you have, whatever you need, let me know, and if you want to work out during the summer, we can make that happen,’” said Porzingis. “It was really nice of him to give back and to help young players from Europe like me to get to that next level. It meant a lot.”

Porzingis celebrated his 22nd birthday Wednesday, and the very next day he had the chance to work out with his basketball idol. Quite the two-day span for the young star.

It’s not surprising that Dirk was so receptive to Porzingis. After all, there are a lot of similarities between the two players, and Dirk is on his way out, signing a two-year, $10 million deal to stay with the Mavs with a team option for the second year. Nowitzki is making a lot less than most free agents, especially for a man who led the Mavericks to their 2011 NBA Championship over LeBron James and the Miami Heat.

Anyways, Nowitzki seems more than willing to continue to help the young Porzingis grow into the best player he can possibly be. Dirk has also raved about the Latvian in the past, naming him as one of the young players to be excited about last year. 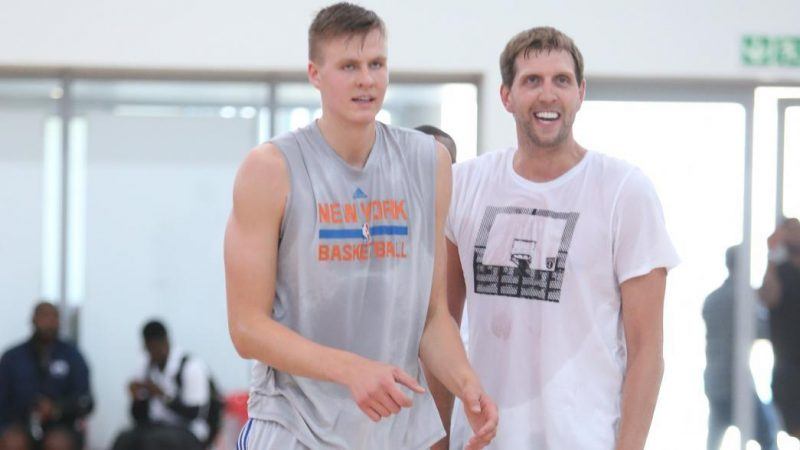 “I love the kid,” said Dirk back in 2016. “I really wanted to train with him over the summer, but it didn’t work out. Hopefully, we can do something next summer…I am a huge fan of his game. Obviously, the sky is the limit for him. He’s got the deep ball. He’s got the in-between game. He is working on his post-ups. He is the real deal.”

The only person who might not be overly stoked about the meeting is Mavericks owner Mark Cuban. The billionaire star of “Shark Tank” expressed his reservations for a work out with the two in the past, seemingly worried that Dirk would make Porzingis too good. Instead, he said Dirk should teach KP to shoot like the 60-year-old.

“F–k no,” said Cuban. “You know how much money I pay Dirk? Unless he teaches him how to shoot like me, then I’ll be really excited about it.”

Of course, when later asked if he was serious, he gave a relatively vague answer.

“Take me literally but not seriously.”

So, Cuban may or may not be happy about their meeting in South Africa. It makes sense why Porzingis had mentioned Cuban’s possible unwillingness as a hindrance in his attempting to work out with Dirk in the past.

So, is Cuban upset?

“Dirk is an adult,” said Cuban. “He didn’t need my permission.”

The idea of Dirk and Porzingis working out together should excite just about everyone except Mr. Cuban. Dirk is an All-Star; an NBA legend. One of the greatest, and certainly the greatest European, of all time. Porzingis is a star in his own right. One of the most exciting young talents in the league. A sort of Dirk reincarnate coming to the NBA as Dirk heads out. And no he gets to learn from the best.

And, Cuban should have nothing to worry about. Even a fully functioning KP can’t overcome the utter dysfunction within the Knicks organization.