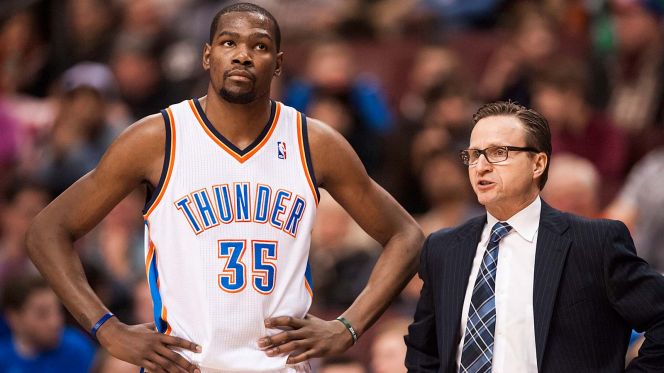 Washington Wizards fans have long dreamed about Kevin Durant, a Washington D.C. native, coming home to the nation’s capital. With Durant’s contract up at the end of the season, people were pointing to this summer as a possible return. Durant has been extremely secretive about his decision; however, it seems he’s not overly ecstatic about a potential return, mainly because of the pressure associated with playing in one’s hometown.

Durant described the Oklahoma City Thunder game in Washington as extremely stressful. Friends and family were demanding tickets and wanting to hang out with him. It was way too much.

It’s not easy to play in the city you grow up in—just ask LeBron James who is constantly criticized for not bringing a championship to Cleveland yet.

This news should be particularly upsetting for the Wizards, who were doing everything possible to lure KD in. They even hired Durant’s former head coach Scott Brooks, who was fired after last season by OKC in a move that KD publicly criticized. Wizards star John Wall doesn’t really care, though. He made it clear to everyone that Brooks was not another bait for Durant.

So Wall seems on board with the new coach, but I’m sure he wouldn’t complain if Durant jumped ship as well.

Nonetheless, Brooks was very successful with the Thunder, including an NBA Finals appearance and a Coach of the Year award.

Durant will make his decision after the playoffs, so let’s hope Wall stops saying “Scotty” in every sentence before then.