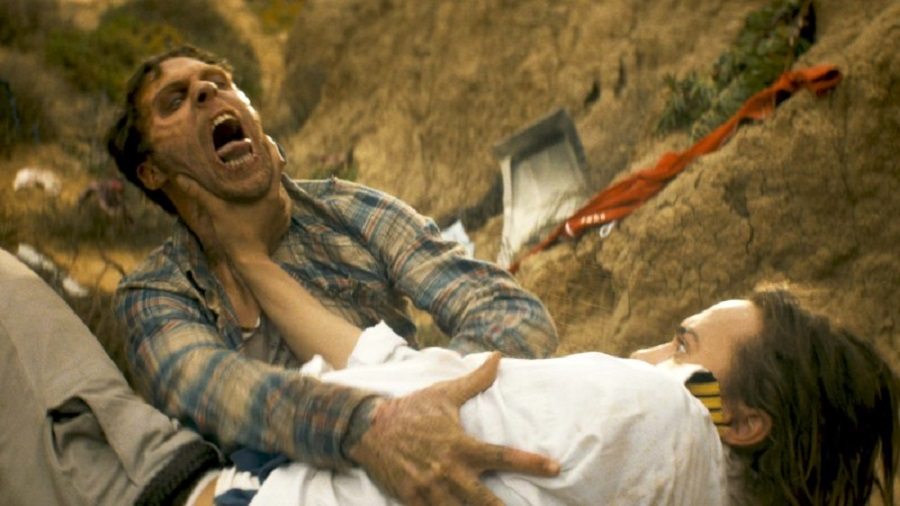 For those who think the title of this week’s episode of “Fear The Walking Dead” means “slow pokes on a beach,” you’re way off. Ouroboros is an ancient symbol showing a snake devouring its own tail.

Pretty clear message as we witness the survivors losing their humanity at the end of the show when they chose to put themselves above a couple new survivors in need of real help.

Humans devouring themselves is part of what makes the virus so deadly. What the sickness doesn’t do directly, it causes nearly as much damage by taking away the normal inclination for people to help one another. The trust that was built over the course of centuries is all but gone.

This week the series connected with the short video series of Flight 462 that AMC ran in the off-season. A young woman named Alex is in a life raft with a badly injured guy and two others. She kills one who tries to snuff out the hurt man. Then later presumably has to do the same to the redhead who ended up clogging the cooling system on the Abigail.

Travis is not a great repairman, but he’s all they have. So he goes Scuba Steve to see what’s jacking up the engine coolers. The red headed floater is the issue, and it’s a filthy all day job. Strand is pissed but has no choice but wait it out.

Since the ship is disabled, the youngsters think it’s a good idea to hit the beach “yard sale” that resulted from the plane crash. 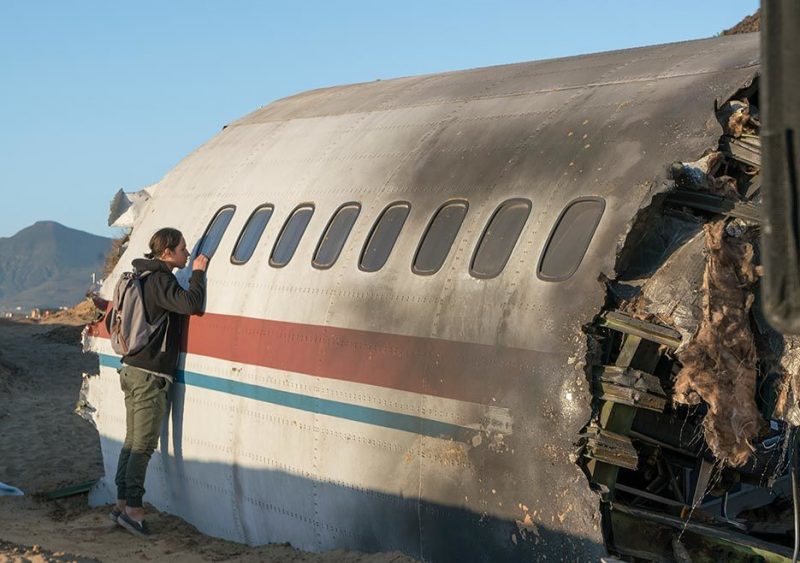 They sure do need supplies so this is a good idea and Daniel goes to make sure everything is OK. He says they will be quick about it….an in and out mission.

Turns out, Daniel is the worst chaperone in history and these kids are the slowest bunch ever. Instead of a frenzied scavenger hunt for medicine and other essentials, they end up milling around the wreckage endlessly. I was amazed none of them took time to do some sunbathing.

Chris is just looking for trouble as he wanders off under the careless watch of Daniel. Chris finds the trouble he sought and gets to pound in a walker’s head. More therapy for him.

He then has to whack a guy who is not quite dead.

Not so much fun with that one. The mercy killing went pretty poorly with the man not going out easily with the first blow to the dome.

While the slowpokes on the beach play dress up, Strand is telling Maddie about the real destination in Mexico. She isn’t sure about this so-called fortress home, but tells Travis they have no choice but trust him.

Travis is bent and doesn’t trust Strand, but what can he do? No one else can operate the ship. If so, they would have taken Strand out by now. Travis is probably just irritated that his morning romp with Maddie got interrupted with a zombie arm in the engine system.

All the slow poking and reckless actions on the beach finally cost the group. Chris thought it was pretty cool looking at the half Walker being chewed on by the little crabs. Then the cool factor wore off when the dumb-ass junkie fell off the ledge right beside the poor undead fellow. 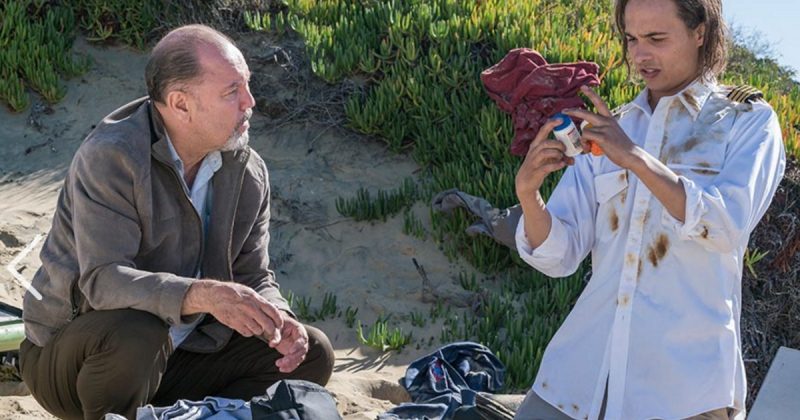 Chris managed to kill the zombie then another one toppled on him from above. He ended up living of course and had enough guts and blood on him to camouflage himself like we’ve seen on the original series.

The guy is fearless or just doesn’t care much about his own life. Alicia watches as he stares face to face with one of the many Walkers who are now cascading onto the beach area.

Alex from the raft ends up with Daniel, and they all fight off the plane crash non-survivors, then they all make it back to the dingy. Once the group arrives back at the Abigail, Strand doesn’t want the two new additions on board of course.

Alex can’t believe there is even a debate going on among humans about whether to help her and her burnt friend.

This is the new world girl. Get familiar.

The two newbies are not allowed onto the ship, but will be given food and water. They will be shamefully towed in their ghetto raft behind a million dollar yacht.

That was not the best situation and would be hard to swallow, but at least they were safe for the moment and did have food and water.

That moment was pretty damn brief. Stand came out and cut the raft loose once everyone else was asleep except Maddie. She protested but did little to stop it.

Alex looked to be a formidable character so maybe we’ve not seen the last of her. Surely she didn’t make it all the way through the short video series to end up lost at sea with shark bait guy stinking up her little raft.

We’ll see what Alex’s fate is next week maybe. It’s possible Maddie will do something to help, but it looks like she’s resided to the fact that they can only help so many people.

And judging by the characters’ dumb actions this week, the core group will be lucky to save themselves.