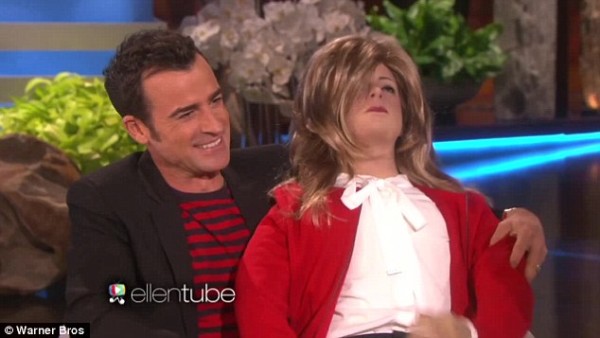 Normally, newlywed Justin Theroux is relatively private when it comes to his relationship with wife, Jennifer Aniston. However, as a guest on Wednesday’s episode of Ellen, Justin decided to spill some of the details of his life as a married man.

After a three-year engagement, Justin, 45, married Jennifer, 46, in a top-secret backyard wedding at their home in Los Angeles in August. The wedding was officiated by late-night talk show host Jimmy Kimmel and was a star-studded event including guests such as Howard Stern, Emily Blunt and of course, Ellen and her wife, Portia.

In his interview with Ellen, Justin explains, “the first couple days of [marriage], t’s a great feeling. ‘Fiancé,’ after a while, sounds cute at first…then, you get to say, ‘my wife.’”

Justin also opened about telling his guests that they were coming to a birthday party. Justin revealed, “Well it was actually a massive miscalculation. Because we thought, like, we’re going to tell some people this and some people that and then people that really have to that have busy schedules and whatever. So then afterwards, we kind of realized, like, that was a terrible plan, because your basically telling half your guests, ‘You’re unemployed and we can’t trust you,’ which was of course not the cast.” He went on to say, “There were people there who were just in jeans. We also have friends who, when we’ve done barbeques and stuff, show up, like, dressed to the nines, like, ‘This is the [wedding] right?’ and we’re like, ‘No, this is actually a barbeque!”

In the latest edition of Redbook, model, Project Runway judge, and America’s Got Talent host Heidi Klum opens up about juggling her work life and home life as a mother of 4 kids.

After finalizing her divorce with ex-husband Seal in October 2014, Heidi found herself taking on a lot more responsibility when it came to taking care of her 4 children: Leni, 11, Lou, 6, Henry, 10, and Johan, 8.

In the interview, Heidi opened up about her thoughts on women and their ability to multitask, saying, “Women are capable of juggling a lot of balls – we do things that guys cannot do. Men typically can juggle only one ball, and even then they’re like, ‘I’m confused. Should I put it in my right or left hand? A lot of them have a very hard time just trying to figure out what to do with that one ball. And often they want us to hold that one, too!”

In terms of sharing custody of her kids with Seal, Heidi explained, “Obviously things have changed, but they haven’t changed drastically. [Seal] was never your typical dad who left for work in the morning with his briefcase and would be home by dinnertime every night…He traveled a lot. The kids knew it was part of his job. I’m a mom and a dad at the same time.”