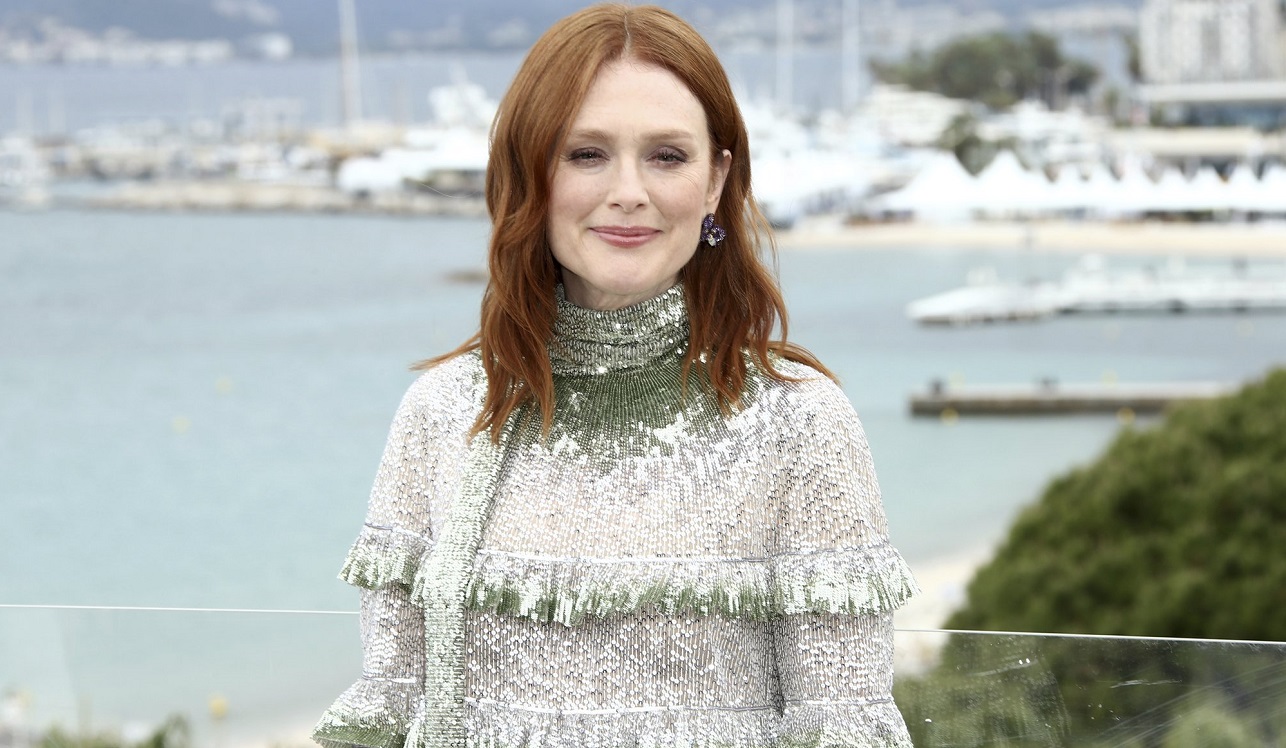 Julianne Moore is one actress who isn’t afraid of sharing her opinion on everything from fashion, whatever movie she’s hawking (in this case, it’s “The Staggering Girl” at the 72nd Cannes Film Festival or the need for industry quotes in film. You name the topic, and she’ll always have a thoughtful and well thought out answer.

One of Julianne Moore’s first thoughts after signing on to the Valentino-adorned short film “The Staggering Girl” was wardrobe.

She had visions of wearing green, lavender and red haute couture as the star of the short film produced by the French fashion house.

“And I got there and they’re like, ‘These are, this is your wardrobe.’ And I was the only one in the movie without any color. Because that was kind of, that was the story we were telling. I was like, ‘What? What? I came all this way and I don’t get to wear lavender?’”

Moore, who plays Italian American writer Francesca in the 37-minute film, told reporters she’s always been interested in “the fact that we feel compelled as human beings to decorate our bodies and our surroundings.”

“It’s like this idea that we’ve chosen this because it pleases us, or we’re trying to say something consciously or unconsciously,” said the 58-year-old Moore.

Her fascination goes way back, to a particular purchase when she was a 17-year-old living with her family on a U.S. Army base in Germany. She saved up her money for a dress to wear to a dance, but her mother told her no black.

“She said it was too sophisticated for a young girl, so I took my money, I took my 80 marks, and I bought a black dress,” Moore smiled. “And I said to my mom, ‘You can’t say anything about it because it’s my own money.’ It was terrible. And of course as a mother of a 17-year-old now I think like, ‘Oh I can’t believe that I did that,’ but it was a really exhilarating moment for me.”

The film’s director, Luca Guadagnino, collaborated on the film with Valentino designer Pierpaolo Piccioli. It’s based on a screenplay by Michael Mitnick.

Julianne Moore said Wednesday that larger efforts are needed in order for the movie industry to reach gender parity, and that means implementing quotas.

“We will not have gender parity unless everybody is cooperating. Women are not a special interest group. We’re 52 percent of the global population,” Moore said during an event at the Cannes Film Festival. “In order to restore the balance, I do think that there will be, that we will need some measures to change our culture.”

“We will have to make major changes to reach parity. That’s just a fact. So, I do believe in quotas. I really do,” added Moore. “I believe in trying to level the playing field for everybody regardless of their gender or their culture or ethnicity. You have to open doors.”

While gender quotas haven’t been much discussed in Hollywood, they’re more common in Europe where filmmaking is often partly supported by public money. Sweden, Norway and Ireland have instituted 50-50 quotas in allocating public funds for male and female filmmakers, as has the British Film Institute.

Women made up 8% of directors on the top 250 films at the U.S. box office last year, down from 11 percent the year before, according to a study in January from San Diego State University’s Center for the Study of Women in Television and Film.

Moore spoke Wednesday at a Mastercard MasterClass event alongside Werner Herzog and Xavier Dolan. In Cannes, she stars in the short film “The Staggering Girl” directed by Luca Guadagnino, which is playing in the Directors’ Fortnight section.