Home All News Celebrity Gossip Jimmy Page talks Led Zeppelin, enduring and being on display at the... 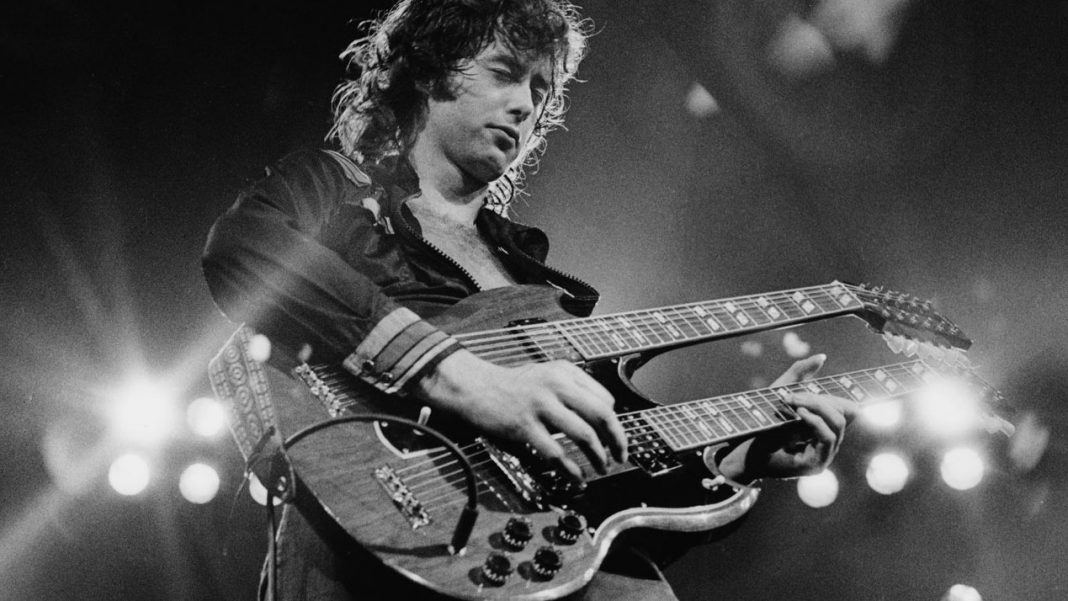 The great thing about living in New York is being able to drop everything when you get the call that you get to interview a rock legend like Jimmy Page. It’s one of those moments you dreamt about as a kid listening to their albums while everyone else was listening to The Smiths, Quiet Riot and The Dead Kennedy’s. I listened to all those too, but I always found myself coming back to them which has continued throughout my adult years.

With Led Zeppelin’s 50th Anniversary this year, there has been plenty to look forward to including the new documentary from Bernard McMahon that will be spotlighted at the 72nd Cannes Film Festival. It’s still untitled and in post-production, but it marks the first time that members of the legendary band have participated in a documentary about themselves. The doc tells the Zeppelin story exclusively through new and archival interviews with members, Jimmy Page, Robert Plant, John Paul Jones, and the late John Bonham.

“When I saw everything Bernard had done both visually and sonically on the remarkable achievement that is ‘American Epic,’ I knew he would be qualified to tell our story,” Page said. “Seeing [blues musician] Will Shade, and so many other important early American musicians, brought to life on the big screen in ‘American Epic’ inspired me to contribute to a very interesting and exciting story.”

In April, Jason Bonham, son of Led Zeppelin drummer John Bonham recounted a controversial story on The Howard Stern Show about Page giving him cocaine for the first time when he was 16.

“We got called to his room and there was a woman on the floor with a collar on, meowing, and he had this grinder thing and he turned it over and he went, ‘Here you go,’ and I went, ‘Thanks,” Bonham said during the show (per Rolling Stone). “He’s like, ‘You’ve done this before, right?’ And I’m like, ‘Yeah, of course I have.’ So he handed it over and I just did all of it, and he went, ‘Just like your father — y’know, that was supposed to be for all of us.’”

Well, Jason Bonham needs you to know that this absolutely, positively did not happen. In a statement posted on his official website, Bonham writes an apology:

On or about 9 April 2019 I, Jason Bonham, gave an interview on radio with Howard Stern (the Interview). In that interview I made certain untrue and derogatory statements concerning Mr. James Page (aka Jimmy Page) of the legendary band Led Zeppelin.

I unconditionally retract all derogatory and defamatory comments relating to Mr. J Page that I made in that interview. In particular it is wholly untrue that Mr. J Page offered me any illegal substances either when I was a minor or at all. I apologize to Mr. Page, unreservedly, for making these unfounded and untrue comments about him. Out of my long held respect for Mr. Page I will make no further comments on the Interview and I agree to make no further comments which Mr. Page might view as disparaging, either now or in the future.

I mentioned this to Page, but he shook his head to signal that it wasn’t something he felt a need to comment in so rather than live in that past, we moved on to a much more interesting past…

When Page was a young student, he had already developed such an inseparable relationship with his guitar that school officials would often confiscate it.

“It would be given back at the end of the day. And this was quite repetitive,” Page said.

That dedication worked out pretty well for Page, who took Led Zeppelin to the zenith as one of the most powerful outfits in rock history.

Now some of the instruments that he used to create that Zeppelin sound are on display at an exhibition called “Play It Loud: Instruments of Rock & Roll” at the Metropolitan Museum of Art in New York. It is currently open now through October 1, 2019.

Seven of Page’s guitars, a few costumes and some of his equipment have been loaned to the exhibit, alongside dozens of guitars, drums and memorabilia from such legends as Chuck Berry, Jerry Lee Lewis, Bo Diddley and John Lennon.

While visiting the exhibition, Page sat down with Movie TV Tech Geeks to discuss the band’s legacy, why its music has endured and prospects for another reunion concert.

Have you gotten tired of all the Led Zeppelin reunion questions? You weren’t completely happy with Live Aid or the 40th anniversary concert for Atlantic Records in 1988. What about the 2007 concert in London?

Page: I’m rather pleased that we did it, because we sort of looked still similar to what we looked now, and, yeah, we did a really good job. But I don’t think there’s going to be another one.

What is your earliest recollection with the guitar.

Page: I was taking my guitar to school so that I could play at recess because I became so involved with it, we became inseparable. I had to do my academic studies, that was the deal I had with my dad. And the rest of the time I could play guitar. So, I took that one step further: I would take that to school and play at recess.

Page: I’d like to think that it was, because the first album, I sort of knew, as we were doing the tracks, exactly how I was going to layer everything and the textures of them…. There’s a variety of moods on ‘Led Zeppelin I.’ So, again, it was me challenging and pushing as far as I possibly could, not even thinking of my limitations, just going beyond, beyond, beyond.

How does it feel seeing your guitars in display at the Met?

Page: You approach the gallery through Greco-Roman statues, and then the first thing you see is Chuck Berry’s guitar. I said, ‘What? The original one, the blond one,’ and they said, ‘Yes.’ And I said, ‘What would you like? Tell me what you want to help this along and you can have whatever it is that you want.’

Your Sovereign Harmony acoustic guitar is one that you donated to be on display. How important a role did that one play in your career.

What do you think has kept Led Zeppelin catalogue alive for all this time?

Page: It approaches so many different styles and moods and it’s very passionate. And it also very gentle. And it’s very hard. And it’s extremely dynamic. If anybody wants to be playing the guitar, the harmonica, the drums, the bass, the keyboards — well, it’s all there. And it’s organic music where everyone is playing together. I think it’s a great legacy to have produced, to be honest.