Home Interviews Jensen Ackles Soldiering On With ‘The Boys’ Season 3 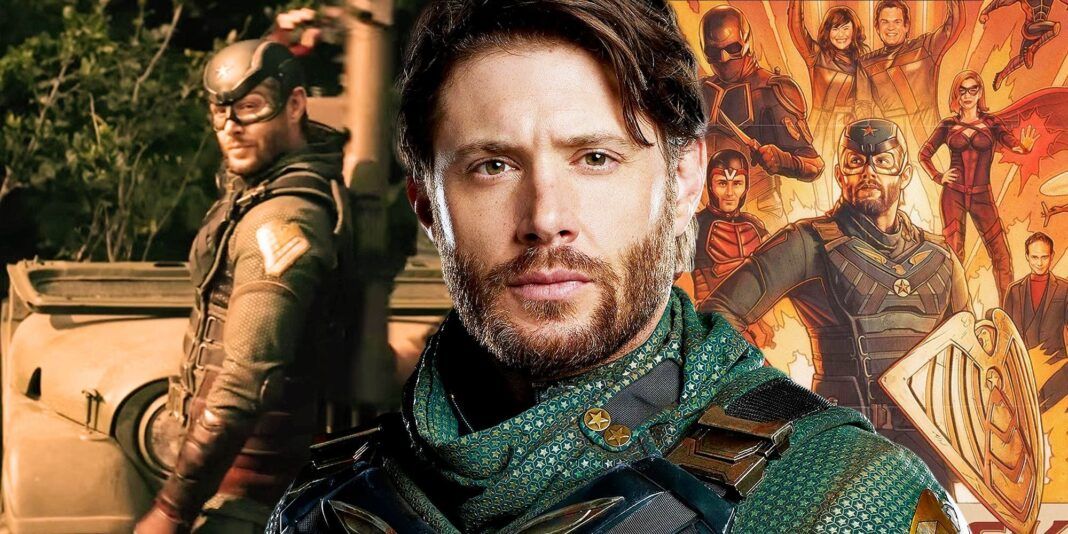 I had a lovely chat with “The Boys” Soldier Boy himself this afternoon, aka Jensen Ackles. Mostly I wanted to delve deep into understanding his new character on “The Boys” for its third season, and that part of the interview will have to wait until it’s not so spoilery, but we also had time to reminisce a little about his last show (and my favorite show of all time),” Supernatural,” and how working on “The Boys” was both different and similar.

When you watch a show for 15 years like I did “Supernatural,” you get pretty familiar with your favorite character (that would be Dean Winchester) and the way in which an actor portrays him (that would be Jensen). I used to play a game where I’d try to figure out what lines were ad-libbed, since that happened a fair amount on “Supernatural”. They were inevitably some of my favorite lines. According to Ackles, my track record was pretty good. Soldier Boy, on the other hand, is a brand new character. I don’t really “know” him that well, so it’s harder to pick out those improvised moments. I asked Jensen if he could think of any examples off the top of his head.

Jensen Ackles: There were some, I’m trying to think – I just watched the whole season through this weekend.

Me too, Jensen. It was a bloody wild ride!

Jensen: There wasn’t a whole lot of room for that though, given the character and given the type of scenes we were filming.  I know like all of the stuff that we did, like the PSA that got ‘leaked’, that was just me and Phil (Sgriccia) messing around.

Me: I totally should have called that one.

This your Captain, America? pic.twitter.com/1eYAcGK71L

Sgriccia has directed on many of Eric Kripke’s shows, including being a long-time director on “Supernatural.” I once had the great privilege of being on set when he was directing and sitting behind him to watch. (Jensen introduced him as “the man, the myth, the legend” and believe me, I didn’t need to be reminded to be in awe! In fact, I guess I was more or less frozen in silence so as not to interfere with filming, because eventually Phil turned around in his chair and exclaimed, “you are the quietest person I’ve ever met!” Which, I am NOT – but it was Phil Sgriccia!)

That PSA has Ackles ad-lib written all over it. No wonder I love it so much.

I also asked him what it was like being “the new guy” on set after having experienced the Supernatural set for fifteen seasons, with a cast and crew who were essentially family after all that time.

Me: It was a special set.

Jensen: Yeah, it was. And you know, this was fun for me. It wasn’t basically being the co-leader of a set for fifteen years, and it was kinda interesting – almost refreshing – to be the guest on somebody else’s set. Being the guest at the dinner table. And it was nice to kinda sit back and watch somebody else lead and set the tone for that set. I think Karl does an amazing job, Ant does an amazing job, they are all really great – not just at portraying their characters, but also providing a really healthy fun and creative space to make the show. So it was nice to kinda plug myself in.

Me: You can tell that you all got along well. Even the interaction in the press interviews and the way everyone can tease each other. It seems like it worked out really well.

Jensen: It’s great and I had a lot of fun and again, like everybody who I was working with, they just brought it. It’s a different level. I felt like it was the same great energy level that I was so used to on “Supernatural,” but on a much bigger stage.

He is definitely right about both the energy level and the size of the stage – don’t miss Season 3 of “The Boys,” premiering June 3 on Prime Video. Stay tuned for more about “The Boys” and more from Jensen!