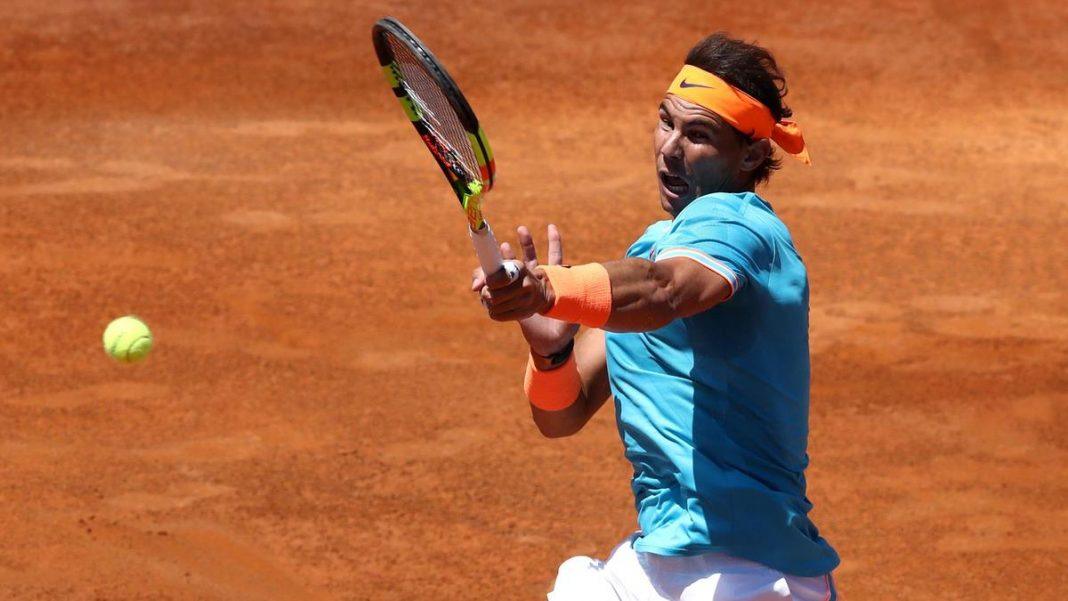 Roger Federer and top-ranked Naomi Osaka withdrew before their Italian Open quarterfinals because of injuries on Friday.

Federer reported a right leg injury ahead of his match against Stefanos Tsitsipas, while Osaka said her right hand was injured before she was to play Kiki Bertens.

Federer and Osaka both won two matches on Thursday after play was backed up due to rain a day earlier.

While Osaka won both of her matches in straight sets, Federer had to labor for more than 2 ½ hours to overcome Borna Coric in his second time on court.

“I am disappointed that I will not be able to compete today. I am not 100 percent physically and, after consultation with my team, it was determined that I not play,” Federer said. “Rome has always been one of my favorite cities to visit and I hope to be back next year.”

It’s only the fourth time in Federer’s career he has had a walkover loss, the ATP Tour said, adding the 20-time Grand Slam champion has never retired in 1,465 matches.

Federer was not originally planning to play in Rome but he changed his schedule last week, saying he would rather play matches than practice ahead of the French Open, which starts in nine days.

Federer and Nadal could have clashed for a 39th time in the semis, but this marks the second time this season that an injury to one of them has prevented the showdown.

In March, Nadal pulled out of an Indian Wells semifinal encounter with Federer due to a knee injury.

Nadal leads Federer 23-15 all time but Federer has won the last five. Nadal has not beaten Federer since the 2014 Australian Open semifinals.

Federer, 37, played and won two matches in Rome on Thursday due to weather. He beat Joao Sousa in straight sets before needing three grueling sets to take out Borna Coric.

Nadal, meantime, had dropped just six games in six sets entering the semifinals. He has won three sets at love.

Nadal, who has yet to win a title in 2019, could face Djokovic in the final. The Serb was set to face Juan Martin del Potro in the quarters on Friday.

The French Open begins May 26 and Nadal will be seeking his 12th title at the clay court Grand Slam. Djokovic has won the last three Grand Slam titles and will be seeking to hold all four at once for the second time in his career.

Federer is slated to play Roland Garros for the first time since 2015. His only title there came in 2009.

Tsitsipas and Bertens advanced to the semifinals via walkover.

Osaka couldn’t immediately say how serious the injury was, or if it will affect her status for Roland Garros. She was yet to see a doctor but when she held her hand up for reporters to see it was clearly swollen.

“I woke up this morning and couldn’t really move my thumb,” Osaka said. “I tried to practice and grip my racket but I couldn’t, and I kept feeling this pain when I tried to move my hand in different directions.”

Osaka’s win on Thursday guaranteed that she will remain No. 1 going into the French Open.

“I didn’t feel anything yesterday. That’s why I’m kind of confused right now because I literally woke up in the morning and couldn’t move my thumb,” Osaka said. “So I was like, ‘Maybe I slept on it and maybe it will go away.’ But it didn’t.”

Bertens, who won the Madrid Open last week, will face Marketa Vondrousova or Johanna Konta for a spot in the final.

The quarterfinals in the other half of the draw feature former No. 1 Victoria Azarenka against Karolina Pliskova, and Kristina Mladenovic against Maria Sakkari in a matchup of two qualifiers.

The other men’s quarterfinals are top-ranked Novak Djokovic against Juan Martin del Potro, and Kei Nishikori against Diego Schwartzman.

Osaka also withdrew before a semifinal in Stuttgart, Germany, last month due to an abdominal injury. And she retired from her previous meeting with Bertens at last year’s WTA Finals with a leg injury.

Will Federer Face Off With Rafael Nadal At French Open?

Federer is competing on clay for the first time in three years.

At 37 years old, the world No 3 wants one final shot at toppling Nadal on his favorite surface.

He complained about his right leg and toe after sliding during his victory against Borna Coric.

Federer was due to play Stefanos Tsitsipas in the quarter-finals today before he pulled out of the tournament.

The Italian Open released a statement which read: “Unfortunately, King Roger had to withdraw from the tournament due to an injury to his right leg.

“We wish him a fast recovery. Thank you for the incredible emotions.”

Supporters are now worried Federer may not make it to Roland Garros at the end of the month.

There has been no word from the 20-time Grand Slam winner on the severity of the problem since withdrawing from the Rome event.

But he did speak about the issue after his victory against Coric.

“I don’t quite understand how players just go with it when they water the court,” Federer said.

“Players kind of check the lines and are like ‘ok we can play’.

“The lines are wet. Wet playing lines mean you slide. When I slid I hurt myself.

“I did hurt my toe for two games and my leg was also hurting a little bit. I just don’t understand. They don’t make us play but they should call time.

“They make us stand there and feel the pressure from 10,000 people and a live audience.

“The player will always cave in the end.”

Defending champion Rafael Nadal swept past fellow Spaniard Fernando Verdasco to book his place in the semi-finals of the Italian Open on Friday.

The eight-time Rome champion came through 6-4, 6-0 in 1hr 38min to set up a clash with Greek eighth seed Stefanos Tsitsipas for a place in the final.

He’s conceded only six games in six sets at the Foro Italico, but he’s reached the semifinals.

Nadal has fallen in the semifinals of his last three tournaments — all on his favored clay. And next up is Stefanos Tsitsipas, whom Nadal lost to in Madrid last week.

“I know what happened last week, and I (am) going to try to do it better tomorrow,” Nadal said. “I have to hold the level or increase a little bit more. If that happens, I (am) going to have my chances. The good thing is during the last month my feeling is every week was better than the previous one.”

“Every year, we make (a) prediction with the team which player is going to be at the top 10 at the end of the season,” Nadal said. “I put Tsitsipas there. … He started even better than what I (expected). He deserves to be where he is now.”

Roger Federer‘s withdrawal with a right leg injury earlier in the day had handed Tsitsipas a ticket to the last four.

The 32-year-old Nadal, seeded second, is bidding for his first clay-court title this season before chasing a 12th French Open crown at Roland Garros starting on May 26.