Home All News Celebrity Gossip The Irony Of President Barack Obama’s ‘Nigger’: For the Record 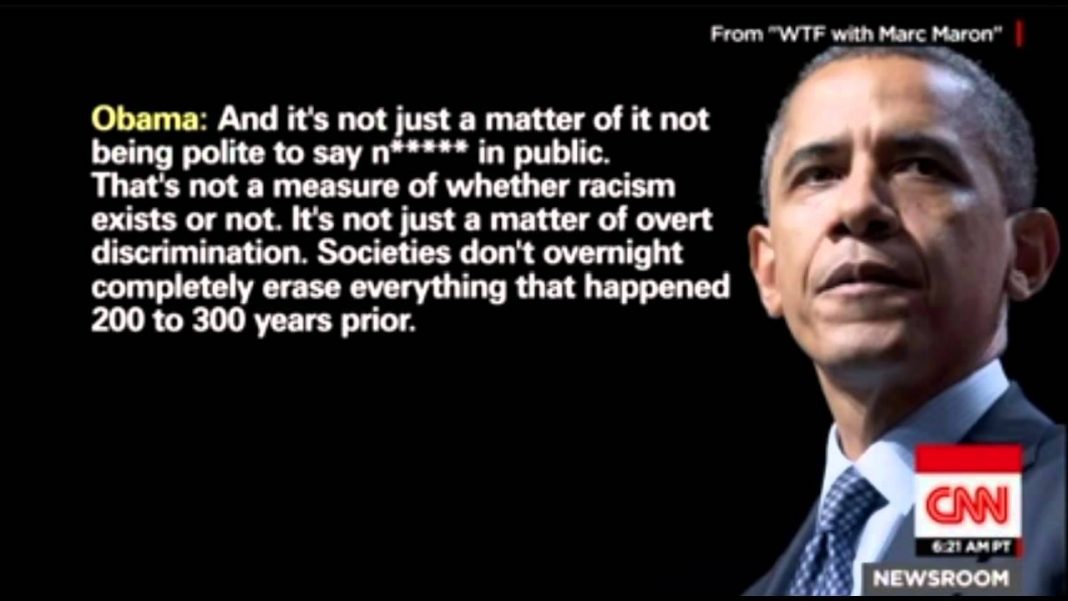 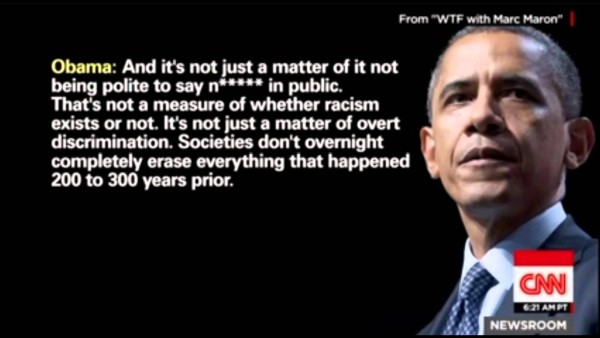 This week’s For the Record, I’m talking about something that, once again, I cannot help but add my two cents in order to shed some light on the situation. Yes, I consider myself a giver of understanding, a clearer upper of the bullshit, a poet of sane thinking… and here I go.

So here is the thing with President Barack Obama saying the word nigger on the Marc Maron show – he has every right to because he is black. Plain and simple. There is no way around it. I know that may seem kind of elementary and even invalid, but at the root of it, black people use the word and so it is not something we make a big deal about. Yes there are those who wanted to have a funeral for the word and want to vanish it from the English language, but that’s not going to happen… ever…. And I don’t quite get why someone would even still be on that soapbox. 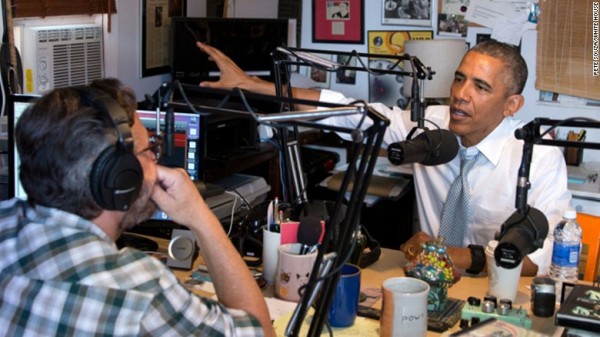 Now, I don’t see President Obama walking around in his every day life just saying nigga like rappers or us common black folk, but his dropping the “n-word” in an interview the way in which he did should NOT have garnered the reaction it did.

And let’s talk about the way he used it. See, when I first heard about him saying the word, I was like “oh damn, he done gone hood on em,” but after hearing the comment in question, it is clear that people are overreacting. The overreaction, MOSTLY by individuals who would get more than a side eye if they used the word, is just another way in which those who don’t like, oppose and downright hate President Obama to further spew their disdain for him.

I didn’t have a problem with him saying it obviously because he was using it in a conversation as an example to support his point that racism is still an issue in America today. To keep it really real, the very fact that “certain people” take issue to him saying it further supports his point that racism is by no means gone. What, are they upset that the president gets a pass to say it and they don’t? Are they upset that he used it to describe a mindset that they secretly embrace when they are with their friends in the privacy of their gatherings, events, conversations and homes? I just don’t get the outrage. It’s not like he said, “ Racism is still alive and niggas ain’t having it.” I can see one’s consternation with that, but that’s not the case.

To be clear, I know that white people (the “certain people”) are not the only ones who are crying about his usage of the word. There are some black people who feel that it was inappropriate. But we have to really be honest here. President Obama said it in reference to the derogatory meaning it personified during a much darker time in America. We are all away of the fact that the term DOES mean different things depending on who’s saying it. There is no question about that and anyone who denies it is just doing so for arguments sake.

President Obama did nothing wrong in using it. All of this is telling to the state of racial tension in the country. I wish to God we could get past it all. It baffles me that the color of a person’s skin can cause another person to loathe them. How does that even work?

People need to stop feeling the need to make mountains out of molehills. Always fishing and reaching for something to project on black people of influence. It takes away a certain sense of credibility when black leaders are treated the way Obama is treated. I mean come on, he is the fucking president of the United States. Don’t you think he was more than aware that using the word just might have the reaction it did? Bill O Riley can call every black person regardless of what they are doing a thug or menace and that only adds to his  ‘credibility.”

President Obama can’t get a break. I mean, with people thinking that it’s okay to heckle him as he speaks and all. He gets no love. But hey, that’s what happens when you are the most powerful man in the world, right?