What makes a good spy film of TV series? There’s action, suspense, secrets and intrigue and the latest Marvel’s Agents of SHIELD has all that. Spoiler alert for anyone who has yet to see this episode. SHIELD has really gone a long way from season 1’s mission of the week format. This episode is designed to keep the viewer updated on the show’s several story lines. The trailer alone makes it interesting enough, and the synopsis of betrayal makes it more so.

Last we saw agent May, she’s still with AIDA 2.0 and Doctor Radcliffe. They discussed about how to keep May sedated as their ‘simulation’ didn’t seem to work. Their first simulation was described as a calming scenario which May woke up from. Radcliffe decided to change it as May’s warrior personality rejects calm. This episode now shows up what’s been happening inside May’s head. It first shows us the calming scenario with May waking up inside a massage parlor or spa getting ready for a massage. It’s much like Coulson’s TAHITI scenario, except it’s indoors with a largely-built guy doing the massage. Deep inside, May knows something is up and rejects the massage but after doing so wakes up from the same bed and then confronted by the same guy over and over until she decides to punch the guy, leading her to wake up to her escape attempt in the previous episode.

The show begins on the part where Radcliffe and AIDA capture May and as many suspects was the time AIDA was to be chauffeured by May back to SHIELD to read the Darkhold. Radcliffe and AIDA discuss their next steps beside an unconscious May with AIDA insisting that May be disposed of since LMD May seemed pretty entrenched within SHIELD. Radcliffe maintains his anti-lethal stance and argues that the real May is insurance and that there’s a second LMD in the mix, meaning that LMD May isn’t the only LMD out in the wild. His statement now puts an aura of suspense for the rest of the show. Who is the second LMD? It’s reminiscent of John Carpenter’s The Thing, and some of the episode’s dialog suggests that things aren’t as they seem, plus that little blurb in the synopsis. The audience is then left to wonder the identity of the second LMD and how it was integrated. Is it Fitz whose actions seemed very off (but we know it’s about AIDA 1.0’s head). Is it Gemma? Is it Yo-yo or Mack? Is it Talbot? Is it Mace? 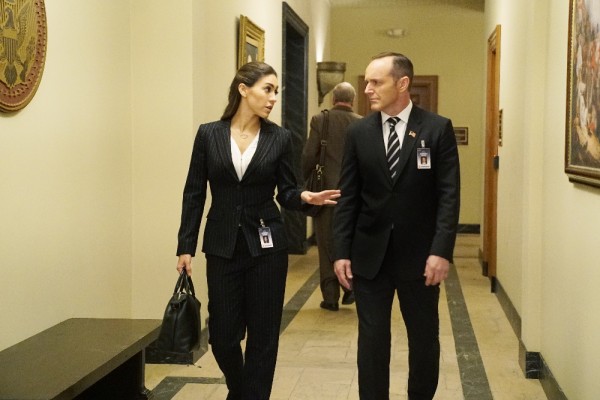 The spy/traitor thing comes to a head when Coulson and Yo-yo sneak into Senator Nadeer’s office to set bugs during Quake’s hearing for her ‘crimes’ when she went rogue. The hearing is presided by Senator Nadeer herself. Yo-yo triggers a booby trap designed for her which draws the attention of Nadeer’s security. Coulson and Yo-yo are captured and even presented at the hearing publicly embarrassing Talbot and SHIELD. Coulson deduces that there’s a spy within SHIELD with intimate knowledge of their mission. As for LMD May which would be the usual suspect, she’s with Gemma the whole time monitoring the situation. She maintains her cover even after discovering that she’s something else in the previous episode. In a past scene, she confronts Radcliffe but is incapable of harming him nor is she able to out herself as an LMD. See? We’re not spoiling everything. Feel free to watch everything in sequence later if you haven’t seen the episode already.

Back at Radcliffe’s, while monitoring May, AIDA accidentally tips over a beaker of cotton swabs from a table full of lab containers besides May and leaves, perhaps to get a cleaning tool. May wakes up, reaches for an empty beaker and breaks one for a shard to cut herself free. May escapes and fights AIDA, slows her down and goes up the building with AIDA giving chase. They finally fight each other on the top floor with May seemingly victorious and throwing AIDA out a balcony. But AIDA’s body vanishes in a sea of pixels. May is then confronted by another AIDA behind her who reveals that everything was a simulation. It was Radcliffe’s new scenario to keep May’s mind busy and that May’s already been through the dog and pony show several times getting better with each iteration, making it necessary for Radcliffe to cook up a new one.

Meanwhile, Fitz, through AIDA’s head discovers Radcliffe’s plans, (but still unaware about LMD May) and has him arrested and incarcerated within SHIELD’s base. When Fitz confronts him, he discovers something odd, grabs a gun and shoots Radcliffe in the head. It turns out that Radcliffe was an LMD.

The real Radcliffe was busy monitoring what’s happening through LMD May and it was him who tipped off Senator Nadeer. The traitor thing was clickbait since Radcliffe’s been a traitor since the previous two episodes. As with the premise of having a traitor in the midst, this breaks up the team’s solidarity which in this case, is the working relationship between Coulson, Mace and Talbot; as Coulson accuses Talbot of tipping off Nadeer. Talbot counters that he’s the only reason SHIELD is back in the public’s good graces.

At the end of the episode, Radcliffe made arrangements with Senator Nadeer due to his precarious situation in SHIELD but to be really inducted into Nadeer’s group, Radcliffe needs to meet with the ‘Superior.’ May meanwhile is thrust into a new scenario designed to mess with her reality. Her experience in Bahrain as ‘The Cavalry’ but with a different outcome where she saves the little girl and kills the girl’s inhuman mother. 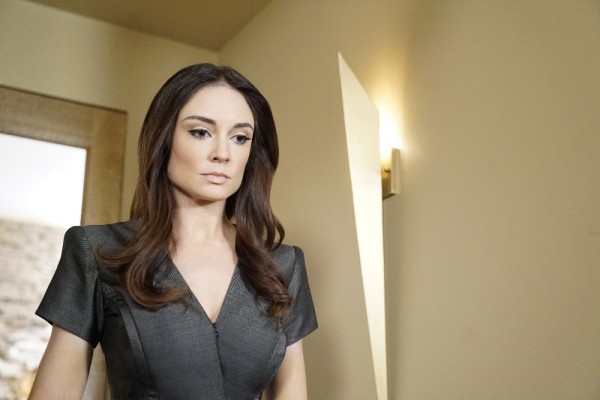 The episode is quite effective as a spy thriller as it’s designed to mess with our heads for a bit. Keeping the audience guessing for a traitor and leading us to believe that May’s capture finally gets resolved only to tell us that it’s all in May’s head. Another suspenseful tidbit is the identity of Nadeer’s superior at the end and that AIDA remains a psychotic wildcard for Radcliffe. Much like VIKI in I-Robot, AIDA remains conflicted in following her understanding of the greater good against her creator’s orders which will make AIDA very dangerous in the next few episodes. Also, due to Radcliffe and Nadeer’s machinations, SHIELD is once again fractured, and we’ll just have to wait for the next episode to see what Coulson and team can do about it. Quake and Mace don’t get to do much in this episode, but it managed to juggle most of the characters nicely. It’s a team show, and everyone has a part to play and play nicely they did.