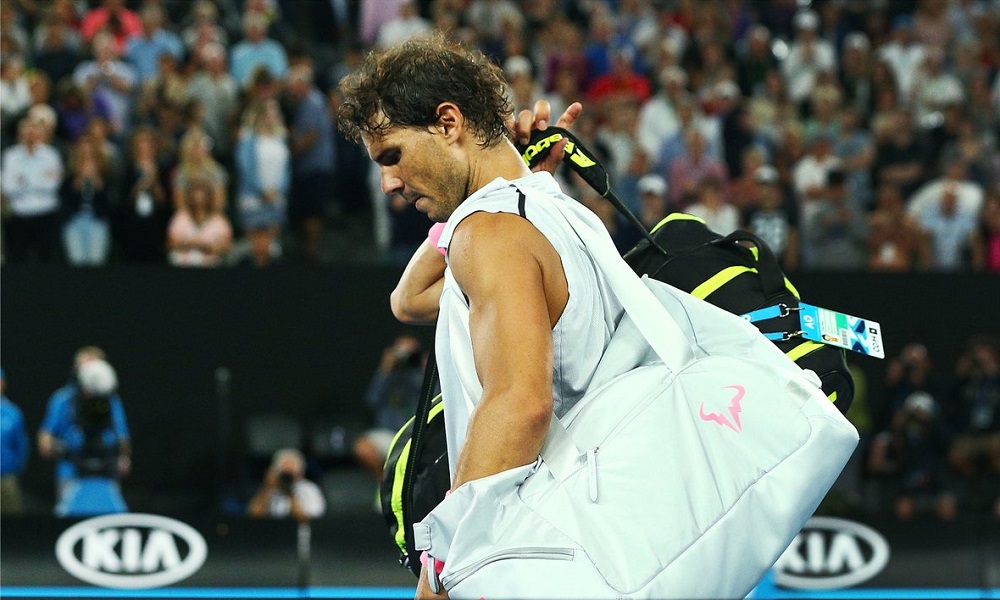 Rafael Nadal can’t seem to escape injury on the tennis court, but this time it wasn’t his wrist that knocked him out of the Australian Open quarterfinal match. Good news is that he’ll be returning to practice in two weeks.

One point after his medical timeout in the fourth set, Rafael Nadal went to the rear of the court to squat and do a knee-raise, trying to stretch out his injured right leg.

Three games later — one point after his subsequent visit from the trainer — Nadal had to delay Marin Cilic’s serve while trying to walk out the pain at the start of the fifth set.

After limping and wincing through two more games, and after failing to fend off a sixth break point, the 16-time major champion was out of the Australian Open.

“Tough moments —not (for) the first time here,” Nadal said. “I’m a positive person, but today is an opportunity lost to be in a semifinal for a Grand Slam and fight for an important title for me.

Injuries to star players dominated headlines before the tournament. Five-time Australian Open finalist Andy Murray withdrew so he could have surgery on his hip. Nadal (right knee), six-time champion Novak Djokovic (right elbow) and 2014 champion Stan Wawrinka (left knee) left their fitness decisions to the eve of the tournament — it’s no surprise they are all out of the tournament.

There are limits to human endurance, and Nadal found his on Tuesday.

“Somebody who is running the tour should think (a) little bit about what’s going on. Too many people getting injured,” said Nadal, who was still limping and grimacing at a post-match news conference. “I don’t know if they have to think a little bit about the health of the players.

“I don’t know if we keep playing in this very, very hard surfaces what’s going to happen in the future with our lives.”

Nadal said the timing and the number of tournaments on the schedule and the proliferation of hardcourts are concerns. Other players have expressed similar views.

Last year’s Australian Open was one for the ages, with Roger Federer returning from a six-month injury layoff and beating Nadal in five sets in the final, and Serena Williams beating her sister, Venus, for the women’s title. Serena opted not to defend her title, deciding she hadn’t had enough time to recover from giving birth to her first child in September. Venus Williams lost in the first round.

This year’s Australian Open is shaping up more as one of discovery. On the women’s side, Angelique Kerber was the only major champion to reach the quarterfinals.

No. 35-ranked Elise Mertens upset fourth-seeded Elina Svitolina 6-4, 6-0 to extend her winning streak to 10 matches, becoming the first Belgian since Kim Clijsters in 2012 to reach the semifinals.

Wozniacki, who is still chasing her first Grand Slam title, can also return to No. 1 for the first time in six years depending on results in Melbourne.

The second-ranked Federer is still in contention for his 20th major, with a quarterfinal against Tomas Berdych on Wednesday. On Federer’s side of the draw, 58th-ranked Hyeon Chung and 97th-ranked Tennys Sandgren are playing for a spot in the semifinals.

Cilic against Edmund was an unlikely pairing on the top half of the men’s draw. Edmund had never played in a major quarterfinal, had never won five consecutive matches at tour level, had lost both of his previous matches against Dimitrov and had never beaten a top-five player.

He checked all those boxes on Rod Laver Arena.

“I am loving it right now, just the way I’m playing,” Edmund said. “My first Grand Slam semifinal. First time I played on one of the biggest courts in the world. To beat a quality of player like Grigor. They’re great feelings. So, yeah, I just try to enjoy it as much as possible.”

Nadal left dejected. It was the second time he had had to retire during an Australian Open quarterfinal — the previous time was against Murray in 2010.

He said he felt muscle pain in his upper right leg in the third set against Cilic but played through it. In the fourth set, chasing a drop shot, he felt the pain get worse “but didn’t realize how bad.”

He had an injury timeout at 4-1 down in the fourth set, and another at the end of the set.

After Cilic broke his serve, the 31-year-old Spaniard went to shake hands with the umpire and his opponent, and angrily hurled his headband into his equipment bag.

Nadal said he would have medical scans Wednesday to determine the exact location and extent of the injury, which he could only describe as being high on his right leg but not in the hip.

Nadal had a delayed start to the season because of an injured right knee but appeared to be in good form through the first four rounds. He now hasn’t won back-to-back Australian Open quarterfinal matches since 2008 and ’09, the year he won his only Australian title.

“Unbelievable performance from both of us and really unfortunate for Rafa,” said Cilic, who had only beaten Nadal once in their previous six matches. “He’s such an unbelievable competitor. He always gives his best … it’s very unfortunate for him to finish this way.”

The good news is that Rafi always bounces back quickly, it’s being reported that he will start practicing again in two weeks. Nadal underwent an MRI on Wednesday in Melbourne and learned that he had a Grade 1 injury to his inner hip muscle near his right leg. That two weeks will give Nadal a chance to focus on physiotherapy.

It was only a year ago that Nadal made it to the Australian Open final before Roger Federer beat him in five sets.