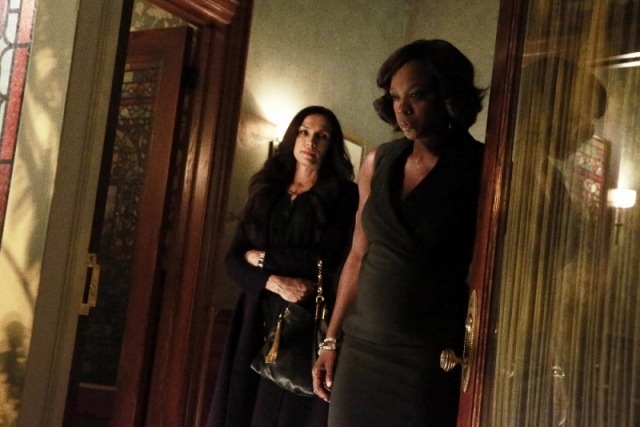 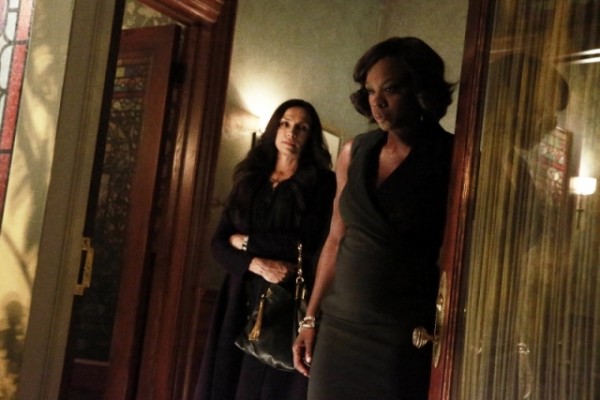 On this week’s “How to Get Away With Murder” (HTGAWM) it is goes from zero to 100 real quick.

Picking right back up where it left off, at the end of the last episode we saw Caleb and Kathryn’s aunt the two siblings Annalise is representing for the murder of their parents, had her throat slit in her car. The brother was seen coming back in from a “run” while the sister was painting of course, the are suspects.

When they are questioned by Annalise as to their whereabouts that night, Caleb lies and his sister backs him up. Annalise knows something is not right.

Eve and Annalise secretly meet in her car and she asks about Nate’s trial to which Eve tells her to stop micromanaging. They also talk about how much fun they had on their special night.

In the court room, since the prosecutor Ms. Sinclair found out from Asher that Eve and Annalise have a “friendship,” she brings it up in court, making Eve answer for it. Things get really heated and she calls for Eve to be removed from the case because it is clear that she and Annalise are in cahoots she helped Nate kill her husband.

Things cool down and the next day at trial, Annalise is called to the stand as a hostile witness. The Keating Five are in the courtroom trying to keep calm. After the first line of questioning gets too heavy, during the break Annalise gathers herself in the bathroom stall crying. Bonnie interrupts her moment with news that the siblings’ warrant has to do with Caleb’s DNA being found in their aunt’s car. “Always bringing me problems, never solutions” is what she tells Bonnie. Hmmm, someone is a little resentful.

West is tasked with taking Kathryn to work on what really happened the night of her aunt’s murder. He tricks her into telling him the truth, admitting that Caleb did leave. Meanwhile Bonnie talks to Caleb and he admits that he was only gone for 30 minutes but was nowhere near the crime scene.

Annalise is back on the stand and Ms. Sinclair takes her to task about the night of Sam’s death. It leads Annalise to go off on her while on the stand which played right into the prosecutor’s hand. When asked who she thinks killed her husband, Annalise says Nate which pisses him off. Behind closed doors, Nate tells Eve he’s not going along with their game, “find another way.”

Back on the stand, Eve batters Annalise about being a liar and a lot of other personal stuff. She makes a very convincing argument actually laying out everything that happened to a T and Annalise says nothing.

After what happened on the stand, Michaela realizes that if Frank was able to transfers Nate’s prints onto Sam’s ring, then the police could have done the same thing with Caleb’s which they found out is exactly what happened. The cops ran two separate DNA tests.

When Annalise goes to court for the siblings, brings up the two DNA tests. The judge rules that it is valid and the two are off the hook for the aunt’s murder.

As far as Nate’s case, because of Ms. Sinclair need to put Annalise on trial for Sam’s murder, the judge has no choice but to rule that there is not enough evidence to try Nate.

Eve shows up at Annalise’s house and they have it out. Annalise wants to know why she said those things while she was on the stand and asked if it was just to hurt her.  Eve tells her that in part it was because she still loves her. Annalise tells her that she was the best thing that every happened to her, the most beautiful thing to ever happen to her and they get it on.

The next morning, while Eve Leaves Annalise’s house, she invites Annalise to come to New York with her because she can’t stay in Sam’s house forever. She gives her a goodbye kiss and what do you know, Nate is staked out and sees the whole thing.

Back at Oliver’s place, he breaks down and tells Connor how he got the HIV. It happened after Connor cheated on him and he had a one-night stand. Connor is crushed because he feels that he is to blame.

Asher doesn’t know how to keep his big mouth shut and tells Ms. Sinclair that he and he team won and brags out going to make love to his lady to which she tells him to let Bonnie know that she is now the prosecuting attorney on the Hapstall sibling case.

Michaela gives into a guy who tried to get her number at the courthouse and they go on a date. What we find out while they are playing pool, and because West was roaming around at Rebecca’s apartment, is that they know each other (he was in one of her pictures) which makes me pretty sure he is eggs911.

We also get a deeper look into that big plot twist at the end of the season and it is clear that once again, the Keating Five have something to do with it.

It’s all kinds of juicy. Are you here for it?