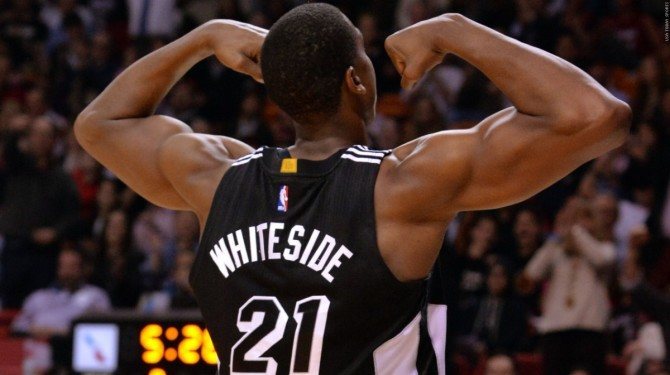 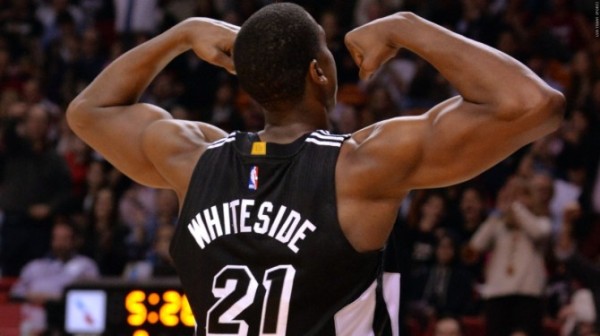 You know Whiteside is asking the same thing.

“I’m just really trying to get my NBA 2K rating up,” said Whiteside famously after recording a triple-double including 12 blocks in a win over the Chicago Bulls last season. Whiteside also tweeted out his thanks to the video game after discovering his rating for this season.

But all jokes aside, Whiteside is doing all the right things to become the next superstar in the NBA. No, he’s not there yet by any means, but he’s definitely on the right path, and he has the supporting cast to make it there.

“He was just saying, ‘Keep working,’” Whiteside recalled from his conversation with current Heat executive and Hall of Fame center Alonzo Mourning. “He was just talking about coming in and just putting in the hard work every single day.”

Whiteside definitely understands the need to put in work. He wouldn’t be where he is today if he hadn’t been grinding for years.

Whiteside played his college ball at Marshall University where it didn’t take long before he gained national attention as a shot blocker and dominant big man. After one season in college, Whiteside was the 3rd pick in the 2nd round of the 2010 NBA by the Sacramento Kings.

A couple of assignments to and recalls from the NBA D-League and a knee injury later, Whiteside was waived by the Kings in 2012 in what looked to be likely the end of his NBA basketball career.

But Hassan never quit. He kept the dream alive by bouncing around the D-League, eventually going to Lebanon and then China. The Memphis Grizzlies picked him up at two different points in 2014, but that didn’t last long, and Whiteside found himself back in the D-League both times after being cut.

Finally, the Miami Heat came along. The team signed Whiteside on November 24, 2014, assigning him to the Sioux Falls Skyforce of the D-League a few weeks later only to recall him in two days. Then, on January 4, 2015, in a game against the Brooklyn Nets, Whiteside stunned the league with 11 points, ten rebounds, and five blocks—his first NBA double-double.

The rest is history. Since then, he has continued to leave it all on the court, and the name Hassan Whiteside has started to become a household name amongst NBA fans. The crazy part is he’s still got a lot of room to grow. Whiteside is using Heat legends as role models to get there.

“He basically told me, ‘This is how I used to get a lot of lobs to Shaq,’” said Whiteside, recalling a conversation he had with Dwayne Wade, who won the 2006 NBA Championship with the help of the great Shaquille O’Neal. “I just kind of listened to that and try to do it that way. It’s crazy. I remember watching them in high school. Now I’m playing with him. Who didn’t watch Shaq and D-Wade? I was practicing on a little hoop outside, but it’s crazy that it’s actually happening.”

You could definitely draw a lot of comparisons between Whiteside’s style and that of Shaq, but he has a long way to go before he even deserves to be mentioned with the Big Diesel.

Whiteside is shooting 76.3 percent from the field through the first four game of this season—the best start of any player since 1986. It’s a little ridiculous to expect him to maintain that, but if he can stay above 60 percent for the season, keep those rebounds above 10, and maintain Dikembe Mutombo-level blocks, then I have no problem talking about him as one of the top 15-20 players in the league today.