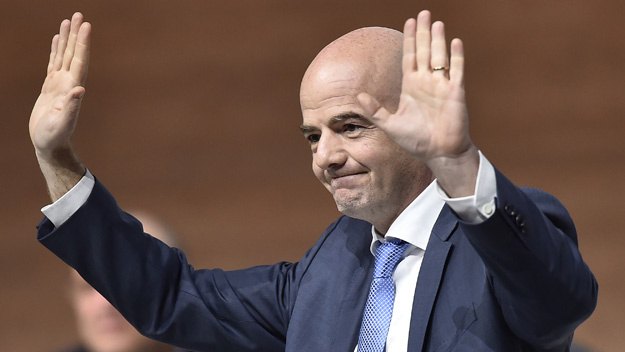 Gianni Infantino has won the elections after securing 115 votes in the second round of polls. The 45-year-old will succeed Sepp Blatter after his removal from the helm of the football governing body.

The 45-year-old Swiss thanked everyone and vowed to restore the image of FIFA.

“Dear friends, I cannot express my feelings in this moment,” he said in his acceptance speech.

“I told you I went through a journey, an exceptional journey, a journey which made me meet many fantastic people, many people who love, live, breathe football every day.

“We will restore the image and respect of Fifa.  People will applaud us, applaud you for what we will do.

“Everyone has to be proud of what we will do at Fifa. I want to thank you all, all 209 and the other candidates. Tokyo [Sexwale] decided four can win; one cannot win. We had a great competition, a great sign of democracy in Fifa.

Infantino stated that he’s had experience from travelling all over the world and he will do his utmost best to put football at the centre of the stage once again.

“I want to be president of all 209 [member federations]. I have travelled the globe and I will continue to do this. I want to work with all of you together in order to restore and rebuild a new Fifa where we can put again football at the centre of the stage.”

Sepp Blatter and many FIFA officials were sacked from their office for corruption charges. Blatter was suspended for eight years from all football activities which was later reduced to six years. Ex-UEFA president Michel Platini was also removed from his position in December last year.

FIFPro, the world players’ union wasn’t happy and they released the following statement:

“FIFPro takes a dim view of today’s FIFA election that leaves the new President, Gianni Infantino, entrenched in a governance structure and culture that is open to corrupt practices.

“Despite a package of reforms approved today by FIFA, FIFPro fears placing increased power in the hands of FIFA’s 209 member associations lies at the heart of the problem. These organisations are not representative of the game and, yet, wield enormous influence over issues that affect key stakeholders such as the players, fans, clubs and leagues. The newly-adopted reforms failed to address the fundamental issue of making football authorities accountable to the game’s most important actors.”