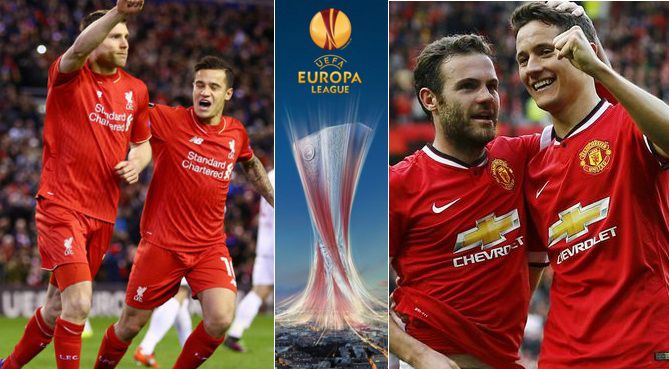 Manchester United were the 5 – 1 winners in the second leg of their Europa League tie against Danish side FC Midtjylland. Their opponents in the next round, Liverpool defeated Augsburg 1 – 0 on Thursday and have advanced to the last 16.

Not many major upsets in the round of 32 of the Europa League. The draw for the second knockout stage was made on Friday, and the first leg of the fixtures will be played on March 10th. The Red Devils will meet Klopp’s men over two legs for the very first time despite a century-old rivalry between the two clubs.

The Merseyside giants haven’t beaten Van Gaal’s United in the last few derbies. Liverpool’s German boss claimed that he wanted to be pitted against the 20-time English champions in order to avenge the 1 – 0 loss in January.

“It’s great,” Klopp told a news conference. “We deserve these games. It’s not easy. I told my staff yesterday that I wanted Manchester United.

“It gives us the chance to make it better. In this round, there are no easy games. Manchester United? Good.”

Borussia Dortmund vs. Tottenham will be another interesting fixture to look forward to next month. Spurs are a completely different side under Mauricio Pochettino, but they have a very stern test as Thomas Tuchel has transformed the Black and Yellows into a terrifying force once again.

Both these sides are currently second in their respective league tables. Tuchel believes that Spurs will prove to be difficult opponents.

“We look forward to two exciting games, I am personally looking forward to a meeting with a special coach and also the special atmosphere in the second leg at White Hart Lane.”

Dortmund captain Mats Hummels is confident of his team’s chances of getting through to the next round.

“This is a super draw, exactly what we imagine for the Europa League and what we wanted after Porto.

“We are very happy. I see good chances on getting through, but we will have to deliver.”

Valencia and Athletic Bilbao are the only two same league teams pitted together. There is a possibility that Gary Neville might come across Manchester United in the quarter-finals if both the sides go through. The legendary right-back has started getting positive results out of Los Che after an unimpressive start in the La Liga.

Lazio meet Czech club Sparta Prague while Fenerbahce meet Braga. The Swiss club FC Basel will face Unai Emery’s Sevilla in the round of 16. Sevilla are the reigning champions and are on course to lift the Europa League trophy for the third successive year.

Shakhtar face Anderlecht while Villarreal meet Bayer Leverkusen next month. Europa League seems to be a much more eye-catching competition this season as many top teams are still involved, and thus there is a good possibility of a big match in the final at St. Jakob-Park on May 18.