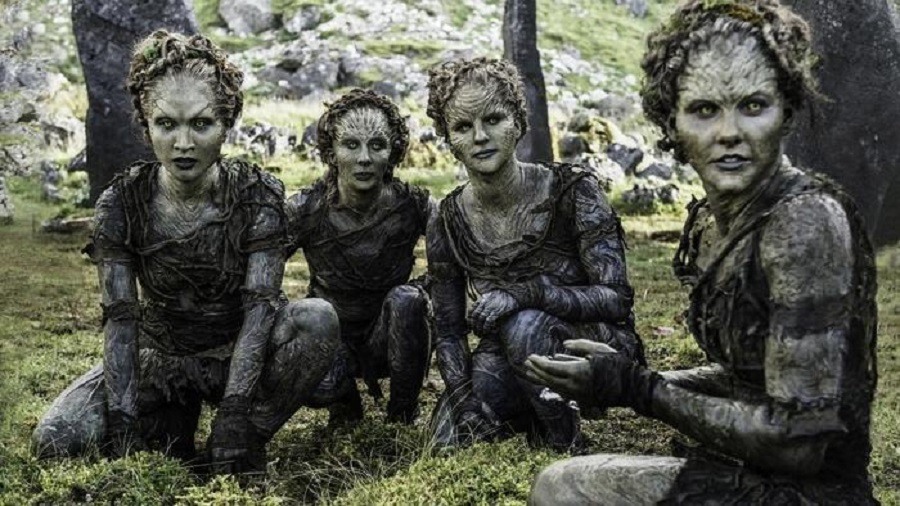 Whatever plans Petyr Baelish had of hooking up with Sansa on “Game of Thrones” in the future are over in The Door! He got an earful when they met face to face for the first time since he basically handed her over to the monstrous Ramsay Bolton. 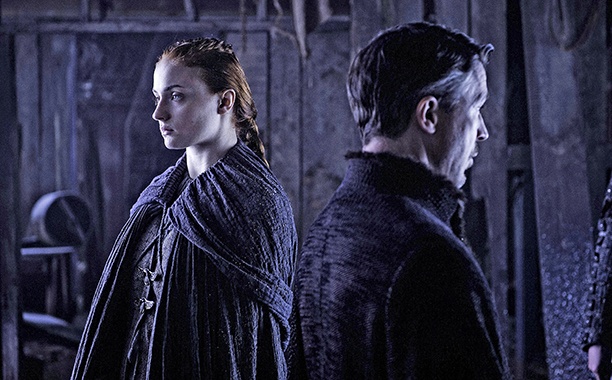 Sansa gives him brutal details of what happened to her as a result of his actions. Littlefinger is fortunate he didn’t have his head kicked in by Brienne as she stood guard.

Petyr is dismissed by Sansa, but before he leaves he tells her of forces still loyal to the Stark name. 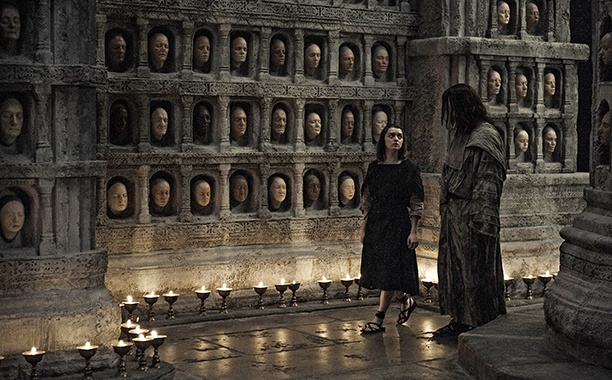 The other Stark girl is having a rough go as Arya gets her Cus D’Amato type training. Even with her sight back, she’s taking a beating. Arya is given a mission by Jaqen H’ghar and told it will be her last chance to follow orders.

She is to kill an actress named Lady Crane. Sounds easy, until Arya sees the actual play and begins to question if she’s killing the right person. She has to endure watching a re-enactment of her father’s beheading on stage as Ned is painted as a fool.

I’m betting Arya fails this test as well. She’s already questioning why a decent person is to be assassinated.

Theon wasn’t known for his leadership ability, so I doubted how he’d help his sister take over for her now dead father. But once again Theon shows his Toastmaster skills as he rallies the crowd in Yara’s favor. This epic speech didn’t end with a konk on the head like last time, but he was interrupted by his murderous uncle Euron Greyjoy.

This guy openly admits to killing his own brother and actually gains favor with the crowd by announcing he will build the largest fleet in history. His grand plan is to bed Daenerys and give her his fleet so they can take over the Iron Throne together.

Euron’s rough baptism looked like it might end in his comical death, but he managed to come back from his drowning, unfortunately. His plot to murder Theon and Yara was behind schedule due to his near death experience, and they had time to bounce, taking with them the best ships in the country.

Euron’s next move is a longtail one as he orders a new fleet built. I’m guessing HBO will have wrapped up Game of Thrones by the time this upstart has finished even 25 ships. 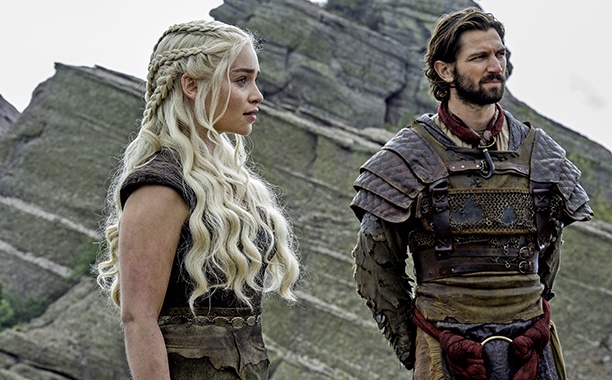 We got one of the most touching scenes ever on GOT as Jorah told Dany about his affliction and openly admitted his love for her.

Even though I felt like Emilia Clarke overdid it a bit, this was a long time coming. Jorah finally got the affection he wanted from his Queen. Well, as close as he was gonna get anyway.

Daenerys ordered him to find a cure for his greyscale then return to her side. He would be needed once she conquered the Seven Kingdoms she said.

With Dany still away, Tyrion is trying to get Meereen under control. He wants the people to know that the new peace, even if fragile, is due to Dany’s efforts. Apparently this message is to be sent by a familiar looking sorceress who serves the same god as Melisandre.

Her visions are eerily similar to the ones about Stannis from the Red Woman. This new Red Woman proclaims Dany to be the chosen one she sees in the flames. Not a good sign, judging by the two awful defeats endured by Stannis.

This priestess is no joke, though. She’s wearing the same necklace type that Melisandre has, and she has freaked Varys out by telling him things that she should not have any knowledge about. He is shaken when she tells him she knows about the voice he heard the day he had his junk removed. 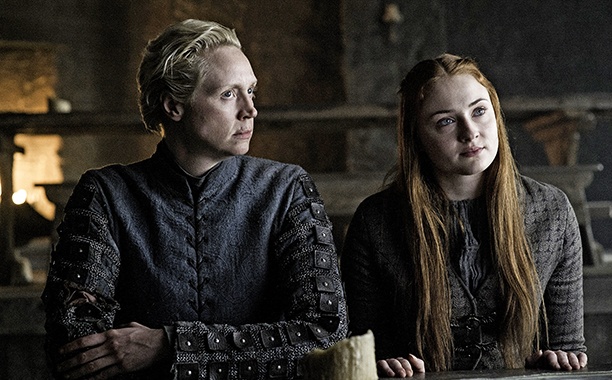 I’ve got a terrible feeling that the Stark campaign to take back Winterfell is headed for disaster. Sansa thinks they will have no problem winning support against the Bolton regime. Davos is much more pragmatic and doesn’t trust the groups who have allowed the Boltons to stay in power to this point. 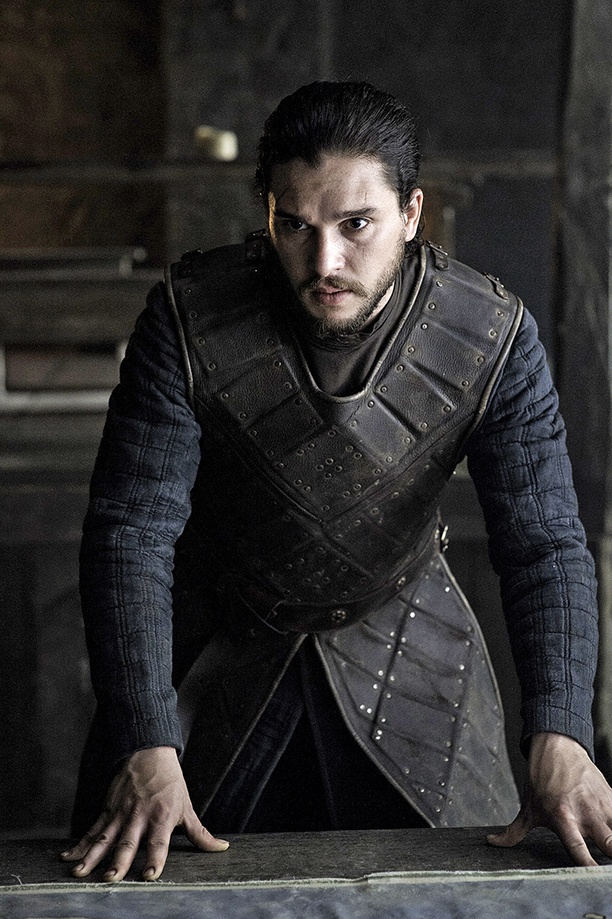 Sansa has made a mistake by not telling Jon about her interaction with Littlefinger. Brienne sees it and calls her out on it. Sansa has dragged Jon into this fight, so she should trust him with any information that could harm him or help him take back their home.

Now for the insanity that is the Bran storyline.

This is going to get stranger each week. So apparently the Night King was created by the little elf women who are helping Bran.

I guess the plan was for these ice men to keep mankind in check. 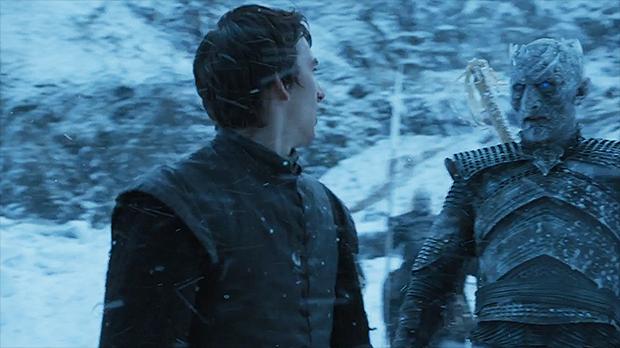 Bran has allowed the White Walkers army to find him and his group by time traveling in reckless fashion.

The result is disastrous. We’re left with one more dire wolf dead. The little elf girls look to be wiped out as they sacrificed themselves to save Bran.

The Three-Eyed Raven was about as helpful in this battle as Hodor giving a TED Talk.

Bran has to warg into Hodor in order to save himself. That works for the time being as he and his friend escape into the snowy night. But Hodor is left holding the door as the zombie army rips at the giant man.

As the flashback continues, we see young Hodor collapse as a young man. A simultaneous result of Bran being inside the giant boy’s future self and back in time with the younger Hodor.

Confusing enough? Told ya we would need Doc Brown with a stick of chalk.

Best to just accept this is how Hodor got his name and move forward. If you try reading up on quantum physics, you run the risk of ending up just like Hodor.

I figured Bran’s power would come to a climax by one day controlling one of Dany’s dragons. Now it appears he could change the course of history by warging into a major character in the middle of a flashback involving that same character.

For example, he could enter Cersei’s mind and have her stop Ned’s execution by smothering Joffrey in his sleep. That would clean up a lot of Westeros’ mess.

I’m afraid “mess” is going to be the operative word the more we see of Bran going forward….and backward.