There was a great deal happening this week on Game of Thrones in Westeros. So let’s jump right in before something else terrible happens to Sansa. Just kill her off already, if she is to never see a bright spot! 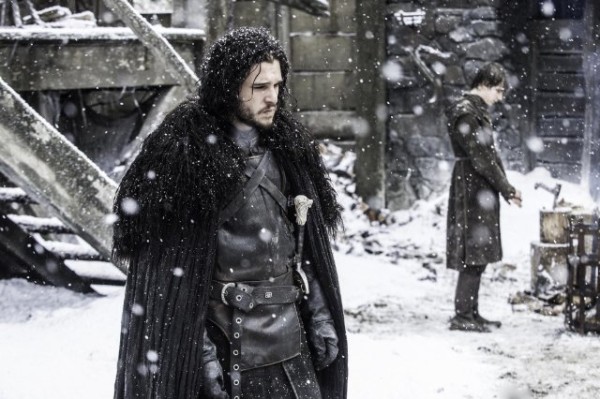 Jon Snow rides off with the defacto leader of the Wildlings, Tormund, on this somewhat hopeless mission. If Mance didn’t think he could get the Wildlings to combine forces with Stannis, it seems doubtful Jon Snow can make it happen.

We see Sansa wake up with bruises on her arms as the result of sharing a bed with Ramsay. She is just his victim and begs Theon to help her. She is totally desperate to even ask this man, whom she hates, for help. He promises to light the candle in the high tower to signal for help. He of course does the opposite and tells Ramsay all about it. He is broken and is not coming back to the Theon Sansa knew. This man is Ramsay’s slave. He is Reek forevermore .

The men of the Night’s Watch said farewell to Maester Aemon. Sam gave his eulogy saying the wise man was “the blood of the dragon.” Sam has been left without many friends now at the Wall.

More gloom for Sansa as she strolled along with her hubby Ramsay. She puts him in his place, reminding him that he is a bastard and it was another bastard that gave the royal decree making him no longer a bastard. Ramsay isn’t phased much and informs her of her bastard brother’s rise to Lord Commander at the Wall. I don’t know if that gave Sansa hope or if that is impossible now. After she is shown the tortured body of the old lady who told her “The North remembers,” I don’t see how she could have much hope at all. She did pick up a shank of some sort on their little walk, so maybe she will take matters in her own hands. Doing so would get her killed, unless he could blame the murder of Ramsey on Reek.

We see just how unprepared Stannis’ army is for winter time warfare. His two closest advisers want him to either retreat to Castle Black or sacrifice his little daughter to use the smoke baby monster once again. Stannis isn’t interested in either option. 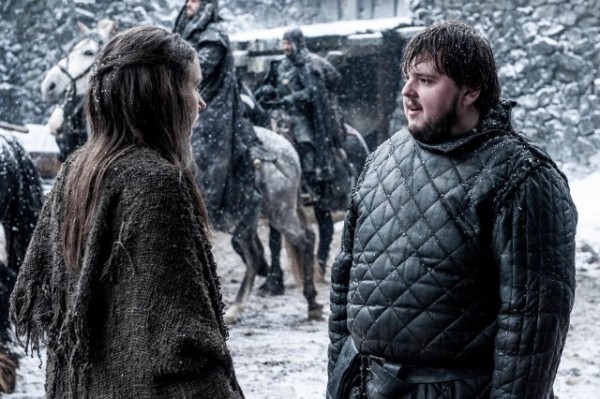 Sam stood up for Gilly as she was harassed by some watchmen. He isn’t much of a fighter, but can take a punch…or ten. Ghost made a cameo appearance to scare off the dudes that beat Sam and wanted to rape Gilly. Sam was shown some real appreciation by Gilly later on.

The irony of Jorah being sold to a slave master was clear as he stood ashamed on the platform as men bid for the right to own him. The hype man selling him had him killing hundreds in past wars and painted him as slayer of Khal Drogo himself. Tyrion was quick to tag along with Jorah, beating the piss out of his handler to show he was a “great fighter” as well.

Olenna Tyrell finds out that the High Sparrow is just what he purports, a religious fanatic. He has no interest in gold or other worldly things. He has the notion that the average Joes will soon lose their fear of the powerful families of the world and the balance of power will shift from the few to the many. This theory is being talked about online in regards to Daenerys never reaching the Iron Throne, but installing a democratic society that spreads worldwide. That’s a theory, not a spoiler.

We got a glimpse of Jaime and Bronn locked up in Dorne. Jaime has no pervasive powers over his daughter who intends on staying there. Bronn is informed by the “most beautiful woman in the world,” Tyene Sand, that he was poisoned during their fight. She is nice enough to toss him the antidote as she teased him, but not before he admitted she is in fact the most beautiful woman he has ever seen. That would have been a cool way for Bronn to die, but I’m glad he is still alive.

The pit fights are just what Dany thought they would be, barbaric. She watches as a nod toward tradition. What happened to only free men fighting though? These guys are slaves! Jorah heads out to do battle once he knows Khaleesi is in attendance. The guy laid waste to all the gladiators and showed his face to Dany. She was pleased with this fighter’s ability, and the fact that he didn’t end anyone’s life in the process. However, she was not ready to forgive him and wanted him removed. Tyrion saved the moment as he presented himself as the gift Jorah spoke of to her. He introduced himself as Tyrion Lannister and flattered Daenerys in the process, giving her the respect of “your grace.” 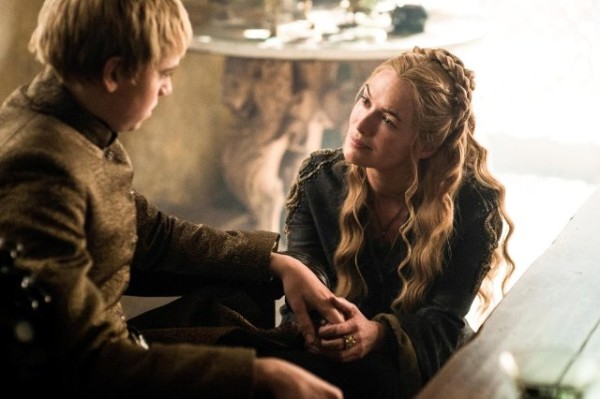 Cersei told Tommen she would speak to the High Sparrow on the little king’s behalf. She really just wanted to rub Margaery’s nose in the fact that she had won. Cersei visited the queen in her cell and acted as though she was concerned, even now keeping up appearances. Margaery is pissed beyond all belief and looking a bit haggard.

Cersei was pretty pleased with herself as she prepared to leave the holy building. She endured some high brow moral talk from the High Sparrow on her way out. However, she took her leaving a bit slow. Petyr had given Olenna some ammo to battle Cersei, which she must have passed on to the High Sparrow. The cult leader tells Cersei about a young man who freed himself of the burdens of sin when he joined the Sparrows. The man he spoke of was of course Lancel Lannister, Cersei’s cousin / former lover. Cersei has to pay for her sins and is tossed in a jail cell herself. It was beautiful! She is devious enough, but does not think very far ahead of the game. The Queen Mother does get off one more verbal blast as she tells the lady jailer to look at her face, as it will be the last thing she sees before she dies. I hate Cersei, but have no doubt that is true.

As I said, lots of action this week. Jorah and Tyrion making it to Dany was a huge step forward. She has to eventually forgive Jorah and Tyrion may prove to be her best adviser yet if she will accept him. Don’t forget about Varys either. Surely he has to be close to Meereen by now. Sansa’s storyline is so dark that I cringe whenever she appears. I’m not going to even mention something positive happening to the girl. There has been no evidence that is going to happen. So until it does, I accept her life as a hell based existence.