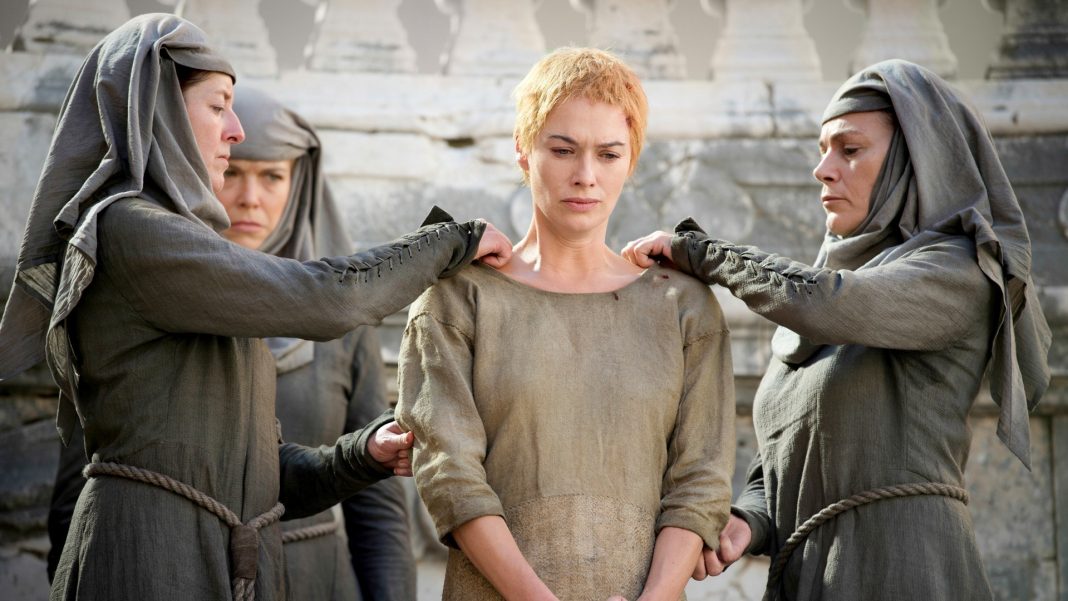 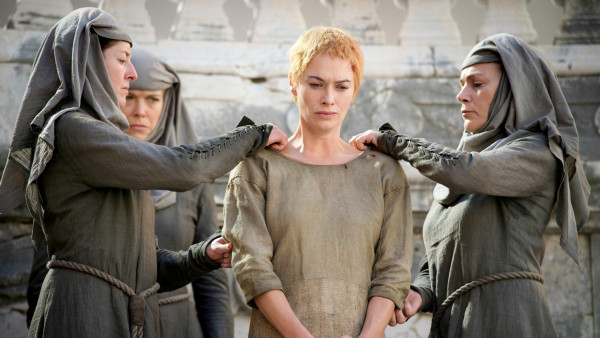 After watching the season five finale of Game of Thrones I’m thinking of how Disney would do this series. Instead of constant disappointment and horror, we would see a musical number at the end of each episode with smiling happy characters. This ain’t Disney! This is the creation of a twisted man named George R. R. Martin who must enjoy torturing his audience.

“Mother’s Mercy” flew by this week and covered a lot of ground. Stannis got what was coming to him after ordering the burning of his kid last week. With half his men deserted along with all his horses he still marched on Winterfell. Big mistake and he had to know the end result. The only good thing that happened to Stannis was having his wife hang herself. When that is a positive you know you have had a bad day, not to mention a terrible wife. Stannis’ rag tag outfit is slaughtered by the Bolton’s mounted army with ease. The aerial shot showed just how foolish this “assault” was in the end.

Stannis survives long enough for Brienne to track him down. She gets her revenge for her friend Renly finally, but misses Sansa’s distress signal. Stannis takes his death like a man as Brienne swings her sword. Those who wanted to see Stannis suffer after what he did to his daughter got robbed a bit since the actual death happened off screen. We get more of Ramsay’s trademarked brutality as he finishes off some wounded soldiers before heading home to his “lonely” wife Sansa.

Sansa Stark is trying to sneak back into her room or flee Winterfell altogether as she is confronted by Myranda and Reek. Sansa says she prefers to die while there is “still some of me left.” That is fine by Myranda who appears ready to kill Ramsay’s wife, but is thwarted by Reek who tosses the brutal bitch over the wall, splattering her pretty little head on the stone below. We’re left hanging here as Reek and Sansa jump off the giant wall presumably into something soft. No way this is a double suicide. 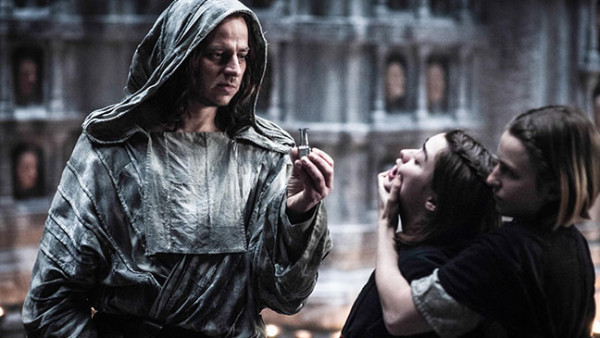 Arya got her chance to mark another name off her kill list as she stood before Meryn Trant with the face of another. We see just how evil this man is as he beats the three young girls before him. Arya takes his lashes without a sound so he sends the other two away. That’s when she pounces on this evil son of a bitch, stabbing him in the eye as she shows him her real face. Epic move that got better with a stab to his other eye, then multiple pierces to his chest. Arya Stark took her time and let him know who she was before she slit his throat sending him to hell. This was great fun for the audience. However the good feeling couldn’t last since she got in trouble with her mentor Jaqen. He acts as though he drinks poison, but Arya sees herself as dead on the floor. Apparently using faces of the dead is like poison and she begins to go blind. Great. We finally have a Stark with the mean streak necessary to survive in this hell hole called Westeros and she is going to be blind or maybe even dead. We’re left hanging on that one until 2016!

Bronn and Jaime are headed home along with Myrcella and Trystane. This seems like a happy resolution to all parties. Jaime even gets a tender moment with his daughter as he tries to tell her he is her real father. She already knows and lets the kingslayer know she is glad. The joy is halted as her nose starts to bleed. Just as I suspected, she was poisoned with the kiss from Ellaria Sand. It’s going to be a tough boat ride home and hard to explain this to Cersei who has had a bad few weeks already. Dropping her dead daughter at her feet will not go well for Jaime. No incest for him anytime soon.

Without Daenarys, the boys are lost. Tyrion, Daario, and Jorah are just sitting around criticising each other on the steps to the queen’s throne. The two warriors are going to look for Dany, but Tyrion isn’t invited since his only skill is talking. That was a great line and the truth for the most part. He is left to help Grey Worm run the city until Dany is found. Varys shows back up finally, so Tyrion will be helped by him and Missandei. It was good to see the crew escaped the stadium after Dany and Drogon fled the scene. They are still left with the terroristic Harpys so maybe Tyrion can figure a way to weed them out. No way all of those guys were killed off at the fighting pit.

We catch up to Daenerys and Drogon, both of which look worse for wear. Drogon is hurt and not in a hurry to fly back to Meereen. There is no telling where they are but Dany decides to head out in search of some food. She is then surrounded by thousands of horsemen that I assume are all Dothraki. She doesn’t appear to be in immediate danger but she is a white haired woman in the midst of apparent savages. This is a formidable army that could be added to her fold or simply replace the battered Unsullied who now are sullied regularly by rivals. Next season will probably see this army making the Mother of Dragons’ army stout enough to begin her march on King’s Landing…..or Dany could get crucified before that ever takes place. I don’t dare put my money on any likable character.

Cersei thought she could confess and be her her merry way. Wrong. She was told by the High Sparrow that she would stand trial for the sins she denied, but he did allow her mercy by letting her head home until the trial. You could see the wheels turning in her head as she thought of her revenge. Then he mentioned atonement. That entailed a bad haircut followed by a walk of shame. Now if I were going to feel any sympathy for this horrible woman this would have been the time. I was not however. This punishment was of her own doing. She put the cult in power that sent her walking through the streets naked through throngs of peasants shouting at her, spitting upon the Queen Mother, and even tossing what looked to be feces at her for good measure. Not a good day for house Lannister. I’m sure many of these peasants had a ton of hatred built up for the former queen who never had much use for common folk.

The visual of Cersei looking toward her castle was to me the best part of the finale. I hate Cersei, but damn she knows how to focus. Imagine walking buck naked through the streets full of scornful people, especially if you were royalty. I certainly didn’t want to root for a character I hate, but it was interesting to watch her struggle to reach a safe haven as she endured the longest walk of her life. She knew if she could just get through those few minutes, she would get to live….and hand out her own atonements. Memo to the High Sparrow: Ain’t gonna be no trial!

After finally making it back to her home Cersei is greeted by her mad scientist who introduces Gregor as the newest member of the King’s Guard. The big guy has taken a vow of silence until all her enemies are vanquished. You could see hope return to the face of the still filthy and bloodied lady as she envisioned the new and improved “Mountain” laying waste to the High Sparrow and anyone who laid a finger on her during her incarceration. 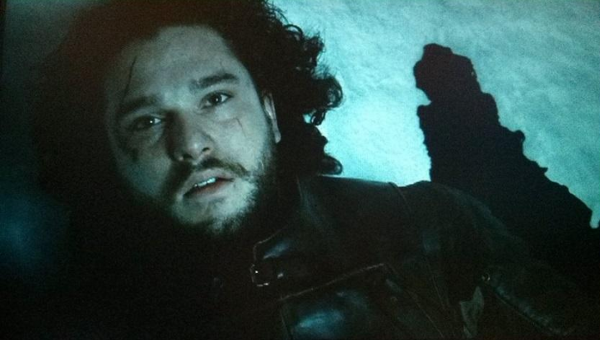 Jon Snow’s death lit Twitter ablaze last night, as if that should have been a shock. He was one of the good guys so what did you think was going to happen? He was good hearted, merciful, and a bit ignorant. That is the perfect recipe to have yourself whacked on Game of Thrones. Snow was set up by his protege Olly and sent to a circle of watchmen to find out news about his uncle from season one. First off, how he could think this guy was alive is beyond me. But that was irrelevant. Snow could have been set up in any number of ways. He ended up stabbed by a handful of his brothers, including Olly, in front of a sign reading “Traitor.” Trying to save all mankind still didn’t justify helping the Wildlings in the eyes of Jon’s  brothers. Jon’s role as Lord Commander of Castle Black ended as he bled out into the white snow.

I guess next season I should root for Cersei since anyone who is moral will never win in the end. There is historic evidence of that from each season so far. There is no happy ending coming, which is fine. There is too much of that in TV and film. I want to be shocked even if it means good guy after good guy has to be sacrificed. If I jump on the Cersei bandwagon, she may end up on the moral side, as far fetched as that sounds. Then that will lead to her undoing. It’s probably best to enjoy Game of Thrones like a Super Bowl with two teams you don’t care about. Just hope for an entertaining contest.

Look for the season long wrap up next week. A mild spoiler is below….you have been warned.

SPOILER ahead: I made the mistake of checking Twitter after the end of the finale to see a little Jon Snow reaction. Any search like that can spoil you so I knew it going in, but dove headlong into the fray regardless. There is either a theory or book knowledge that has Milesandre raising Jon from the dead. I only recall her taking lives, not reviving anyone. But I guess anything is possible with a red headed witch.

Our Australian guy Luka Alaria wrote a piece on some things to expect in the finale, and he was dead on with Jon Snow’s death. I had to get in touch with him immediately, and he let me know that Snow is not gone and he will be resurrected as the show will follow this part in the Game of Thrones books. Now that Milesandre is basically adrift again, this will give her more time on the show. Plus the fact that the actress who plays here, Carice van Houten still has a contract. So you’ve been warned/consoled not to mourn Jon Snow for long.